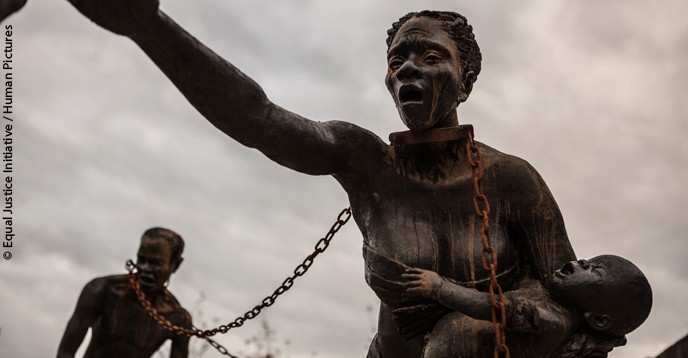 Detail of a sculpture by Ghanaian artist Kwame Akoto-Bamfo. Dedicated to the memory of the victims of the transatlantic slave trade, it is on display at the National Memorial for Peace and Justice in Montgomery, Alabama.

In May 2019, the news that archaeologists had discovered the wreck of the Clotilda – the last recorded slave ship to arrive in the United States, fifty-two years after the international slave trade had been outlawed – made headlines around the world. But all the attention focused on the ship’s owner, its captain, and the ship itself, rather than on the victims of this appalling journey.

It all began in 1859 in Mobile, Alabama, when planter and ship captain Timothy Meaher bet that he could bring in “a shipful of niggers” right under the noses of the authorities. By then, the slave trade to the United States – which had been legally prohibited since 1 January 1808 – could only be conducted illicitly, with offenders risking the death penalty. Nevertheless, the trafficking continued unabated and demands to reopen the slave trade had grown since the 1840s.

Short of labour for their expanding cotton and sugar plantations, slave-holders in the Deep South had to buy enslaved labour from the Upper South, at prices they considered exorbitant. A man sold in Virginia could fetch $50,000, whereas a smuggled African could be bought for $14,000. Meaher recruited and financed William Foster, the builder and owner of the Clotilda. As an improvised slave-ship captain, Foster arrived in Ouidah, in the kingdom of Dahomey, on 15 May 1860.

The terrible ordeal of the 110 children and young adults – half male, half female – who became the Clotilda’s prisoners, had begun a few weeks earlier. After a deadly raid by the Dahomey army on a small town, a group of survivors were brought to Ouidah. Among them was 19-year-old Oluale Kossola, who was later renamed Cudjoe Kazoola Lewis. Others, including a group of traders, had also been kidnapped.

The prisoners came from various areas of Benin and Nigeria, including Atakora, Banté, Bornu, and Dahomey. They belonged to the Yoruba, Isha, Nupé, Dendi, Fon, Hausa and  Shamba ethnic groups. Among them were Muslims, and initiates of the Oro society, or Orisha convents. All of them had been brutally snatched from their families and communities, and held in a barracoon, after Foster had selected them from among hundreds of captives.

As Ar-Zuma, Oroh, Adissa, Kupollee, Oluale, Abache, Omolabi, Sakaru, Jabar, and their companions set foot on the Clotilda, they were stripped of their clothes, as was customary on slave ships. The humiliation and the suffering they endured was such that even fifty years later, they could not bring themselves to speak about it – except to say that they were very thirsty, and that two people had died.

Hidden in a swamp

On 8 July 1860, after forty-five days at sea, the captives arrived in Mobile, under cover of night. To remove any trace of the landing, the Clotilda was set on fire. Even so, news of the “secret” arrival spread from coast to coast. The federal government was forced to intervene, and a crew was sent to search for the young Africans. They had been hidden in a swamp, completely naked for several days, until some rags and skins were handed out to them when they were discovered. A sale was organized discreetly, and the group went through another heartbreaking separation. As some of them were leaving for places that were far away, they all sang a parting song, wishing each other a safe journey. About seventy-six people were divided between Meaher and his two brothers, and Foster.

The cases against the slave-owners were ultimately dropped, and the “ship-mates” – as Africans who travelled on the same slave ship generally called each other – were put to work, openly, on steamships, in the fields, and as domestics. They were a tightly-knit community, and were said never to accept brutality – they stood up to authority and were unafraid of the consequences. An African American enslaved on the same plantation as some of the newcomers recounted that once, when a supervisor tried to whip one of the women, they all jumped on him and beat him up. When a cook slapped a young girl, she screamed. Her companions ran to her rescue, tools in hand, and banged on the door of Mrs Meaher’s bedroom, where the cook had taken refuge. Often mocked by their enslaved companions born in the US, the Clotilda passengers kept to themselves and continued to adhere to their original cultures – including their funeral rites.

In April 1865, at the end of the Civil War, the ship-mates were finally free. But it was not the kind of freedom they had longed for. They wanted to go back home. As one of them, Ossa Keeby, said, “I go back to Africa every night in my dreams.” The men found work in the lumber-mills and powder-mills. The women, who were self-employed, made their living gardening and selling their produce, and the baskets that the men wove at night. They saved their money to pay for their return. When they realized they would never make enough, they sent Cudjoe Lewis to ask Meaher for some land. They argued that they had families, homes, and land before he had forcibly brought them to Mobile and made them work hard for nothing, for five years. Meaher refused.

Redoubling their efforts, the ship-mates accumulated enough money to buy plots from the Meaher family and other local owners. By 1870, they had established a small village in Alabama that they proudly called African Town – it was later renamed Africatown.

It was a clear way of demonstrating who they were, who they wanted to remain, and where they wanted to be. To manage their settlement, they elected a chief, Gumpa, who was a nobleman from Dahomey, and two judges. They built the first church and the first school in the area and some of them learned to read and write. They also stayed in touch with the ship-mates, some of whom lived several counties away. As they married within – and sometimes outside – the group, a second generation was born. They were given one American name and one African name. These children learned about their origins – some were fluent in their parents’ languages and even acted as translators. The ship-mates talked fondly about their hometowns – which became a paradise, a refuge, for the children, where they could go to in their dreams when white racism and black derision became too hard to bear.

Having stood up while they were enslaved, the people of Africatown continued to fight for their rights. When the men decided to vote in elections in 1874, an incensed Meaher blocked their way. Undaunted, the men walked from polling station to polling station, finally succeeding in casting their ballot. Kohenco, who ran a dairy farm with her American husband, became a member of the first reparations movement that sought pensions for freed people. In 1902, Lewis was hurt by a train and sued one of the largest corporations in the South. Against all odds, an all-white jury awarded him $13,000, but the judgement was overturned by the Alabama Supreme Court. Gumpa also sued, after being injured by a train. He died before the case went to court, but the claim was later settled, with a small amount of money awarded to his grandchildren.

When the ship-mates were interviewed, starting in the 1890s, they systematically refused to belittle their former religions, or to criticize polygamy.  They also refused to condemn those who had taken them prisoners, attributing their fate to “bad luck”. They patiently, and sometimes exasperatedly, explained and defended their cultures. Asked whether they preferred Mobile or their erstwhile homes, they forcefully picked the latter.

When Emma Langdon Roche, a teacher,  told the last survivors, now in their seventies, that she wanted to write about their lives, they asked to be called by their original names –  so that if the story reached home, their relatives would know they were still alive. The book, with their photos taken fifty-four years after their brutal uprooting, was published in 1914. The author, Zora Neale Hurston, also interviewed Lewis at length and filmed him in 1928. Cudjoe Lewis, who lost his wife, Abile, and their six children in short succession,  was the last survivor of Africatown. He passed away in 1935, aged 94, and was the second-to-last known survivor of the Atlantic slave trade. Two years later, Redoshi, a woman captured in the same raid, died in Dallas. She too had been photographed, interviewed, and filmed.

The ship-mates of the Clotilda lived in Alabama as much as they could on their own terms. But in spite of their deliberate insularity, they were involved in a series of events that marked their times. Yet, they never lost their deep-rooted sense of belonging to a land and a people far away. Today, the Africatown they created as an alternative, is still home to some of their descendants. But this once-vibrant community has fallen on hard times. Polluting paper mills, streets blocked by factory walls, roads cutting through the neighbourhood – environmental racism has devastated the place. Only the Union Missionary Baptist Church and the graveyard where the ancestors are buried are tangible reminders of the first generation. The residents hope that the discovery of the Clotilda will encourage tourism and result in a much-needed revival of Africatown and its fascinating history.

The shipwreck of the Clotilda, and whatever it reveals, is only a disgraceful symbol of the basis of the economic development of the US. More important is the history of the experience of the young people who lost everything, but transcended their awful circumstances. Through the ordeals of the trans-Atlantic crossing of slave ships from Africa to America, slavery, the Civil War, Jim Crow [the state and local laws that enforced racial segregation in the southern states of the US], and for part of the Great Depression of 1929, they retained their dignity, their confidence in themselves and their abilities, their unity, their sense of family and their pride in their cultures. What is more, they did all they could to ensure that their stories were recorded, shared and remembered. Theirs is a dreadful tale of loss and calamity, but also of triumph over adversity – a story of unsung heroes.