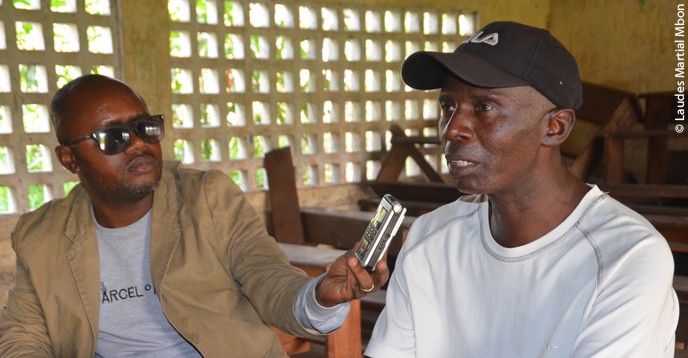 Saturnin Serge Ngoma, a teacher at La Poudrière primary school in Brazzaville, Congo, gives geometry and grammar lessons to a seriously overcrowded class every day. Teaching in a school that lacks everything is a constant struggle.

In the dusty courtyard of La Poudrière primary school, the cries of the children have been temporarily silenced since the beginning of June, with the start of the holidays. Only the roar of airplane engines at Brazzaville's Maya-Maya Airport – whose runway is separated from the school by a simple paved road and a few houses – occasionally disrupts the tranquility of this hot summer afternoon.

Just a few weeks ago, seventy-six students, twenty-seven boys and forty-nine  girls, crowded every morning at 7 a.m. into the first-year elementary school class (CM1) – the penultimate level of the primary cycle – taught by Saturnin Serge Ngoma. “If I add the six children I have at home, I took care of eighty-two children this year. Exhausting!” smiles this almost six-foot-tall giant, sitting at the foot of a mango tree.

The primary school – named after this neighbourhood where a powder magazine [gunpowder store] was located before independence – was Ngoma’s very first post after he was recruited by the state in 2017. “You could say that I was spoiled,” he says, pointing to the school premises – two makeshift shacks that house six classrooms, surrounded by tall grass and vegetable gardens.

On rainy days, the clay courtyard turns into sticky mud. The school is not enclosed. During the year, teachers give their classes with the doors open, under the gaze of passers-by who cross the courtyard to walk from one part of the neighbourhood to another.

The reign of making do

Everything is lacking in this school, which has no fences and no latrines. Before more tables were found at the start of the school year, Ngoma’s students were packed in, four to a desk. The others sat on the floor. Faced with such deprivation, making do was the order of the day. “The students collected small planks here and there, on which they settled. It was really not an easy situation,” the teacher sighed.

The children also have to share the few textbooks available at the school, getting together in groups of three or four to do exercises, or during reading time. The situation is all the more critical because many students are experiencing learning difficulties. Learning French is particularly hard for them. “I have to pay close attention during the reading exercises because some students don’t have a good grasp of the language and so they recite something other than the text – they make it up.”

Nor is it easy to enforce discipline among such a large number of pupils. Ngoma has his own special methods to avoid being overwhelmed. The first is to send his most restless students to the blackboard. “They’re afraid they won’t know how to do an exercise in front of the others, so they make sure they don't get themselves into that situation. If they don’t behave, I also give them punishments – verbs to conjugate, and  in the most extreme cases, I send them outside to clean the yard.”

In spite of these precarious conditions, sixty-two students from Ngoma’s class successfully moved up to the next grade at the end of the school year. He takes pride in the fact that one of his students topped the whole school, with a 12.5 overall average.

A graduate with a master's degree in sustainable development economics, this 40-year-old teacher came to teaching late – after working as a security guard and giving courses in private institutions. Yet, in spite of his demanding daily routine and a paltry salary, he has no intention of changing professions.

In September, he will take the same road he walks every day for half an hour to get from his district of La Frontière to La Poudrière. “Mr Ngoma always tells us that he doesn't know many people who have succeeded without going to school,” Guelor, one of his former students, sums up.