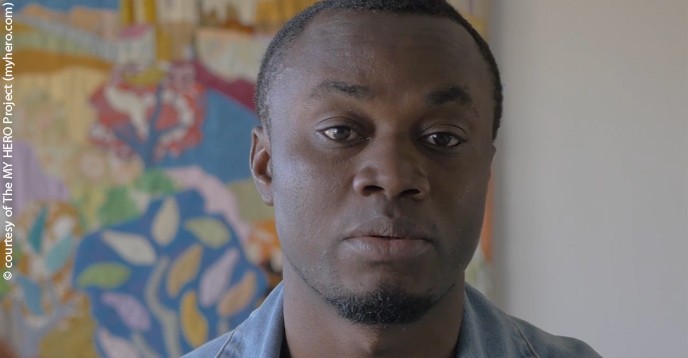 A still from the short film Mohamed Sidibay: Teaching Peace, directed by The MY HERO Project, a non-profit educational organization based in the United States.

Orphaned at the age of five, Mohamed Sidibay became a child soldier during the civil war in Sierra Leone, and owes his survival to school. A tireless advocate of education, particularly through the Global Partnership for Education, he tells the story of his debt to a teacher who knew how to reach out to him.

You were recruited as a child soldier at an early age. How were you able to go to school?

It was in 2002, a year before the end of the war in Sierra Leone. I was part of a United Nations Children’s Fund (UNICEF) programme for the Disarmament, Demobilization and Reintegration (DDR) of child soldiers. I was nearly 10 at the time, and had never been to school. All I knew was how to load an AK-47. But UNICEF made sure that I received an education by providing my primary school with books, pencils and equipment. Without this help, the story of my life would undoubtedly have been very different from what it is today. Going to school has aroused my curiosity to learn, and it is this curiosity that continues to be my driving force today.

After what you had been through, what were your first days at school like?

The first time I sat in a classroom, I felt lost. I was upset. I didn't feel like I belonged. But above all, I felt alone. At the age of 10, most of the children who were there knew how to spell their names, read, write and count. I didn't know how to do any of that. I was ashamed and didn't feel welcome among them. But I stayed, not because I was aware of the importance of education, but because school, in spite of everything, was the safest place for me.

What was your relationship with the teachers?

Having grown up during the war, I did not trust adults. When I came into contact with them, my only goal was to make myself very small, so as not to attract their attention. Being invisible is the only way to survive a civil war. At first, my relations with most of my teachers were not good. Their anger at losing everything during the war, my frustration with what I had lost myself, and my fear of adults, made relationships difficult. I was very tempted to give up everything.

Do you remember any teacher in particular?

When you are only one of eighty students in a public school in a slum, you are just one face among others. But one teacher left a lasting impression on me. She was special for many reasons. As a homeless child, I had nothing to eat at lunch-time. So, from time to time, she would share her meal with me. In class, she didn't make me come to the blackboard because she knew that, as I couldn't read, the other students would laugh at me.

And then she had the good idea of making me sit next to the brightest girl in my class, who  became my tutor. And even though the teacher knew what my life was like outside her classroom, she always asked me about my day. When she realized that I didn't like school, she had the intelligence not to force me. In fact, she did her best to make me feel safe. She knew that if I felt good, I would keep coming to school. And she was right. It is by this kind of attitude that you recognize a good teacher.

In your opinion, how should teachers approach children suffering from trauma?

There is always a time when wars come to an end. But the scars they leave on the lives of men and women last a lifetime. Teachers are the architects of the reconstruction of society. Their job is not only to pass on knowledge, but also to make sure that children feel safe. They must  understand that children like me come from a world where adults have not only failed to protect them, but also robbed them of their childhood and innocence. The first thing we see when we enter a classroom is not teachers but adults, ready to exploit us once again. The role of teachers is therefore to restore our confidence. At first, we do not go to school with a desire to learn, with the idea of growing up and becoming better citizens. Sometimes all I needed was someone to sit next to me.

How can we help teachers to meet this challenge?

It requires resources. Teachers working in war zones or in post-conflict regions often lack adequate training. In fact, their work is less about passing on knowledge than about retaining students until the end of the year. If they do not manage to inspire their pupils, it is not because they lack imagination, but because maintaining discipline becomes more important. This is why teachers must be given the means, particularly through appropriate training, to play their full role with children who have suffered.

Better training for teachers who care for traumatized children