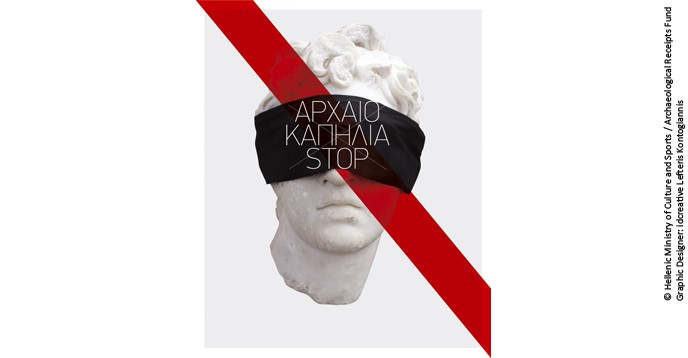 Poster of the exhibition “Trafficking of antiquities: Stop it!!!”, Archaeological Museum of Thessaloniki, 2012.

Since the adoption of UN Security Council Resolution 2199 in 2015, which calls for the prohibition of trade in cultural property from Iraq and Syria, efforts have been intensified to disrupt terrorist financing through the illicit trafficking of antiquities. A global movement launched by UNESCO urges Member States to introduce more stringent legislation.

The cultural goods market is a grey market, where clean and dirty goods circulate together. While it is difficult to estimate the value of the illicit market, it is possible to get some idea of the scale. Speaking to the International Herald Tribune (15 February 2005), archaeologist John Russell estimated that between March 2003 and early 2005, 400,000 to 600,000 antiquities may have been looted from Iraq, generating between $10 million and $20 million.

Facts and figures on illicit trade are notoriously difficult to document, even in relation to “ordinary” organized crime in relatively stable environments. Such difficulties are multiplied in a conflict with myriad, shifting internal factions and changing external facilitators. They are multiplied even further in cases where the war and the war economy are so interdependent. There are literally dozens of specific, yet baseless, claims in relation to Syria and Iraq alone.

Even when there is documented evidence, it can be difficult to interpret. For example, as the United States Counter Threat Finance and Sanctions explained, on 15th May 2015, US Special Forces in Syria raided the base of Abu Sayyaf, the head of underground resources (oil, gas, minerals and antiquities) for ISIS. They recovered a number of receipts for antiquities that indicated a one-fifth (khums) tax of $265,000 on sales of  $1.32 million in Deir ez-Zor province within four months, which would probably mean taxes of around $800,000 on sales of an estimated  $4 million in a year.

This is a very limited sample, however. The availability and marketability of antiquities and other illicit revenue streams are specific to that region; and the people, materials and activities on which specific earnings were spent are unknown. Nonetheless, in an illicit economy as in a licit economy, all revenue streams support the taxing authorities.

According to the INTERPOL National Central Bureau for Lebanon, trafficking of antiquities from Syria through Lebanon is an organized criminal endeavour, which has increased exponentially through the present war. Yet, in spite of its own challenges in terms of governance and security, Lebanon has been able to dismantle gang after gang, six in 2016 alone. Many more supply lines for illicit antiquities could be disrupted, if other transit and market countries took their responsibilities equally seriously.

There are a few similar successes, although they demonstrate the range of structures and mechanisms for conflict antiquities trafficking. Police in Germany caught a group who, between 2011 and 2014, had been stealing cultural objects locally to support militant groups including Ahrar al-Sham, Junud al-Sham and ISIS in Syria. In 2014, the Civil Guard of Spain caught a group who had been trafficking antiquities from Egypt in order to finance jihadists.

Tragically, there are also notable failures. According to an ongoing investigation by Paris Match Belgique, initially published on 27 October 2016, Khalid el Bakraoui had been ransoming works of art stolen from the Museum Van Buuren in Belgium, to three insurance companies between 2013 and 2015, before his suicide bombing of the Maelbeek metro station in Brussels on 22 March 2016.

Contrary to denials that antiquities from Syria and Iraq are reaching the market, they have been intercepted in Bulgaria (in 2015), Hungary (in 2017), Slovenia (in 2016) and France (in 2016). Antiquities from the war-torn zones have also been intercepted, then released, and even advertised in the United Kingdom (in 2015), as revealed by archaeologists Mark Altaweel and David Gill in the Guardian (July 2015) and on Channel 4 (April 2016).

Although it is not reflected in public evidence, “several countries around Europe” alone have intercepted and repatriated antiquities, as the Director-General of Antiquities and Museums in Syria told Al-Masdar News (May 2017).

At least 300 cultural objects seized between 2012 and 2014 have been repatriated to Syria, the Directorate-General of Antiquities in Lebanon informed  the Daily Star (January 2017). They included objects that had been looted from Palmyra before it was conquered by ISIS, when it was under the control of first the Free Syrian Army, and then the Syrian Arab Republic. Yet tens of thousands of genuine antiquities from Iraq and Syria (and modern fakes, forgeries and counterfeits) have been seized in the region and further afield since 2011 in the case of Syria, and 1990 in the case of Iraq.

An overwhelming majority of looted antiquities have not been restituted to Syria since 2011. This may be due to the technical difficulty of attributing modern state ownership on the basis of ancient cultural style and the deliberate destruction of forensic evidence of the countries of origin by looters, smugglers, dealers and collectors. It could also be attributed to the legal difficulty of international relations in situations of non-recognition of state-like authorities, or to the political exploitation of cultural diplomacy. Iraq is still struggling to recover the antiquities that were looted during the crises that erupted in 1990 and 2003.

Nothing new or unusual 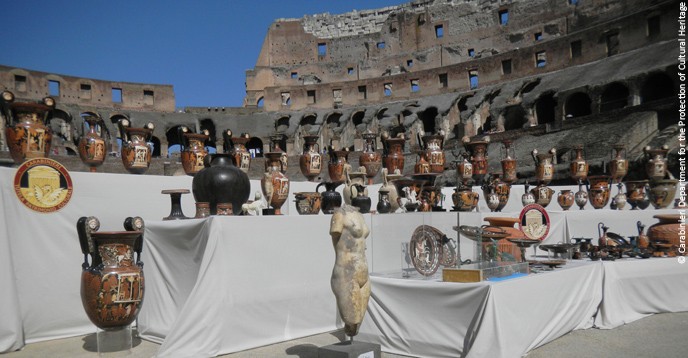 Exhibition at the Colosseum in Rome, in 2010, of 337 stolen works of art which were recovered by Italy’s carabinieri.

To reduce the trafficking of conflict antiquities in the future, it is important to acknowledge the existence of similar trafficking in the past. The situation in Syria and Iraq is not unprecedented or unusual. In the early 1990s, the security services were laundering stolen art through antique shops in Yugoslavia. Right-wing paramilitaries were trafficking art in Colombia. By the end of the 1990s, the Liberation Tigers of Tamil Eelam were selling antiquities to finance their war in Sri Lanka. Around the same time,  the Northern Alliance and the Taliban (which continues to operate today) and some years before that, jihadis and the mujahideen looted, smuggled and racketeered in art and artefacts in Afghanistan. In Lebanon too, during the civil war between 1975 and 1990, militias looted and exported antiquities.

The history of conflict antiquities trafficking as a state crime goes back at least a century-and-a-half. This included payment in kind for assassinations by the junta in Argentina; self-subsidy by the Communists in Bulgaria, or plunder by the Khmer Rouge in Cambodia.

Again and again, conflict antiquities have been supplied to, and consumed by local, regional and global markets. In some cases,  it has happened without effective regulation by the market countries who created the demand and whose markets subsidized the conflict. In others, it has taken place with the complicity of states who facilitated the financing of proxies, allies and other convenient armed groups. It has even happened under the meticulous management of states.

Confronted with such evidence, it becomes impossible to maintain the reassuring myths that conflict financing through antiquities trafficking is not happening at all, that it is not making a difference to the development of those conflicts or that it can be suppressed with exceptional measures against particular organizations. The only way to constrict this kind of trafficking is  through the policing and regulation of the conflict antiquities market.

In response to the terrorist violence of ISIS, al-Nusra Front (ANF) and others associated with al Qaeda (AQ), the United Nations Security Council passed Resolution 2199 in 2015. It consolidates financial sanctions on these groups, in order to restrict their violence by constricting their funding and spending, such as their income from looting, smuggling and otherwise profiteering off the illicit trade in cultural objects.

Since then, Resolution 2253, passed in 2015, has obliged states to report seizures of cultural objects from Iraq and Syria and the outcomes of proceedings against antiquities traffickers that finance ISIS, ANF, AQ and/or their associates. These targeted measures have been complemented by Resolution 2347 of 2017, which requests states to prohibit the trade or transfer of cultural goods from any zone of conflict or context of conflict.

Several states claim to have taken action that contributes to the implementation of the UN Security Council Resolution 2199. For example, Cyprus has revised procedures to facilitate law enforcement. Pakistan has worked to improve the capacity of law enforcement agents to fight illicit trafficking, by disseminating the International Council of Museums’ (ICOM) Emergency Red List of Syrian Cultural Objects at Risk. The Canadian, Czech, French, Macedonian (FYROM) and Pakistani authorities, among others, have also intensified customs controls.

Significant legislative efforts include Germany’s 2016 Act on the Protection of Cultural Property, which consolidates, implements and strengthens many instruments, notably universalizing the responsibility to observe due diligence in trading and retaining records of transactions. Following Germany’s model, the Council of Europe’s 2017 Convention on Offences relating to Cultural Property, which is open to signature by any state, closes many common loopholes − for example, by criminalizing the import, acquisition and/or marketing of looted, stolen and/or illegally exported cultural objects. Since it is a lamented fact that cultural property offenders remain in business, the convention is also significant because it enables the disqualification of cultural property convicts from trading in cultural property.

Still, many of those states that have technically “done something”, have only reaffirmed or reiterated generic existing measures. UNESCO has been forced to reiterate its appeal to states to take even minimal practical measures, such as reporting seizures of cultural objects from conflict zones, while urging parties to the 1970 Convention on the Means of Prohibiting and Preventing the Illicit Import, Export and Transfer of Ownership of Cultural Property to implement resolutions 2199 and 2253 in law.

Monuments in peril The UNESCO Courier 1965-1

Menace of the art thieves The UNESCO Courier 1965-11

The Cultural heritage: return to the homeland The UNESCO Courier 1978-7

Samuel Hardy is an Honorary Research Associate at the Institute of Archaeology, University College, London. He investigates trafficking of antiquities in conflicts and crises, particularly by and for terrorists, armed groups and repressive regimes.