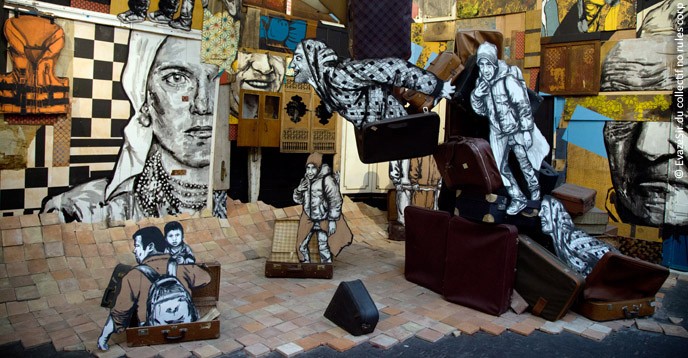 Tribulations, a pop-up installation at the Réserve Malakoff (France) by graffiti and stencil artist Sir, and painter and “poster-slasher” Evazé-Nam, questions notions of migration and borders.

We are seeing a crisis today in our idea of humanity, and philosophy can and must help us to think it through. A crisis in our idea of humanity: what do we mean by this? In the French newspaper, Le Monde, dated 30 April 2016, Nicolas Hulot – who was not yet Environment minister (a post he has held since May 2017), but head of an environmental foundation – asked this question: “Concerning migrants, where has our humanity gone?”

I consider the way in which the question is asked to be crucial, because it shows that what is revealed by the “migrant crisis” we are experiencing – unmatched since the Second World War, they say – is our own isolationism, which is today calling into question the regulatory and ethical idea of humanity.

We must think together about the migrant, a figure that highlights human distress, and the rise of what has been called populism. I prefer to use the term ethno-nationalism or tribalism, because I consider the accepted term of populism inadequate to describe what we are experiencing today.

The best symbol today for this encounter between the migrant and the ethno-nationalist is the ship chartered by young Europeans of the far-right movement, Génération Identitaire (Generation Identity). They use the ship to intercept migrants’ boats, and non-governmental  organization (NGO) ships helping migrants, in the Mediterranean − one wonders if they intend to sink them. Another image is that of the fishermen of Tunisia, opposed to the refuelling of what they consider a “racist ship” in the country’s ports.

The ethno-nationalist movements have brought to power − here and there, as we know − parties and personalities that have turned migrants into bogeymen. They have urged their constituents to rally against migrants, by forming a national front. They came close to making their ideology dominant in the Netherlands, a country that history – the history of philosophy, in particular – considers the very homeland of tolerance and the idea of humanity.

The primitive nature of the tribal instinct

Asking ourselves what gives tribalism its power requires an analysis to which philosophy − Henri Bergson (1859 to 1941) in particular − sheds the most invaluable light. It teaches us that the radical refusal to hear Hulot’s question originates in the negation of the very idea of a “humanity in general”, on which the obligation of hospitality can be based.

Is there no humanity in general? It exists, for what Bergson calls the “soul that opens” or “the open soul”, the one at the heart of his thought in The Two Sources of Morality and Religion (Paris, 1932).

In this work, the French philosopher explains that the feeling of belonging to a tribe is an instinct within us. And because it is an instinct, there is no need to question its origin or its nature, but only to recognize that it exists and that it is inscribed primitively in our nature.

This, then, is the motive on which tribal policy and the rallying call for ethno-nationalism is based. It is therefore understandable that when this policy is given the appearance of common sense − and presents itself as immediately evident versus the complexities of what it condemns as the “political correctness” of openness to others − it is making the primitive nature of the tribal instinct its primary truth. What exists for me is the circle of closeness constituted by the community of those who resemble me, who have the same colour of skin or the same religion, and so on. It has therefore been proposed to sort asylum- seekers according to their religion!

If one wishes, then, to evoke an abstraction such as that of a humanity, it can only be a zoological totalization, a grouping obtained only by the addition of ultimately heterogeneous humanities. One cannot simply arrive at the idea of humanity starting from affiliations and gradually enlarging the territorial inscriptions. In short, one cannot stretch the tribal instinct into an instinct of the human. 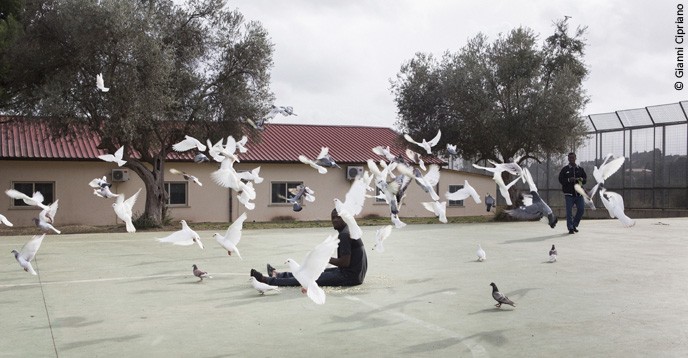 An asylum seeker feeds doves and pigeons in the courtyard of the Pian del Lago CARA (Accommodation Centre for Asylum Seekers) in Caltanissetta, Italy, 2014.

It is therefore necessary to be able to emerge from instinct, in order to find oneself, at once in touch with humanity, in oneself and in others. Then the question is this: how is it possible to open the soul beyond the tribe if it is originally established that we “naturally and directly love our parents and our fellow-countrymen, whereas love of mankind is indirect and acquired”, to quote Bergson? Where can we tap into a force that does not have the immediacy of an instinct? In other words, how is it possible to acquire something that goes against nature’s plan to enlist us in the community our “tribe” has built, with its own morality and its opposition to other tribes? This is possible because it is also in our nature, explains Bergson, to be able to “cheat” this same nature and to extend, through intelligence, “social solidarity into human fraternity”.

We thus acquire the meaning of this human fraternity through, on the one hand, religion (and it must be remembered here that one of the etymologies of this word gives it the meaning of that which connects) and, on the other, intelligence taking the form of philosophical reason. Thus, to open us up beyond instinct, there is religion and its call to love humanity “through God, in God”, and reason, “by which we all commune with one another”, and through which “the philosophers bring us to see mankind and thus show us the eminent dignity of the human person, the right of all to respect.” This love of humanity is not primitive like instinct. It is nonetheless primary. We experience it through charitable action or philosophical meaning: in one case as in the other, Bergson tells us, we arrive there in one leap, and not in stages that would go from the family to the nation, and so on.

"The open soul" is precisely the principle of this leap. It counters what one might call the stunted, closed soul, for which to love is to love against; which, to the idea of humanity, replies that its main concern is itself and what touches it most closely. And this is already a great deal, more than enough to deal with − it cannot take on all the world’s troubles.

Versus this stunted soul and its false facts, I recognize in myself an open soul that makes humanity immediately present to me – I can touch it – and allows me to be the neighbour of someone who is not close. As Bergson writes, I also recognize by this very fact that we have always to become human.  In other words, we have to grow this open soul within us continually, and to found upon it a response to the migrant crisis, that is comprised of humanity and hospitality.

Millions on the move: the refugee: a staggering world problem, The UNESCO Courier 1956-1

Immigrants on the borderline, The UNESCO Courier 1998-11

A philosopher and historian of mathematical logic, Souleymane Bachir Diagne (Senegal) is a professor at Columbia University in New York. He has written numerous books on the history of logic and philosophy, Islam and African societies and cultures. In 2011, he was awarded the Edouard Glissant Prize in recognition of his work. 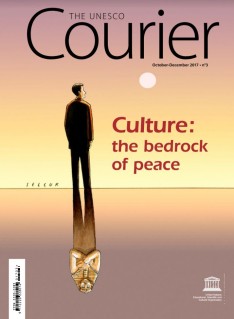