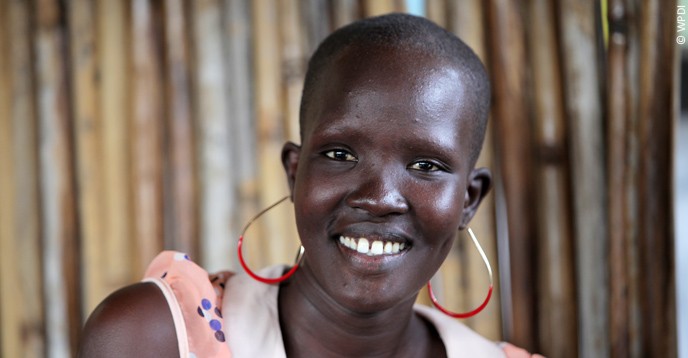 Magdalena Nandege, a young peacemaker from the Whitaker Peace and Development Initiative (WPDI) in South Sudan.

My name is Magdalena Nandege. I am 23 years old and from South Sudan. I come from Homiri, a village in Budi county. It has a population of about 150,000 people, most of them agro-pastoralists − like my mother, who is a farmer. The county has two secondary schools and eleven primary schools, none  of which have access to electricity. Only fifteen per cent of the population is literate.

I am currently training to become a midwife at the Health Science Institute of Torit, the capital city of Imotong state. We are now twenty-four students, down from an original group of thirty-seven – some students stopped coming because of the lack of security, poverty and inadequate transportation. I chose this career because I believe it is important to take care of women.

Women are the most vulnerable people in the world because they carry life. This is something I have experienced personally. In 2014, I was in labour, and left unattended, as nurses and midwives struck work to reclaim unpaid salaries. Later I was assisted by midwives working with World Health Organization (WHO). I knew then that women in South Sudan needed help to reduce maternal mortality.

This belief also led me to enroll in the Youth Peacemaker Network (YPN) of the Whitaker Peace and Development Initiative (WPDI). I joined the YPN in 2014 after hearing about it from the Eastern Equatoria Youth Union, of which I was secretary for gender and social welfare.

Through this programme, I have acquired skills to promote peace within myself and the youth in our community – through conflict management, mediation, Information and Communications Technology (ICT), meditation and entrepreneurship. The training aims to reduce violence and promote peace and development. Upon completing the course of 250 hours, I was certified by WPDI as a Trainer of Trainees (ToT), to train local young people and develop activities in remote communities. These activities consist of the facilitation of peace processes and the development of community businesses, providing services to communities and jobs to young people.

The Eastern Equatoria programme gathers eighteen ToTs and 156 youth, between the ages of 16 and 35, in payams (local communities). They can read and write, which is important, because the programme involves interaction using social media platforms. This way, we can help each other when dealing with conflicts and in the management of our respective small businesses. 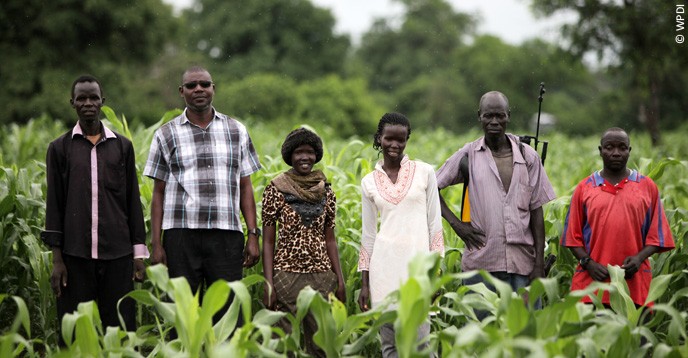 Magdalena Nandege with a group of young people working on a farming project to support their communities.

The programme has also helped me acquire confidence by using my artistic talent for a just cause. Drama and stories are very important to convey messages. As a peacemaker, I often train people or engage in community dialogues. I have noticed that when problems are really hard,  it is easier to use art, to use words that people understand, because people are able to differentiate between good and wrong through art.

Recently, I have made a short movie on gender-based violence, Magda and Boniface – Forced Marriages, with a group of friends and colleagues from YPN. We used a tablet provided by WPDI to make the film because we could not afford to buy a camera. A fictionalized version of situations that take place in our communities, the film was shot in English, and also in Toposa, Juba Arabic, and Arabic – everyone used their own language.

Many of the people in the movie were not professional actors. Young people and community leaders came together to solve the issue of early forced marriage. The fact that they accepted to be in the movie was, for me, one of the best moments of the whole process.

The movie tells the true story of a young adolescent, whose family wants to marry her off, and she refuses. She is allowed to make her case before a council, made up of her family and the community, and convinces them that a young woman should be able to choose her own partner and life.

The film was shared through Bluetooth with youth who had smart phones and also used by WPDI as one of its activities. We have not yet shown the film in schools but we used a projection  during a training of payam youth and their reaction was positive. The students acknowledged the need to encourage the education of girls and to discourage early forced marriage. I hope to show the film to a wider audience and to make more films like it, with more resources.

Through my studies and training with WPDI, UNESCO and UN Women, I have acquired skills in peace-building, conflict management, mediation, meditation, business skills, and the fight against gender-based violence. I have learned a lot about peace and human rights. But this needs to be translated in the languages that people speak at home − it must talk to their hearts.

I think that art can do a lot for peace in South Sudan, so much more than long speeches. It can show positive characters that people can identify with, inviting them to practise peace and sustainable development. We need more art in South Sudan so we can have more peace.

Child soldiers: a new life ahead, an interview with Forest Whitaker, The UNESCO Courier, 2011-4