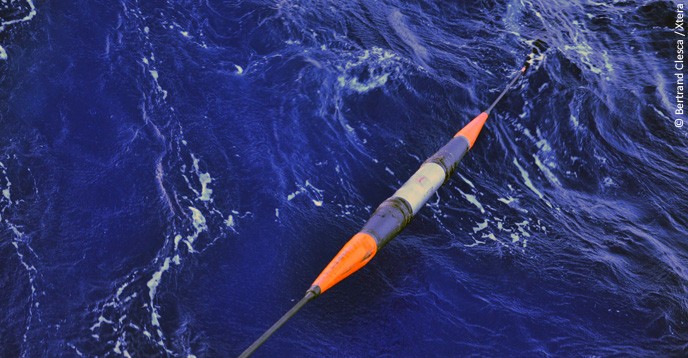 An optical repeater slips bebeath the waves as the cable it is atta- ched to is deployed along the ocean floor.

By Bruce Howe and Kate Panayotou

More than a million kilometres of submarine cables form the global telecommunications infrastructure backbone for business, finance, social media, entertainment, political expression, and science. Internationally, these cables are the physical layer of the internet. The dependability of this infrastructure is so important that entire national economies are affected when problems arise.

These same submarine cables could also provide a platform for gathering deep-ocean and seabed data for a range of environmental issues. Our oceans and climate are experiencing global changes, including warming, acidification, and sea-level rise, that affect us now and in the future.

A standard telecommunication system includes an electro-optical seabed cable with optical repeaters approximately every sixty kilometres. By adding environmental sensors to the repeaters, we could have access to a global network of real-time data for environmental threats and disaster mitigation.

An early-warning system for tsunamis could save lives and prove invaluable, particularly for developing countries, where the comprehensive coverage of all subduction zones is not viable. Since tsunami waves often arrive less than thirty minutes after offshore earthquakes, every minute counts. 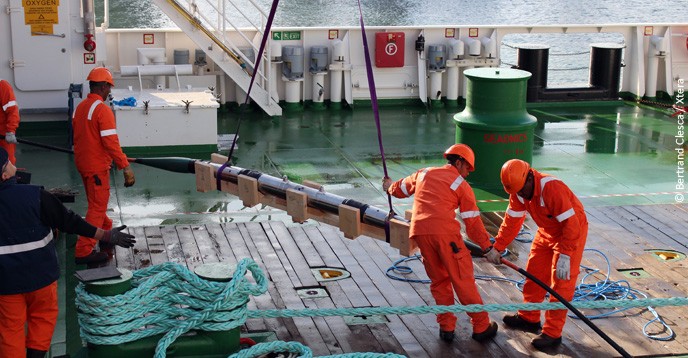 Crew members load an optical repeater (in the wooden cradle) on the deck of Pierre de Fermat, a cable ship belonging to France’s Orange Marine company.

An international effort in the truest sense, the JTF is made up of experts (many of them volunteers) from several dozen countries and 80 organizations representing science, observing system managers, industry, government agencies and sponsors.  It calls upon the private sector, governments, scientists, philanthropic foundations and the internet-using public to recognize this extraordinary need and opportunity, and to take concerted action to make this system a reality.

The installation of SMART Cables requires access to the sea-floor and the deepest ocean, which today is literally “owned” by the telecommunications private sector. The cables traverse the global ocean floor, crossing several national boundaries – throwing up a bewildering array of legal, technical and financial complications.

Therefore, unique new partnerships and collaborations must be established to enable this SMART cable vision. The engagement of the private sector, including internet companies which are newly investing in submarine cables, could directly address financial and legal issues, and the permitting process.

Through a series of meetings and workshops with academic and government scientists and the telecommunications industry, a growing consensus is being reached to assuage the hurdles facing SMART systems. Scientific and societal needs are being documented, and the legal framework under the UN Convention on the Law of the Sea, and technical feasibility have been produced.

Today, only a fraction of these telecommunications cables are being used for scientific purposes. Environmental oceanic observation systems, owned and operated by academia and government agencies already exist, but they are utilized only over short distances and used for research purposes.

The concept of a “wet demonstrator” system suitable for deployment and medium-term operation has been put forth to address the effectiveness and practicality of the SMART approach. A pilot system has been proposed in the South Pacific, linking several islands.

Technological advances have made it possible to integrate basic sensors with repeaters on submarine telecommunication cables at a small fraction of the total cost of a new cable system deployment.  The unit cost of a single sensor package is expected to be around $0.2 million, so a modest system such as the proposed pilot should be under $10 million, with an expected life of twenty-five years.

No ocean-aware underwater telecommunications system is in place today. The deep-ocean data from SMART Cables could bridge a fundamental gap in our knowledge. The time is ripe to begin a future with SMART systems.

Bruce Howe (USA) develops ocean observing sensor network infrastructure, including cable systems. He currently serves as Chair of the JTF SMART Cable initiative, and is a professor at the University of Hawaii, Department of Ocean and Resources Engineering.

Kate Panayotou (Australia) is a principal environmental scientist with seventeen years’ experience in the coastal, marine, estuarine, environmental and stakeholder engagement sectors. She has worked in the submarine cable industry for over a decade.