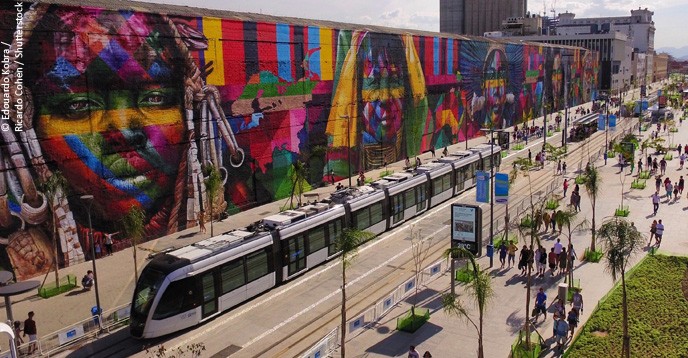 “We Are All One”, the world’s largest mural (3,000 square metres) painted by Brazilian street artist Eduardo Kobra to mark the 2016 Rio Olympics. Five massive faces represent the five continents.

“Belém is the first port of access to the Amazon, giving it an extraordinary cultural diversity. Culture helps communities to express their local identities and encourages dialogue. It stimulates intense interaction between socio-cultural groups and the local authorities, especially as Brazil is going through a dire ethical and economic crisis.”

“Culture can be a mechanism for peace, specifically in the US at a time when our politics are very divisive. I am in a city of non-partisanship where we are all on the same level. We talk about city issues rather than partisan political issues.

Culture is our foundation, and we all resonate with it. We are known for our quilt-making, and have the National Quilt Museum. About fifteen years ago, we had a decrepit neighbourhood that needed to be revitalized. The city offered houses to artists for $1, which they had to renovate, and include an art studio. This attracted about fifty artists, providing a new creative environment that we didn’t have before.”

“Artists have been working a lot with the people of Saint-Étienne. Jordan Seiler from the United States, for example, is looking at urban advertising with residents. He has invented the “NO AD” app, which displays a work of art on a screen when you put your smartphone or tablet up against an advertising display. Getting everyone − from the mayor to a child from a working-class neighbourhood − to work on the same art project, is an ideal way to nurture ideas of equality.”

“I think the most important thing to have culturally, in a country like ours, is public awareness − when people know themselves, and recognize the rights of others. Our city is working on building public awareness, transparency and accountability.”

“New Zealand’s first inhabitants, the Maōri, lost their land to colonizers in the nineteenth century. We are now going through a healing process, where they are being compensated, and getting back their pride.

Today, my city is a refugee resettlement destination for Syrian refugees − we have taken in 200 so far. One way of using culture to achieve peace is to accept more diversity − to respect and to commemorate the cultures that make your community what it is.”