The city of Samarkand has been at the crossroads of world cultures for over two and a half millennia, and is one of the most important sites on the Silk Routes traversing Central Asia. Located in the Zerafshan River valley, in north-eastern Uzbekistan, the city enjoys the benefits of abundant natural resources and settlement in the region can be traced back to 1,500 BC.

Samarkand has long been a central point for trade across the region, and was a substantial city renowned for its craft production, with a citadel and strong fortifications, several centuries before it was conquered by Alexander in 329 BC. From the late antique and early medieval period, the city and the surrounding area were inhabited by the Sogdians, a people of Iranian origins renowned for their skill at trading. As early as Han times (206 BC-220 AD), when the Chinese first committed to writing their impressions of Inner Asia, Sogdian merchants are recorded in the Chinese descriptions of the region. Sogdian colonies were established all along the trade routes and Sogdian letters have been discovered from 313-314 AD, providing evidence about a network of merchants from Samarkand, reaching various places as far as China, in order to trade precious metals, spices and cloth. Sogdian inscriptions on rocks in northern Pakistan testify to their activity on the routes south into India. Later on, in the 6th century AD, Sogdian merchants seem to have travelled west and developed new routes for trade with Byzantium.

The ancient city of Samarkand seems to have been a crucible of cultures and religions. An archaeological reserve in the north-east of Samarkand, known as Afrasiab, the site of the ancient city, contains numerous indications of a diverse medieval society.  Excavations have revealed brilliant murals, whose fragments seem to illustrate a number of exotic scenes: a wedding procession, ambassadors bearing gifts, a diplomatic ceremony, and scenes from the royal hunt. Another shows a Chinese princess being conveyed across a river in a boat.

There is considerable evidence in the paintings, as well as in other archaeological material and written sources indicating that several religions were practiced in the ancient city, in particular, Zoroastrianism and Christianity. There were, additionally, two Buddhist temples, and wall paintings showing influences of Hinduism and Manichaeism, as well as Central Asian deities.

After the Muslim conquest in the early eighth century, the last of the Sogdian rulers of the many small states in the Zerafshan Valley fled. By the 9th century, the cities of Transoxiana became major centres of Muslim learning under the Samanids, who were of Iranian origin. Unfortunately, however, little remains of the architecture from this period in the city.

Samarkand was invaded and destroyed by Genghis Khan and his Mongol armies when they conquered the area in 1220, and much of its historic architecture was reduced to ruins, with only fragments of the walls remaining. The Persian chronicler, Juvaini (1226–1283), wrote with dismay about the destruction wrought in Samarkand, although by the early 1330s the famous Arab traveller Ibn Battuta visited Samarkand and described it as "one of the greatest and finest of cities, and most perfect of them in beauty".

However, the real rebuilding of Samarkand and its resurrection as a great city had to await the emergence of Tamerlane, the founder of the Timurid dynasty, who decided to make it his capital city in the 1370s. One of his first moves was to build a central high-street and line it with shops, thus encouraging trade and the development of a merchant economy. The city’s development continued under Tamerlane's grandson Ulughbeg, who ruled the city for much of the first half of the fifteenth century until his assassination in 1449, and developed Samarkand as something of a scientific centre, in particular constructing an important observatory in 1420.

Perhaps one of the most interesting and important Timurid sites in Samarkand is the Shah-i Zinde, a mausoleum complex located just northeast of the city. Most of the surviving buildings date from the mid-14th to mid-16th centuries. It is significant first and foremost because it contains the most important Muslim shrine in the region. The tomb complex is comprised of some two dozen mausoleums and a couple of small mosques. Numerous inscriptions, some dated, and the extensive preservation of the ceramic tiles on the buildings provide a unique overview of the architectural decoration for a very significant century in the history of Islamic art in Central Asia.

Another mosque, the Bibi Khanum Mosque, built in Samarkand between 1399 and 1404, commemorates Tamerlane's wife. A contemporary chronicler relates that Tamerlane brought in architects from Iran and India for the project and used ninety-five elephants to haul construction material. As had become typical in Timurid buildings, there was abundant use of different kinds of tile work over much of the exterior surface.

Some of the most innovative and impressive features of Timurid buildings cannot be seen from the outside. The domes of buildings tended to be double or even triple, with ingenious devices for connecting the "shells" and providing them with stability. The vaults supporting the domes from below were not only structurally complex but dazzlingly decorated with traditional Islamic muqarnas.

The city was conquered by the Shaybanids in 1500, an Uzbek tribe led by Muḥammad Shaybānī Khan, who incorporated Samarkand into their recently acquired khanate of Bukhara. Several important buildings date from this period, notably the Sher-Dor Madrasah, built between 1619 and 1636, and the Tilya-Kori Madrasah, constructed just afterwards from 1646 to 1660. Nonetheless, with Bukhara as the capital, Samarkand declined and was uninhabited by the late 18th century, only reviving with the introduction of the railway in 1888, which allowed the city to regain its ancient role as a trading centre at the crossroads of routes to east and west. Even today, silk weaving and the production and trade of textiles remain one of the city’s major industries. 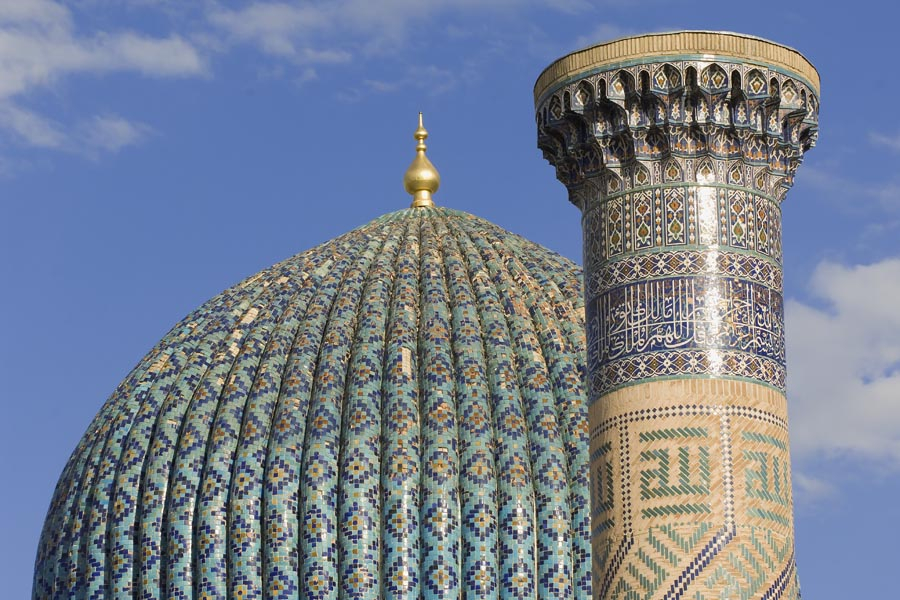 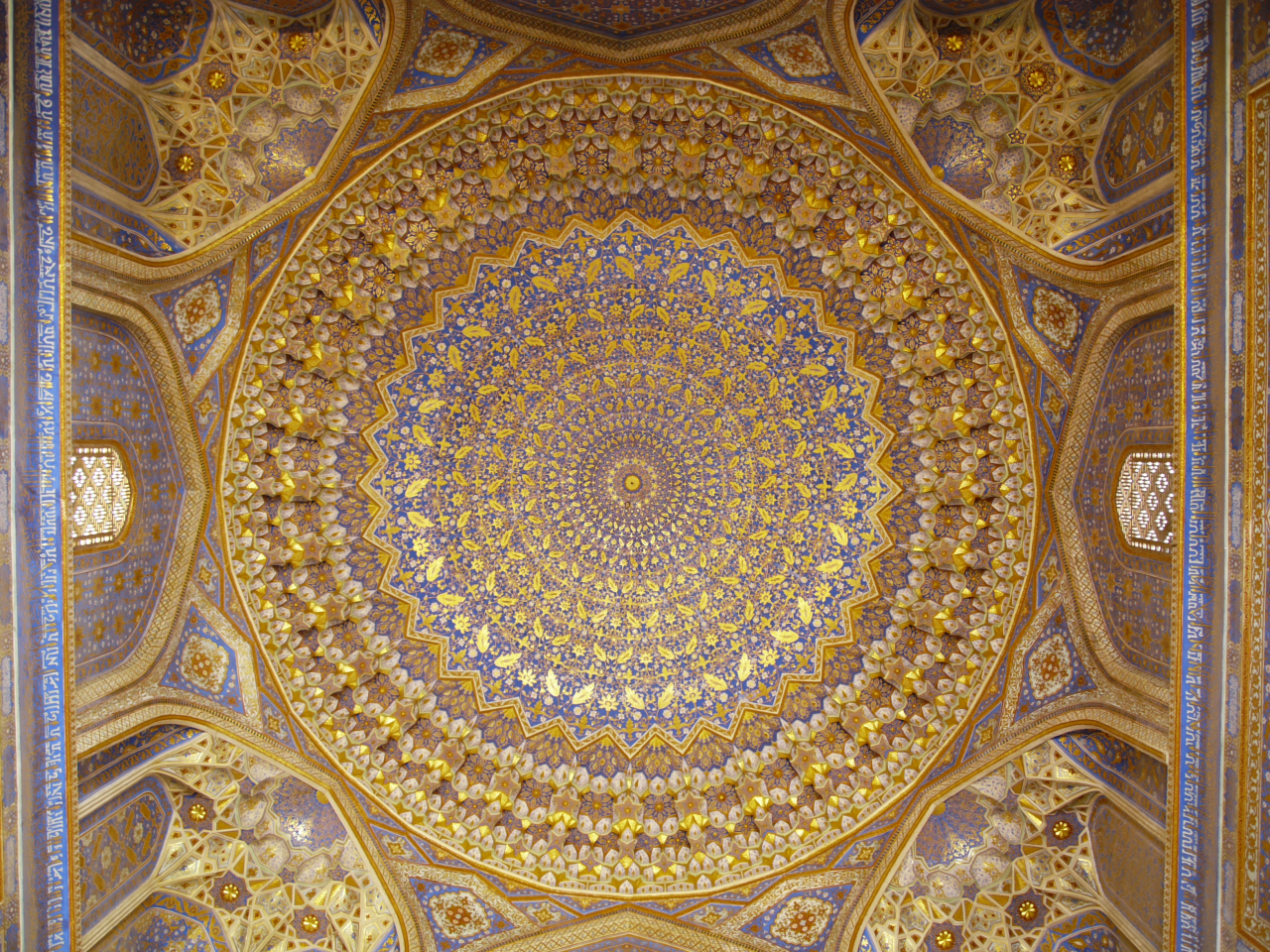 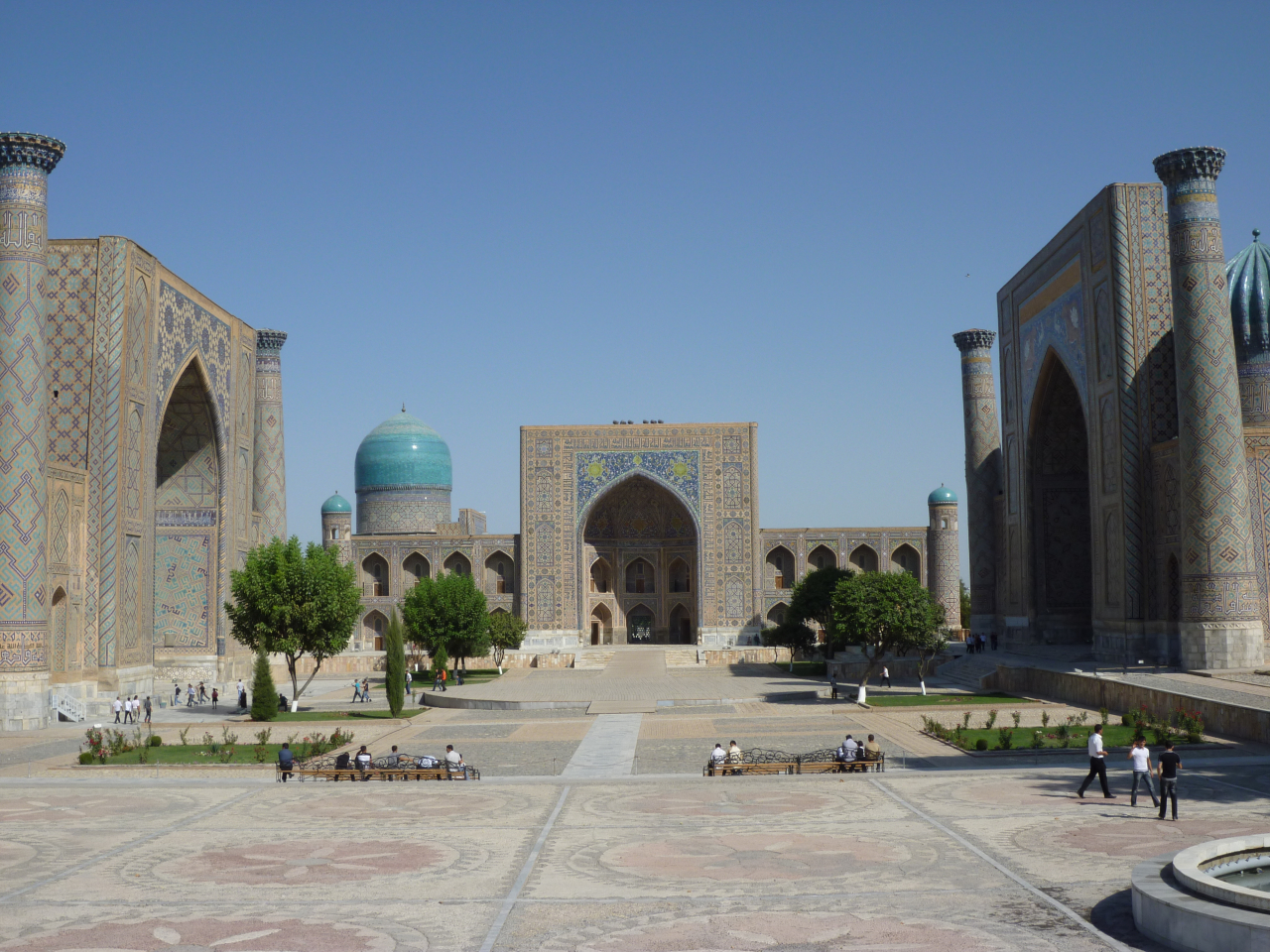 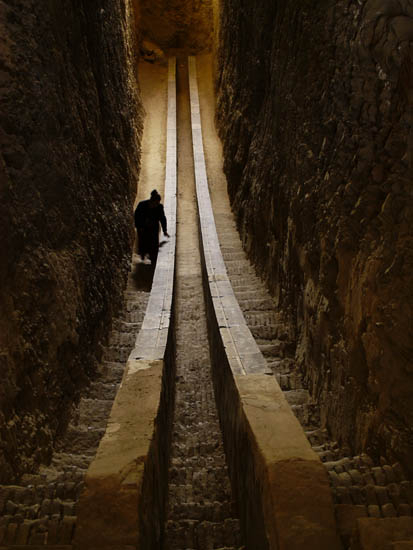 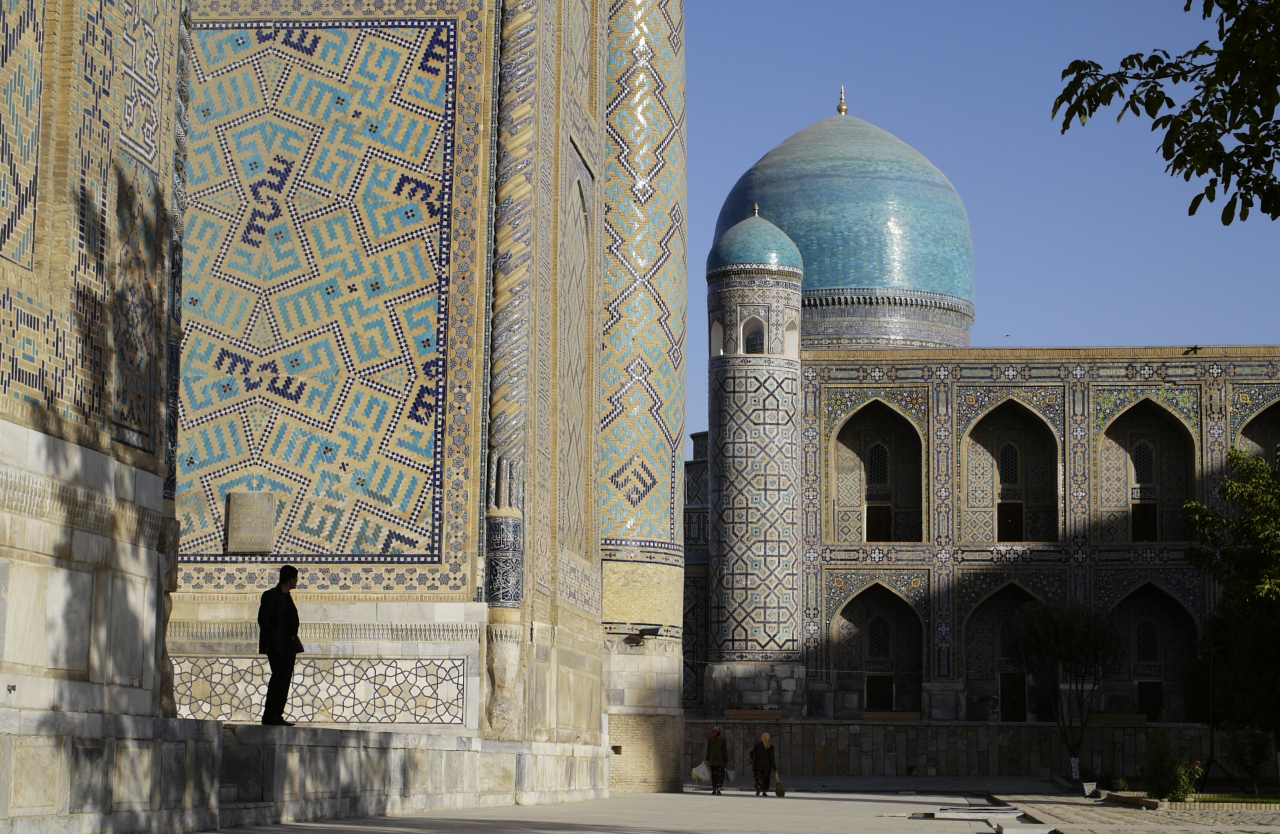