The vast trade networks of the Silk Roads carried more than just merchandise and precious commodities. In fact, the constant movement and mixing of populations brought about the widespread transmission of knowledge, ideas, cultures and beliefs, which had a profound impact on the history and civilizations of the Eurasian peoples. Travellers along the Silk Roads were attracted not only by trade but also by the intellectual and cultural exchange taking place in cities along the Silk Roads, many of which developed into hubs of culture and learning. Science, arts and literature, as well as crafts and technologies were thus shared and disseminated into societies along the lengths of these routes, and in this way, languages, religions, and cultures developed and influenced one another.

Silk is a textile of ancient Chinese origin woven from the protein fibre produced by the silkworm as it makes its cocoon. The cultivation of silkworms for the process of making silk, known as sericulture, was, according to Chinese tradition, developed sometime around the year 2,700 BCE. Regarded as an extremely high value product, silk was reserved for the exclusive usage of the Chinese imperial court for the making of cloths, drapes, banners, and other items of prestige. Its production technique was a fiercely guarded secret within China for some 3,000 years, with imperial decrees sentencing to death anyone who revealed to a foreigner the process of its production. Tombs in Hubei province dating from the 4th and 3rd centuries BCE contain the first complete silk garments as well as outstanding examples of silk work, including brocade, gauze and embroidered silk.

At some point during the 1st century BCE, silk was introduced to the Roman Empire, where it was considered an exotic luxury that became extremely popular, with imperial edicts being issued to control prices. Silks popularity continued throughout the Middle Ages, with detailed Byzantine regulations for the manufacture of silk clothes, illustrating its importance as a quintessentially royal fabric and an important source of revenue for the crown. Additionally, the needs of the Byzantine Church for silk garments and hangings were substantial. This luxury item was thus one of the early impetuses for the development of trading routes from Europe to the Far East.

Knowledge about silk production was very valuable and, despite the efforts of the Chinese emperor to keep it a closely guarded secret, it did eventually spread beyond China, first to India and Japan, then to the Persian Empire and finally to the west in the 6th century CE. This was described by the historian Procopius, writing in the 6th century:

"About the same time [circa. 550 CE] there came from India certain monks; and when they had satisfied Emperor Justinian Augustus that the Romans should no longer buy silk from the Persians, they promised the emperor in an interview that they would provide the materials for making silk so that never should the Romans seek business of this kind from their enemy the Persians, or from any other people whatsoever. They said that they were formerly in Serinda, which they call the region frequented by the people of the Indies, and there they learned perfectly the art of making silk. Moreover, to the emperor who plied them with many questions as to whether he might have the secret, the monks replied that certain worms were manufacturers of silk, nature itself forcing them to keep always at work; the worms could certainly not be brought here alive, but they could be grown easily and without difficulty; the eggs of single hatchings are innumerable; as soon as they are laid men cover them with dung and keep them warm for as long as it is necessary so that they produce insects. When they had announced these tidings, led on by liberal promises of the emperor to prove the fact, they returned to India. When they had brought the eggs to Byzantium, the method having been learned, as I have said, they changed them by metamorphosis into worms which feed on the leaves of mulberry. Thus began the art of making silk from that time on in the Roman Empire."

Beyond Silk: a diversity of routes and cargos

These routes developed over time according to shifting geopolitical contexts throughout history. For example, merchants from the Roman Empire would try to avoid crossing the territory of the Parthians, Rome’s enemies, and therefore took routes to the north instead, across the Caucasus region and over the Caspian Sea. Similarly, whilst extensive trade took place over the network of rivers that crossed the Central Asian steppes in the early Middle Ages, their water levels rose and fell, and sometimes rivers dried up altogether, and trade routes shifted accordingly.

The history of maritime routes can be traced back thousands of years, to links between the Arabian Peninsula, Mesopotamia and the Indus Valley Civilization. The early Middle Ages saw an expansion of this network, as sailors from the Arabian Peninsula forged new trading routes across the Arabian Sea and into the Indian Ocean. Indeed, maritime trading links were established between Arabia and China from as early as the 8th century CE. Technological advances in the science of navigation, in astronomy, and also in the techniques of ship building, combined to make long-distance sea travel increasingly practical.  Lively coastal cities grew up around the most frequently visited ports along these routes, such as Zanzibar, Alexandria, Muscat, and Goa, and these cities became wealthy centres for the exchange of goods, ideas, languages and beliefs, with large markets and continually changing populations of merchants and sailors.

The map above illustrates the great variety of routes that were available to merchants transporting a wide range of goods and travelling from different parts of the world, by both land and sea. Most often, individual merchant caravans would cover specific sections of the routes, pausing to rest and replenish supplies, or stopping altogether and selling on their cargos at points throughout the length of the roads, leading to the growth of lively trading cities and ports. The Silk Roads were dynamic and porous; goods were traded with local populations throughout, and local products were added into merchants’ cargos. This process enriched not only the merchants’ material wealth and the variety of their cargos, but also allowed for exchanges of culture, language and ideas to take place along the Silk Roads.

Despite the Silk Roads history as routes of trade, the man who is often credited with founding them by opening up the first route from China to the West in the 2nd century BC, General Zhang Qian, was actually sent on a diplomatic mission rather than one motivated by trading Sent to the West in 139 BCE by the Han Emperor Wudi to ensure alliances against Chinas enemies the Xingnu, Zhang Qian was ultimately captured and imprisoned by them. Thirteen years later he escaped and made his way back to China. Pleased with the wealth of detail and accuracy of his reports, the emperor then sent Zhang Qian on another mission in 119 BCE to visit several neighbouring peoples, establishing early routes from China to Central Asia.

These routes were also fundamental in the dissemination of religions throughout Eurasia. Buddhism is one example of a religion that travelled the Silk Roads, with Buddhist art and shrines being found as far apart as Bamiyan in Afghanistan, Mount Wutai in China, and Borobudur in Indonesia. Christianity, Islam, Hinduism, Zoroastrianism and Manicheism spread in the same way, as travellers absorbed the cultures they encountered and then carried them back to their homelands with them. Thus, for example, Hinduism and subsequently Islam were introduced into Indonesia and Malaysia by Silk Roads merchants travelling the maritime trade routes from the Indian Subcontinent and Arabian Peninsula.

As trade routes developed and became more lucrative, caravanserais became more of a necessity, and their construction intensified across Central Asia from the 10th century onwards, continuing until as late as the 19th century. This resulted in a network of caravanserais that stretched from China to the Indian subcontinent, Iranian Plateau, the Caucasus, Turkey, and as far as North Africa, Russia and Eastern Europe, many of which still stand today.

Maritime traders had different challenges to face on their lengthy journeys. The development of sailing technology, and in particular of ship-building knowledge, increased the safety of sea travel throughout the Middle Ages. Ports grew up on coasts along these maritime trading routes, providing vital opportunities for merchants not only to trade and disembark, but also to take on fresh water supplies, as one of the greatest threats to sailors in the Middle Ages was a lack of available drinking water. Pirates were another risk faced by all merchant ships along the maritime Silk Roads, as their lucrative cargos made them attractive targets.

The legacy of the Silk Roads

Today, many historic buildings and monuments still stand, marking the passage of the Silk Roads through caravanserais, ports and cities. However, the long-standing and ongoing legacy of this remarkable network is reflected in the many distinct but interconnected cultures, languages, customs and religions that have developed over millennia along these routes.  The passage of merchants and travellers of many different nationalities resulted not only in commercial exchange but in a continuous and widespread process of cultural interaction. As such, from their early, exploratory origins, the Silk Roads developed to become a driving force in the formation of diverse societies across Eurasia and far beyond. 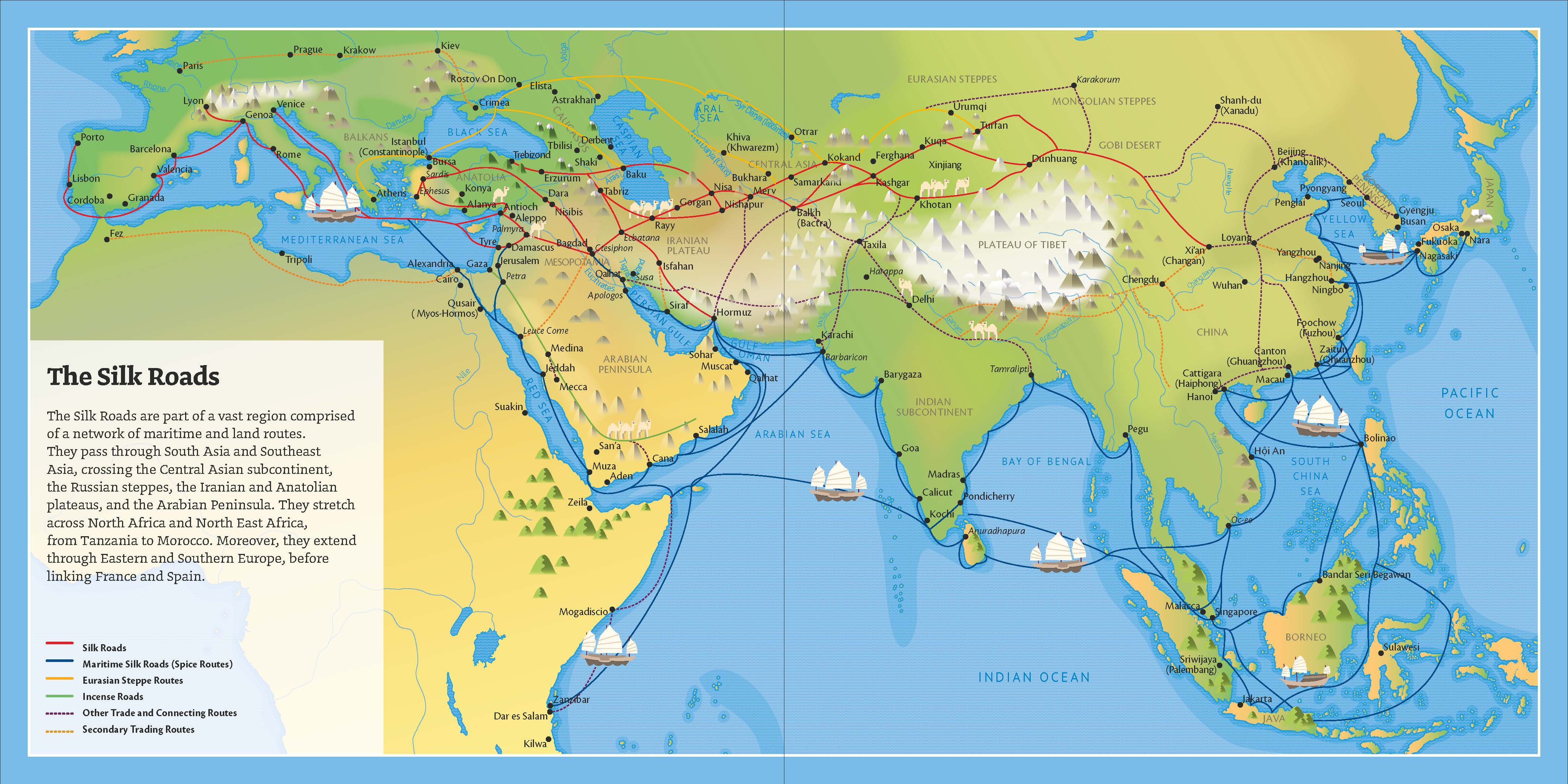 UNESCO Integral Study of the Silk Roads, Roads of Dialogue