The impressive remains of the ancient caravan city of Palmyra stand in the middle of the desolate Tadmorean Desert in Syria. All around are natural barriers: mountains to the north, west and southwest, while to the east and south are dry flatlands, with the volcanic basalt desert of the Hauran merging into Jordan. To the east, beyond the desert with its wadi and passes, runs the Euphrates River, permitting traffic by river to come in through the Persian Gulf from northwest India and beyond. The Tadmorean mountain range meant that roads either went north or south – and the southern routes came through Palmyra. As such, the city was well-served to become an important centre of trade for those merchants who chose to cross this desert rather than take the longer route around it, and as such, a hub of cultures and languages too.

The history of Palmyra is closely linked to the development of the Silk Road in this region and to the city’s strategic placement between the major powers of the early Middle Ages. A settlement called Tadmor is mentioned as early as the eighteenth century BC, and by the first century AD, Palmyra had become a base for traders crossing the desert. Conquered by the Greeks in 332 BC and then by the Romans in 64 BC, the region remained extremely multi-cultural, combining the Hellenizing influence of the West with the cultures of Central Asia, including those of the major powers of the east and rivals of the Roman Empire – namely, the Parthians and subsequently the Sassanids.

As such, Palmyra came to occupy a no-man's land criss-crossed with caravan routes. The city profited from its location, for there was a demand from Rome for the luxuries of the East — silks and spices — and Parthia, with its growing interest in Hellenistic culture, wanted the goods of the West. There was some sort of tacit understanding between the two powers, which enabled Palmyra, a neutral, semi-independent town, to become the middleman in this trade with its enormous profits.

One of the main languages of the area was Aramaic, a language related to Hebrew, and written with the same alphabet, although Greek was also spoken. The inscriptions found in the city are bilingual, in Aramaic and Greek; a few with Latin also survive but only from the later years of the city, providing first-hand information about the types of exchange and interaction that took place along this stretch of the Silk Road.

Sculptures from Palmyra also give an indication of the culture of this city, especially the clothing, which represented the two cultures, Greek and Central Asian. For the men, the Greek garments consisted of a chiton, a long, sleeveless tunic with the cloth, generally of linen, covering to the elbows, worn with a large cloak of linen or wool. Fragments of patterned cloth of linen, wool and silk have been found, as well as fragments of Chinese silk.

The other style was what generally is called Parthian. It consisted of a long-sleeved tunic, short, belted and split at the sides, and trousers that were tight at the ankles, with supple boots. Unlike the usual Greek fashion, this style is highly decorative with bands of ornamentation on the tunic and along the limbs. A cloak was worn over the tunic. The women also wore a long, belted tunic with either tight or full long sleeves with a decorative cuff, or without sleeves, like that of the men.

The flow of trade through the city supported building on a grand scale. With its temples and their grounds and civic buildings such as the public meeting place (the Agora), the Monumental Arch, Grand Colonnade and Theatre, Palmyra became the most luxurious and elegant city in Syria. Even today, enough remains to indicate the magnificent city of that time with its splendid architecture built of a local pale gold limestone. At the city's centre, the Agora (probably built in the middle of the first century) was the same as that found in all Graeco-Roman cities. The colonnade, some 1100-meters long, originally contained around 375 columns, most of which are 9.5 meters high and 0.95 meters thick, of which about half remain. There would have been shops and trading stations under the porticos on both sides.

The main burial grounds were to the southwest of the city, and these provide another glimpse at the busy, commercial life of Palmyra through the funerary inscriptions that remain. The inscriptions, usually bilingual, are on the pedestals of statues of the dead. None of these statues survive, but of the 181 honorific inscriptions that have been found some 36 relate to the caravan trade, honouring the ‘chiefs of the caravan’: synodiarch in Greek and rb shurt in Aramaic. Unfortunately there is no solid information on what goods were carried, who carried them, how the caravan was organized, and so on. Yet, some of those to whom statues were dedicated clearly were major players in the Palmyrean commercial scene and quite likely supplied the capital necessary to carry on the trade.

The inscriptions provide very incomplete evidence of Palmyra's trade routes. Amongst the surviving inscriptions, there is mention of only one caravan route, from Spasinou Charax, in the Persian Gulf up the Euphrates through Vologesias and then overland to Palmyra. There are two cases of ships owned by a Palmyrene that arrived from Scythia, referring to the Indus estuary area in northwest India. They thus appear to have channelled the trade from India and China through the ports in India and up the Persian Gulf. There is some question about the role of the desert nomads in this trade - they may well have profited from this, supplying camels and receiving payments. But there is also mention in several inscriptions of attacks on merchants being averted by armed forces sent from Palmyra.

A breakdown of the delicate balance between the Roman Empire and its eastern neighbours, the Parthians and then the Sassanids, came to threaten Palmyra's role and affluence. The rise of the Sassanids created particular difficulties for the Romans, who were beset on all sides and weakened internally by pretenders to the throne. By the 3rd century AD, Palmyra was suffering from the effects of this political instability, epitomised in 260 when the Sassanian emperor, Shapur I, captured the Roman emperor Valerian in 260, and the city declined into a provincial market town for the nearby nomads. The caravan routes moved to the north, through Asia Minor and on to Constantinople, and Palmyra came to be deserted, until its striking ruins were rediscovered in the seventeenth century. 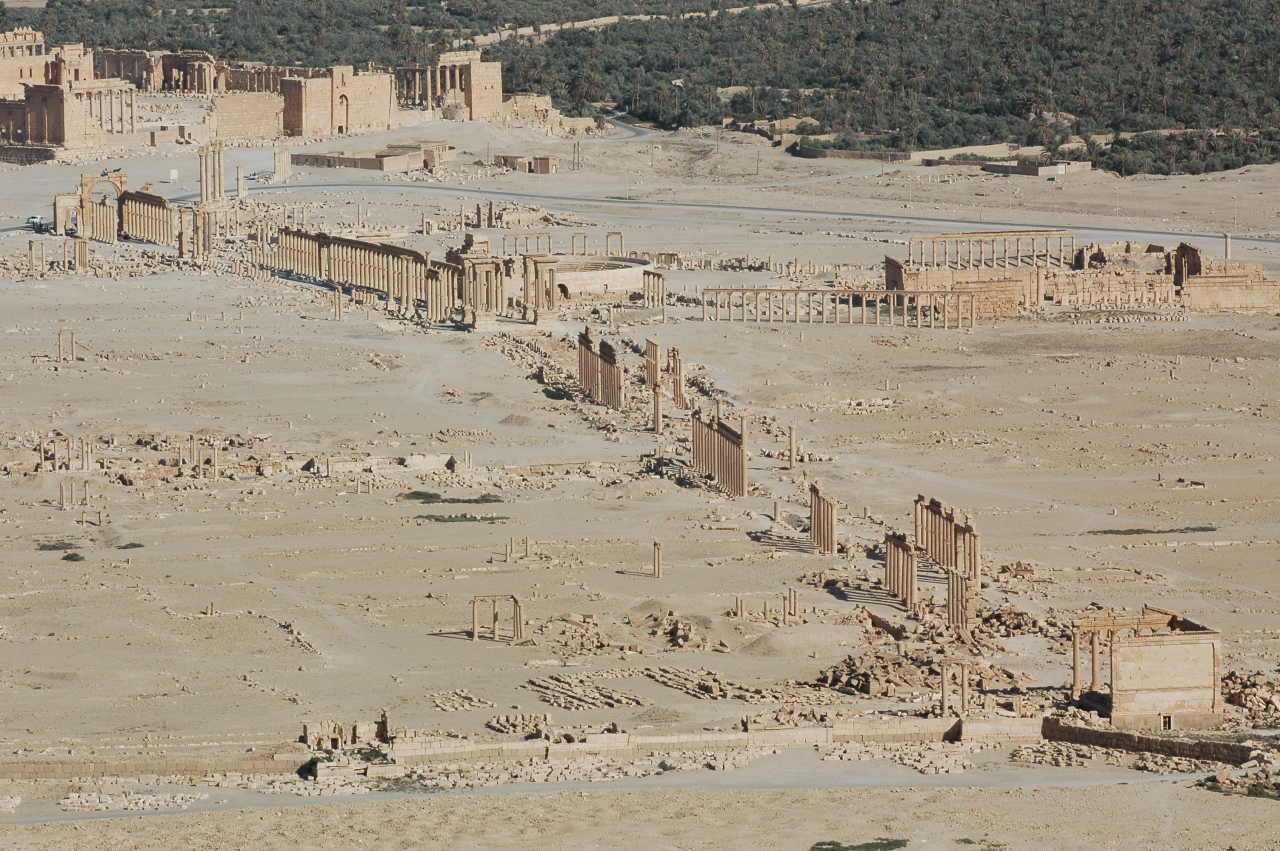 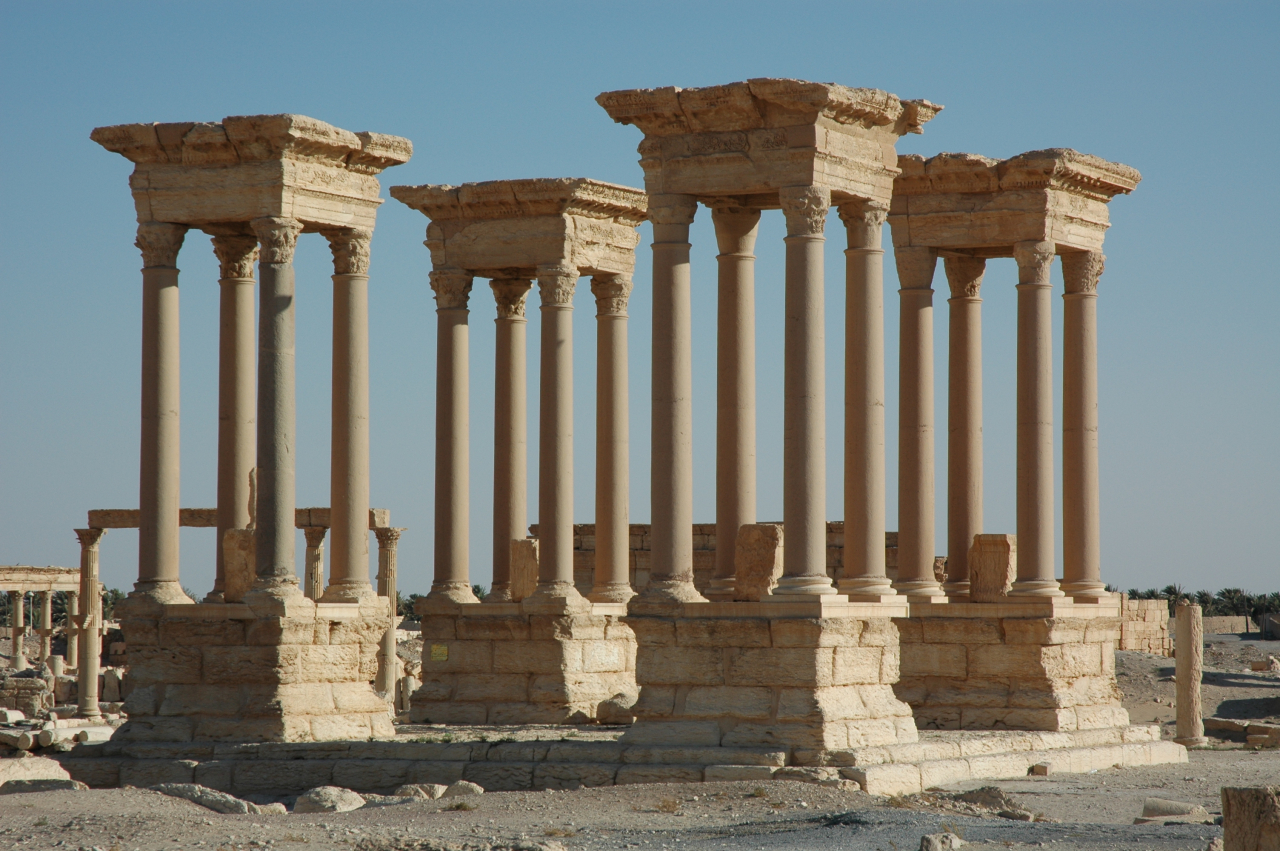 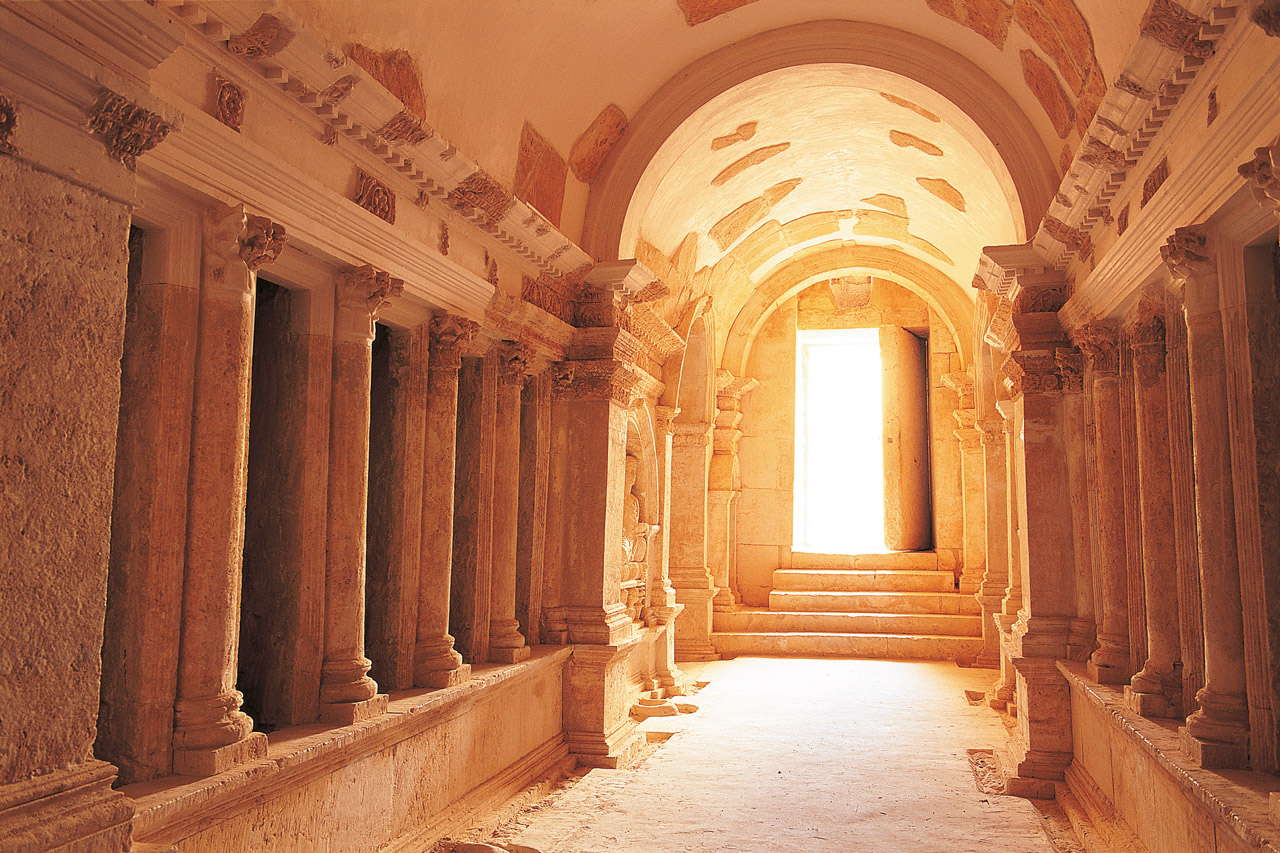 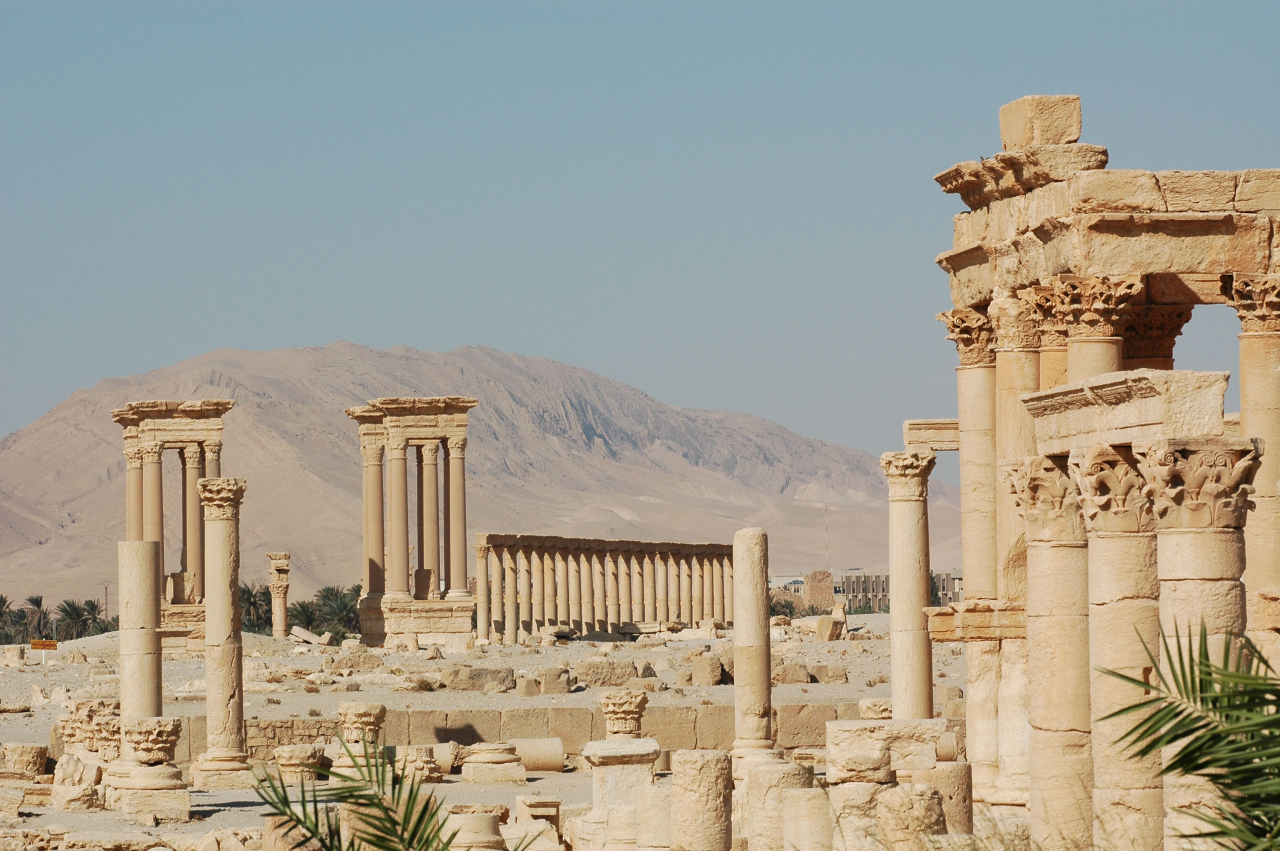 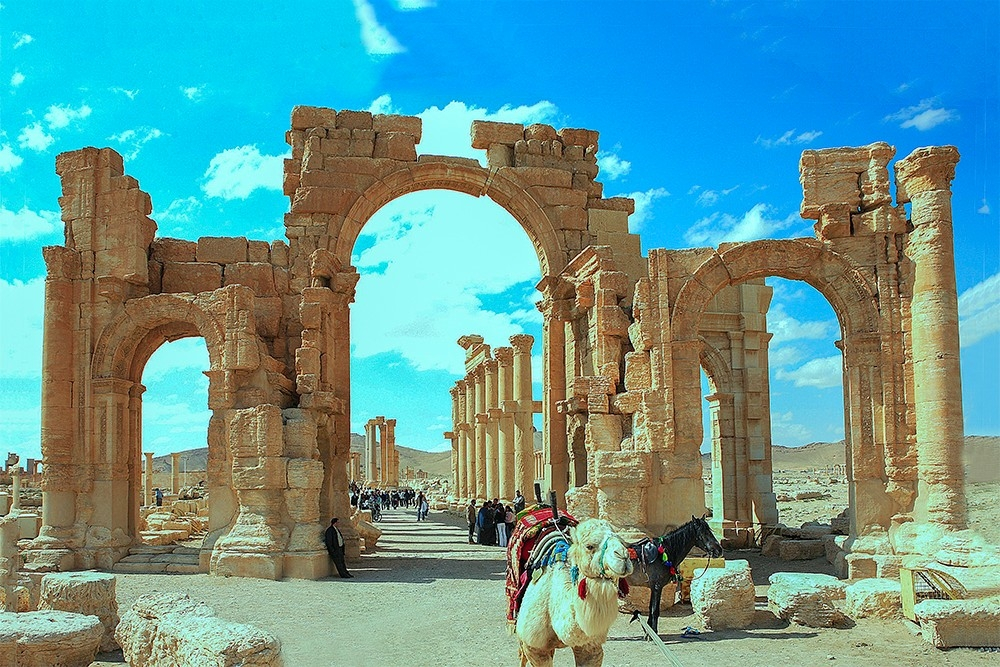