The city of Nara lies in southern Honshu, Japan, on the edge of the Nara Basin, and was the ancient capital of Japan in the Nara period, from 710 until 794 AD, when it was known by the name of Heijo-kyo. Linked to the maritime Silk Roads through the city of Osaka, which lies on the coast just 40 km (25 miles) to the west, Nara developed as a cultural hub where Japanese, Chinese and Korean influences came together, as well as a religious centre of significance both for Buddhists and Shintoists. Nara's ancient monuments and architecture, as well as a collection of 8th century goods in the Shoso repository, all bear witness to the cultural diversity and vibrancy that characterised this city at the far east of the Silk Roads.

Nara had a role as a Buddhist centre before it rose to political and social prominence in the 8th century. Buddhism was one of the many religions that spread along the lengths of the Silk Roads, and was often transmitted by pilgrims, monks and indeed merchants themselves. A number of Buddhist monuments and temples were constructed in Nara from around the year 600 AD, commissioned by the prince Shotoku (imperial regent from 593 until 622). The Horyu Temple, to the south-west of the city, is the oldest extant temple compound in Japan, consisting of some 45 buildings, and was built between 601 and 607 (although fire damage has caused parts of it to be subsequently rebuilt). It is the centre of the Shotoku Buddhist sect, and the original buildings in the compound are some of the oldest wooden structures in the world, including the five-storey pagoda and the main hall (or kondo).

In 710 AD, Nara became the imperial capital of Japan, and would remain at the heart of the Japanese empire until the end of the Nara period in 794. Its development across the 8th century reflects the variety of influences that contributed to shaping the city's culture and even its topographical design, as new ideas arrived along the paths of the maritime Silk Roads. Originally known as Heijo-Kyo in 710, the city was enlarged according to Chinese methods of urban planning, as displayed in the construction of historic Chang'an (today known as Xi'an). Nara was likewise planned in the form of an orthogonal grid, consisting of Buddhist temples, Shinto shrines, public buildings, and an imperial palace for the emperor.

The city also developed as a religious centre from which Buddhism was promoted as the imperial religion of Japan, and the Emperor Shomu (who reigned between 724 and 749) ordered temples and other religious buildings to be constructed on a wide scale. Many of the remarkable Buddhist temples that distinguish Nara today date from this period, and are crucial not only in our understanding of Japanese temple architecture, but also in illustrating the growth of Buddhism throughout Japan, as well as the external influences that played a part in Nara's development. The city's main temple complex, the Todai (or Great Eastern) Temple, built between 745 and 752, was the largest and most powerful monastery in the Nara period and the centre of the Kegon Buddhist sect. It contains a monumental bronze statue of the seated Great Buddha (the Daibutsu) that reaches some 15 metres high within the Great Buddha Hall, one of the largest wooden buildings in the world.

The influence of Chinese Buddhism played an important role in shaping the emerging Buddhist culture of Nara, as is reflected, for example, in the Toshodai Temple, built in 759 by the Chinese High Priest Jian Zhen and designed specifically for religious scholars. Other Buddhist temples were moved to Nara when it became the imperial capital, such as the Kofuku Temple, rebuilt there in 710, and the Gango Temple, rebuilt in 718. Nara is also an important centre for Shintoists, and is home to the Kasuga Great Shrine, which was founded in 768 at the foot of two holy mountains, Kasugayama and Mikasayama. As such, pilgrims from both the Buddhist and Shinto traditions travelled to Nara, and many would have journeyed via maritime trade routes across the East China Sea and the Sea of Japan.

In addition to the circulation of religious cultures, Nara's connection with the Silk Roads also shaped the goods produced in and around the city.  One of the surviving structures of the main Todai Temple in Nara is the Shoso Repository, a timber building which houses more than 600 of the personal treasures of the Emperor Shomu (who died in 756). These include Buddhist devotional objects, jewellery, masks, furniture, musical instruments, paintings, sculpture, brocade, embroidery, batik, stencil work, tie-dyed cloths, metalwork, glassware, pottery, maps, samples of calligraphy, and cloisonné objects. The goods in the collection reflect a clear influence from Chinese culture, and many display styles and decorations that were typical of the Chinese Tang Dynasty (618-907 AD). Although the majority of these objects were most likely to have been produced locally, their design highlights the close links between Chinese Tang culture and the society of Nara in the mid-8th century, and illustrates the ongoing exchange of cultures and ideas along the maritime Silk Roads.

Crafts and skills were also passed on as merchants and travellers interacted with each other, and techniques such as the cloisonné decorations found in the Shoso Repository, which were practised across Asia over the course of the Middle Ages, bear witness to this active process of exchange. Other wares have been added to the repository since the mid-8th century, and it now contains over 9,000 objects and works of art, representing the cultural diversity and vibrancy of early medieval Nara.

The imperial capital moved again in 784, and Nara's role along the maritime Silk Roads diminished. It remained a centre of Buddhist learning however, and the city's religious monuments continued to receive patronage. The Todai and Kofuku Temples were destroyed and rebuilt in the 12th century, with the Kofuku Temple being reconstructed in the traditional Japanese Wayo style, and the Todai Temple designed in the Great Buddha (or Daibutsuyo) style introduced from Sung Dynasty China. These and the many other historic temples and monuments found in Nara today are among the finest examples of the cultural and religious exchanges that took place at the eastern edge of the Silk Roads. 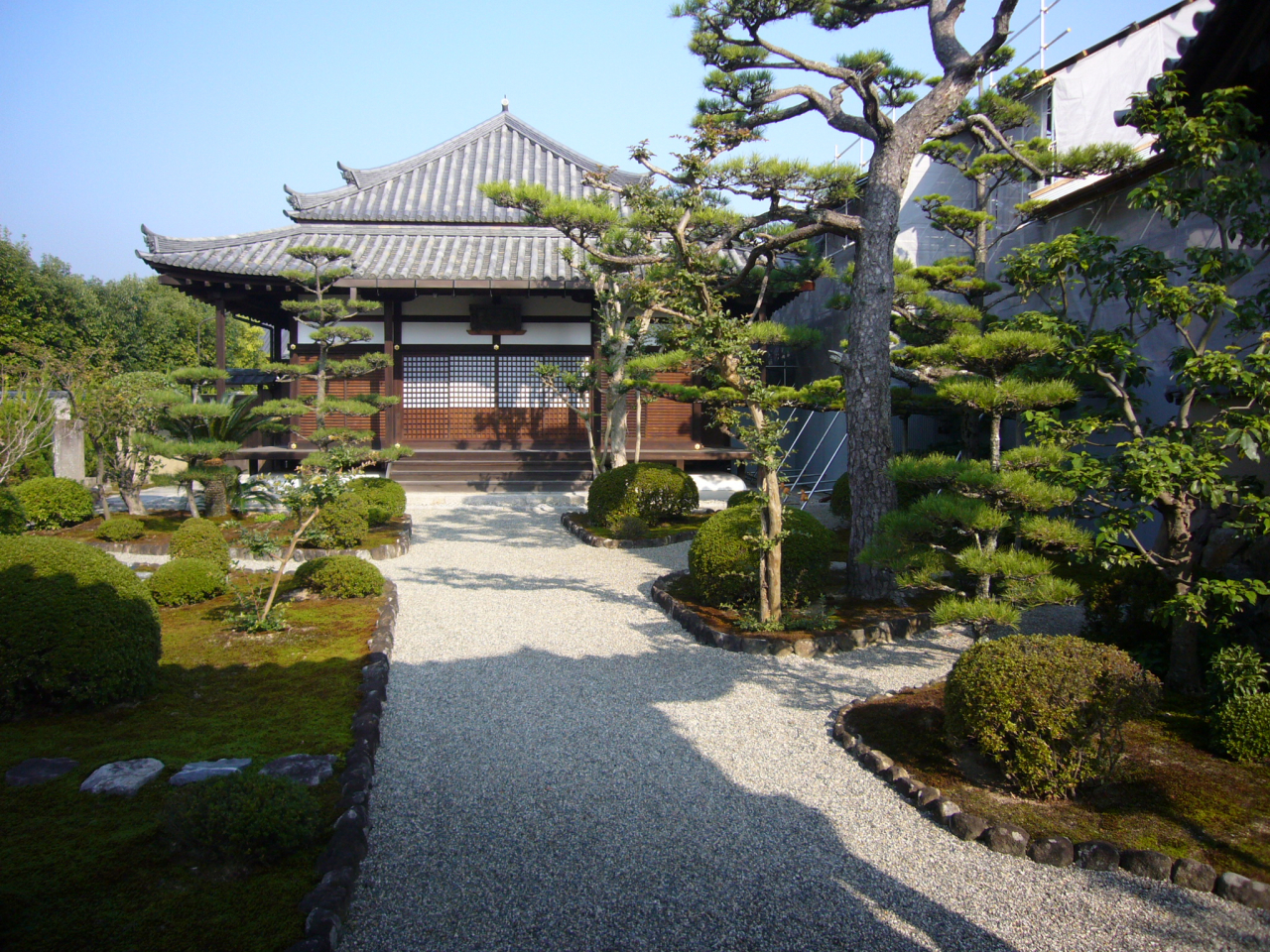 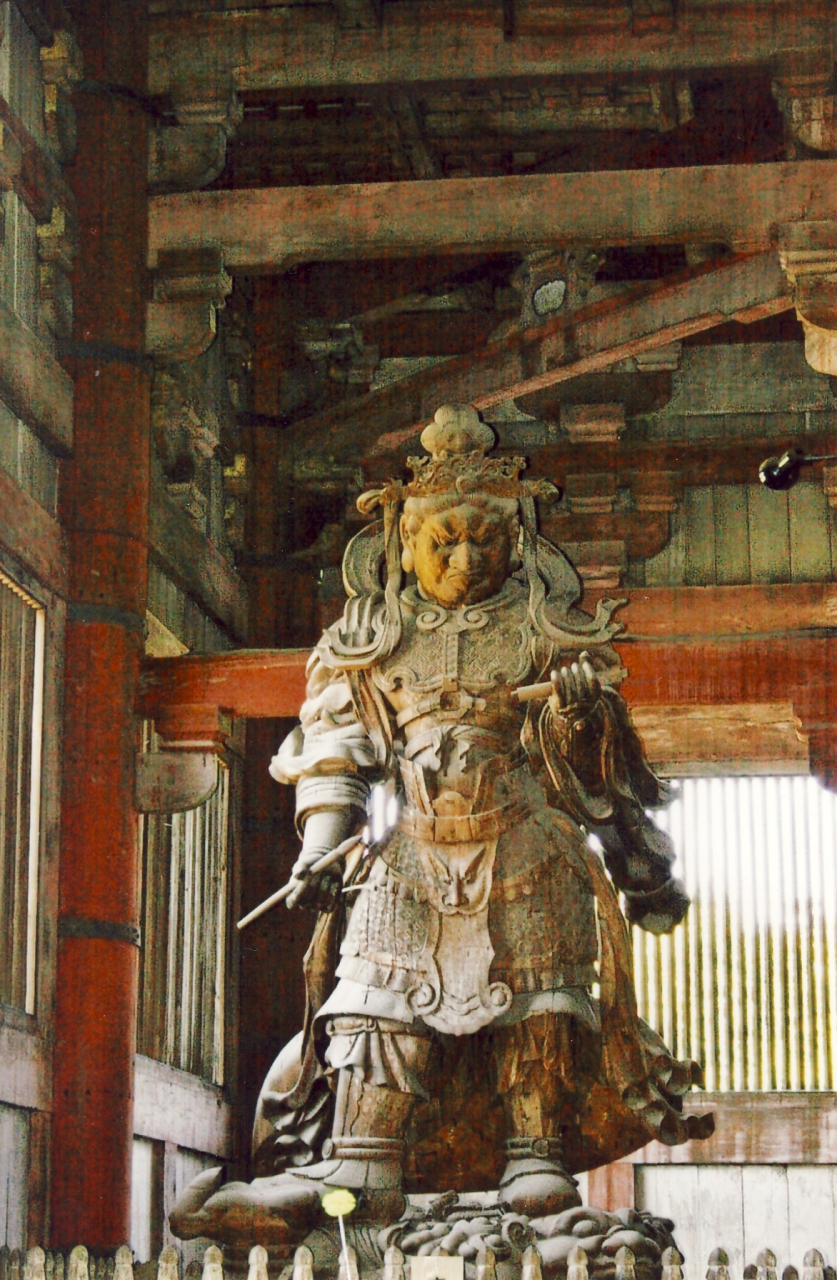 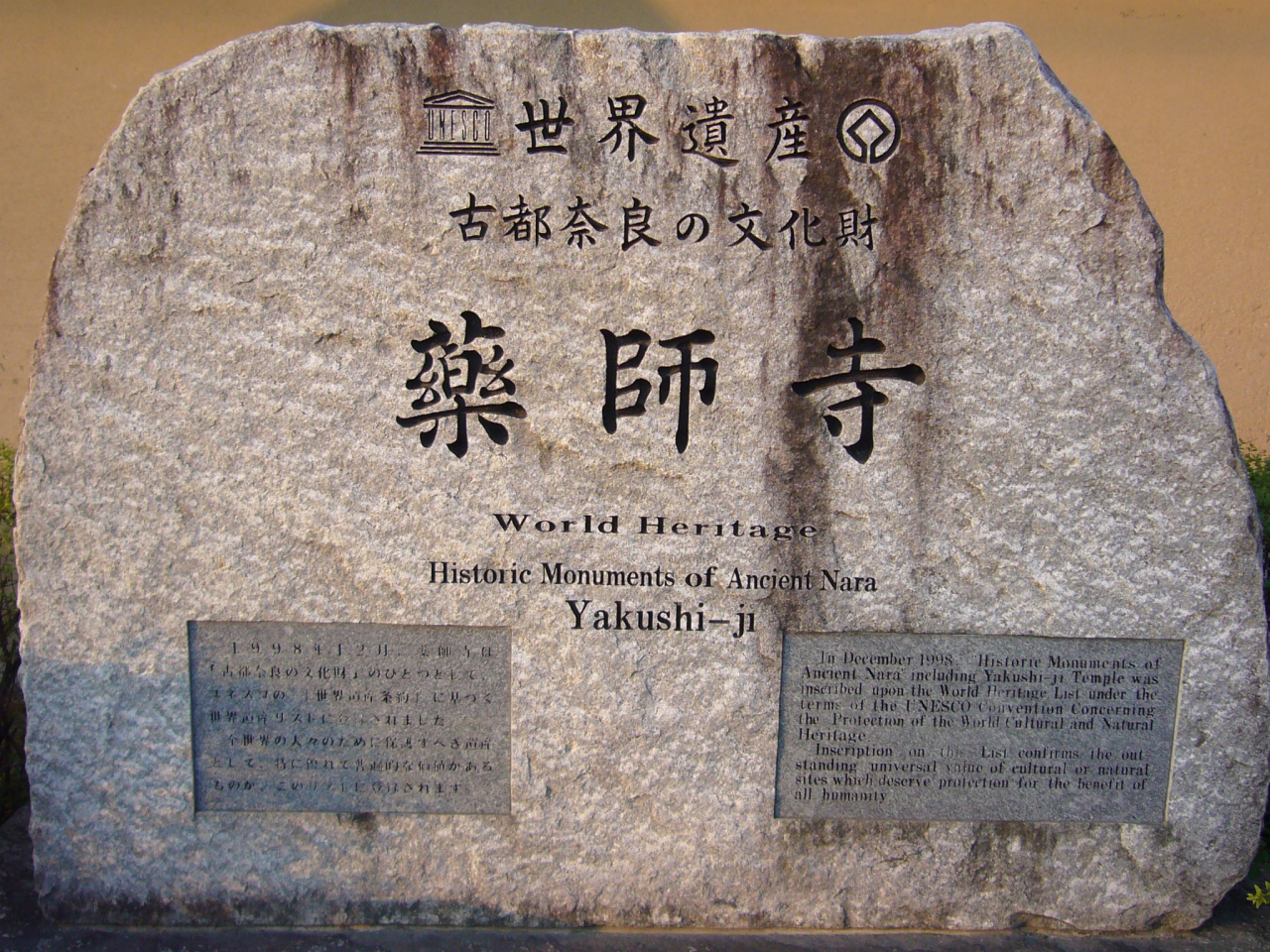 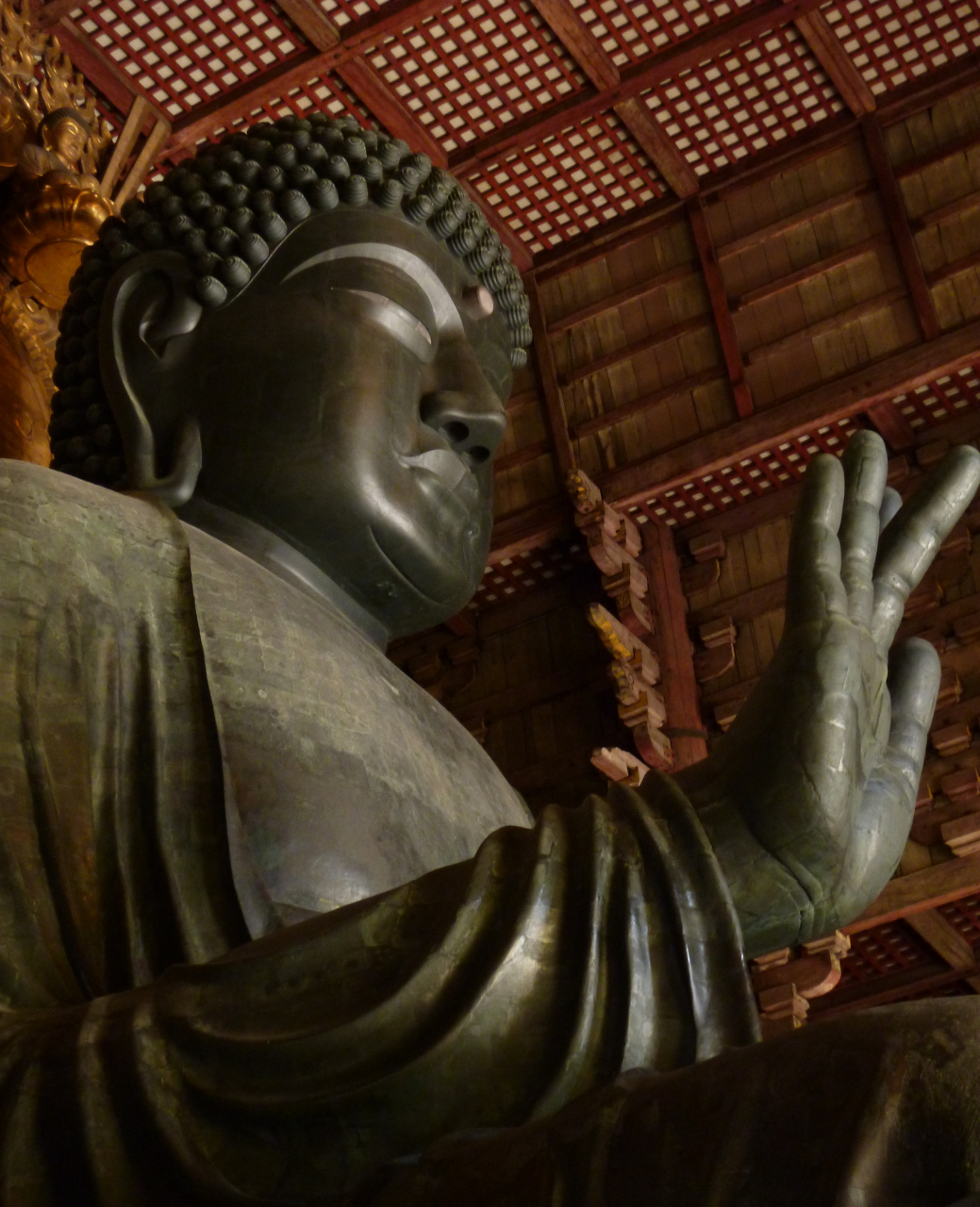 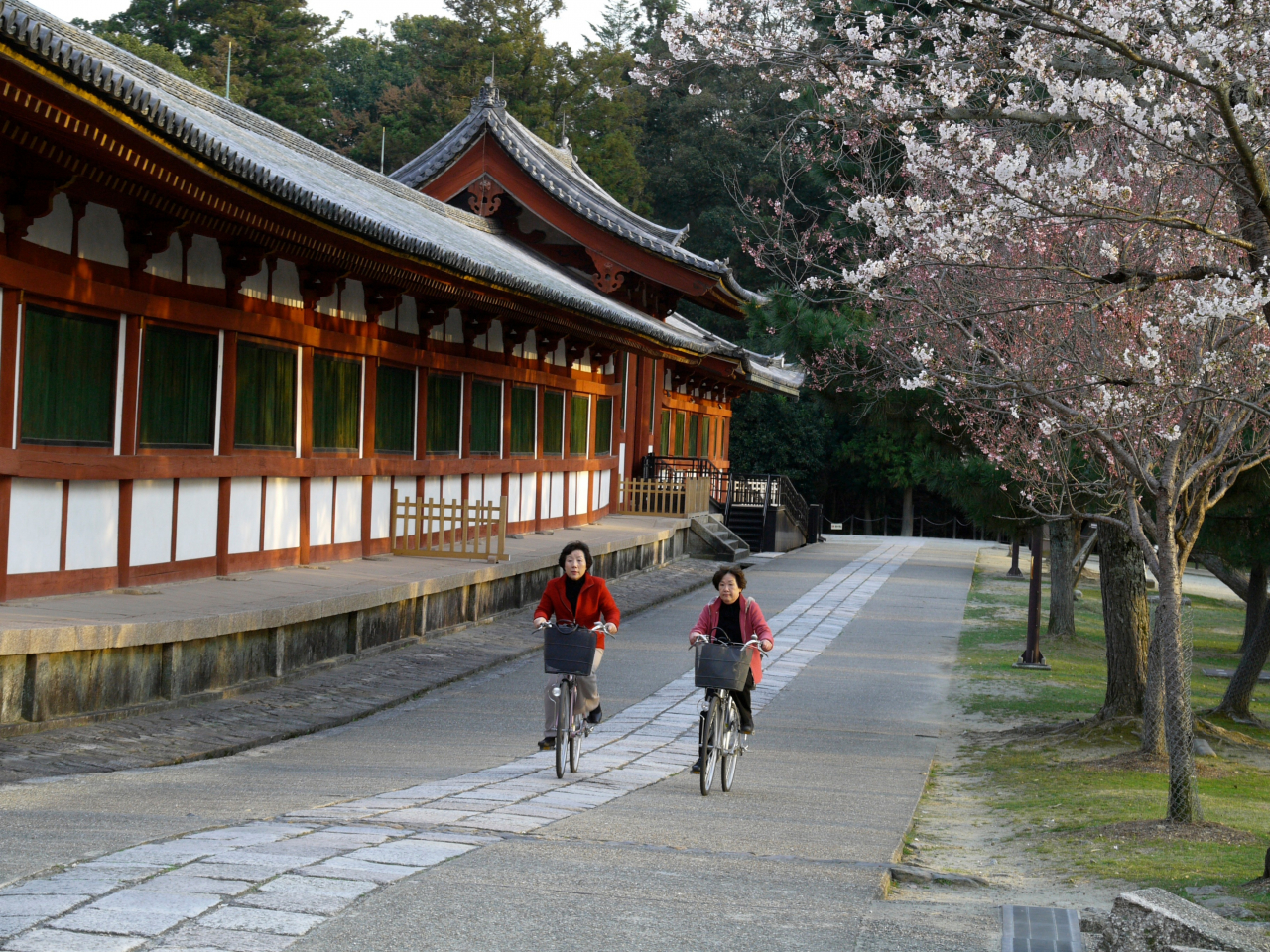