The city of Ephesus was one of the largest and most important cities in the ancient Mediterranean world, lying on the western coast of Asia Minor (in modern day Turkey). It was one of the oldest Greek settlements on the Aegean Sea, and later the provincial seat of Roman government in Asia. Situated at end of the Royal Road—the chief thoroughfare of the Roman East—the city was a western terminus of East-West trade, with one of the most important Mediterranean harbours for exporting products to Greece, Italy and the rest of the Roman West. The city itself developed around an ancient shrine of the earth goddess Artemis (Roman Diana), and later, from the beginning of the Christian era, became a key city in the expansion of Christianity, from which St Paul launched many of his missions.

Little is known of the city’s origins. Greek settlements dotted the coast of Asia Minor as early as the Bronze Age (in the second millennium BC) and increased during the age of Greek colonization (ca. 700 BC). Interspersed among these were settlements of non-Greeks, such as native Anatolians and Phoenician traders. Ruled by a succession of conquerors, including the Persians and the Greeks, under the Roman Republic, Ephesus held the technical status of a “free” city, although it was ultimately subject to Roman control. However it was allowed to coin its own money and operate its own city council.

In the Imperial era, Ephesus became the seat of Roman government in the new province of Asia, while Caesar Augustus’ reforms improved the city economy and initiated a time of peace and prosperity which would last down to the third century AD. Many of the great ruins in Ephesus today were completed during the reigns of Caesar Augustus (r. 27 BC - 14 AD) and his successor Tiberius (r.14-37 AD). These include, for example, the town-hall (the Prytaneion), a hippodrome stadium, and new aqueduct lines. Throughout the Pax Romana (a time of prosperity and stability roughly spanning from Augustus to 180 AD,) civic development continued in Ephesus on a grand scale. During this time, such Hellenistic sites as the famous theatre were revamped and new Roman sites like the Odeum (a theatre used for city council meetings and theatrical performances), the library of Celsus, the state Agora (or city square), bath houses and public latrines were built.

The heart of the business district of ancient Ephesus was the market square, which acted as a hub for the trade that arrived in the city from across the Empire, and particularly, the Roman East. This marketplace is 112 meters square, encompassed on all four sides by a two storied stoa (a covered passageway, lined with columns) which presumably contained merchant stalls. Its construction began under the reign of Tiberius, in about the year 23 AD, and was completely finished about thirty years later, although according to dedicatory inscriptions, it appears to have been open for business by as early as 43 AD. The market would have been supplied by the city’s man-made city harbour, which was surrounded by warehouses filled with products being shipped west or arriving from the eastern provinces and beyond via caravans of merchants along the Royal Road. 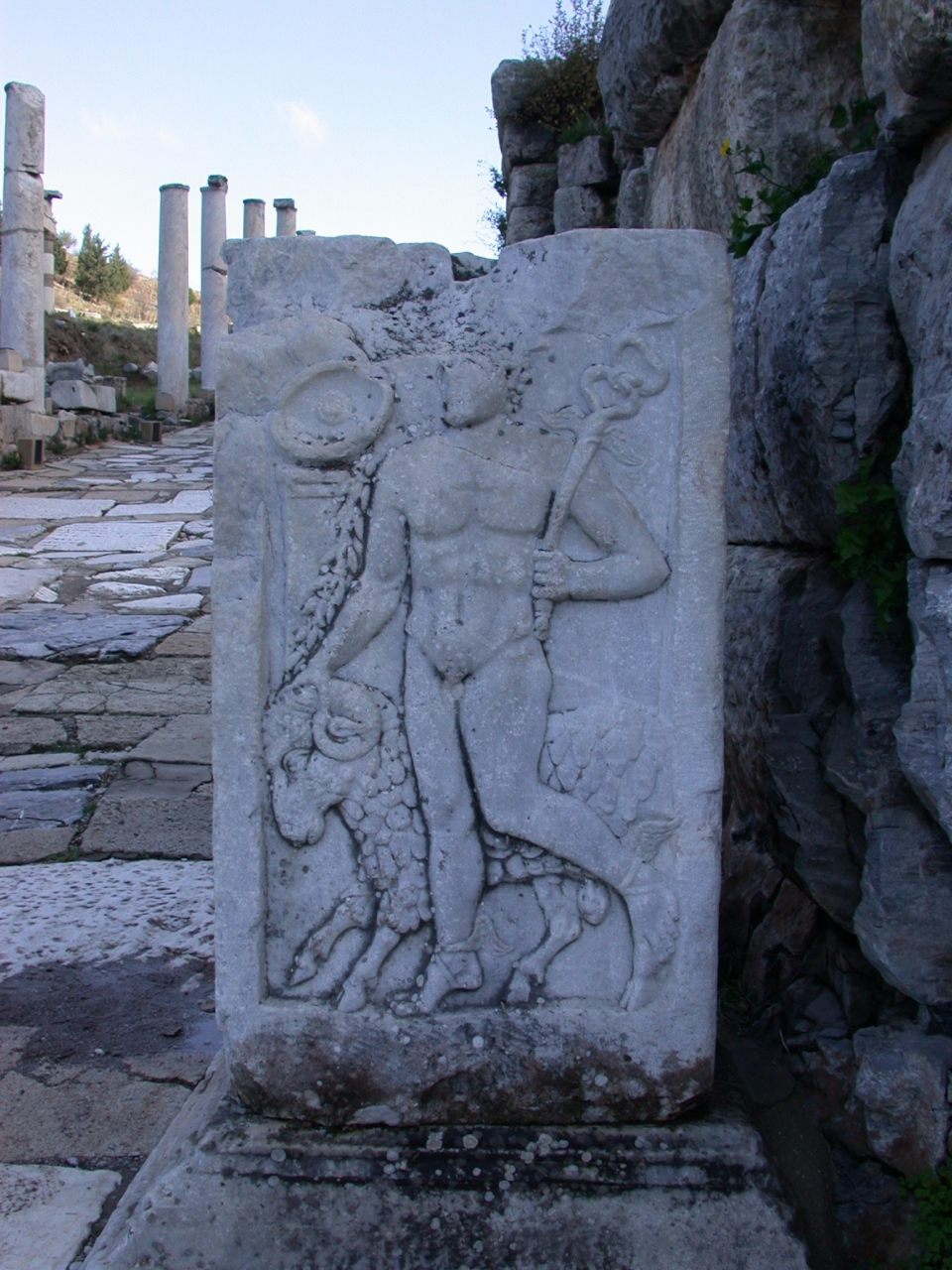 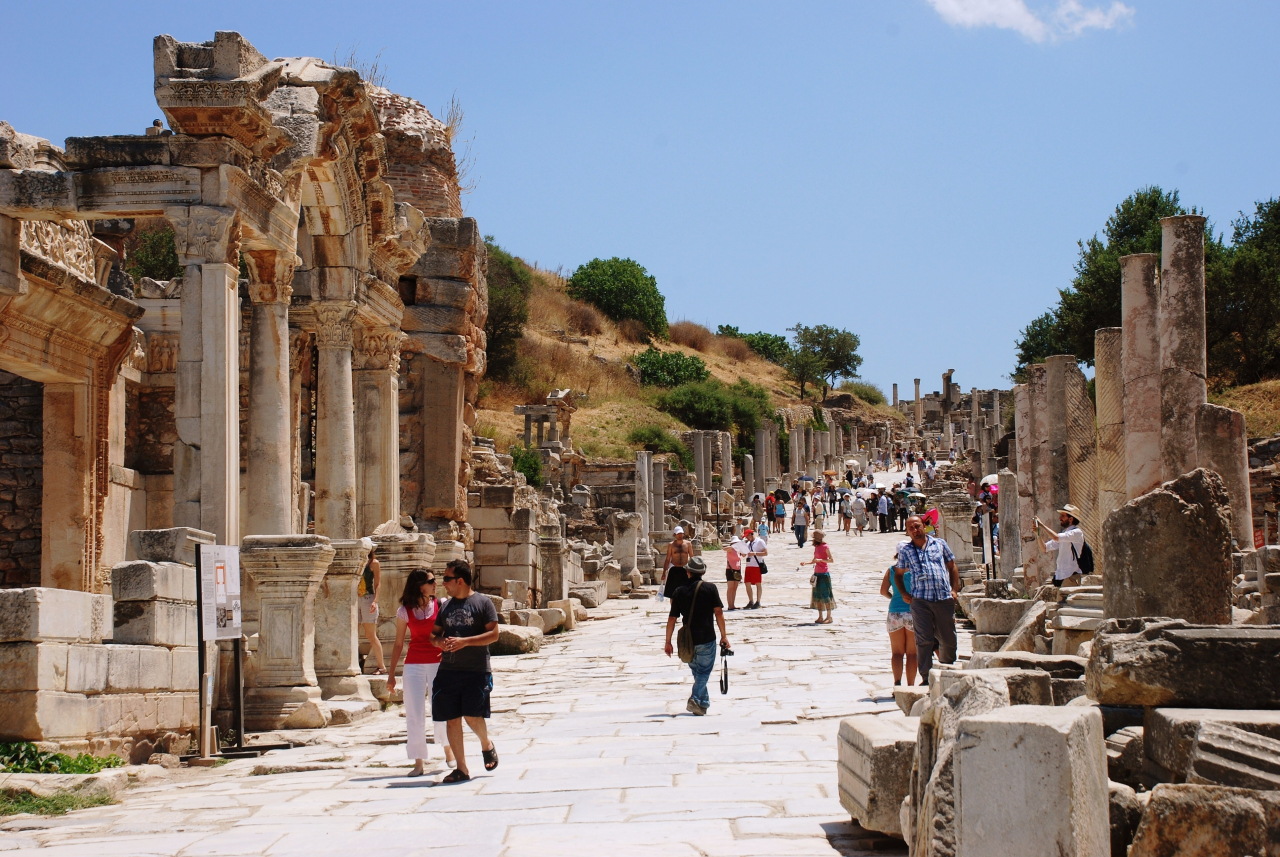 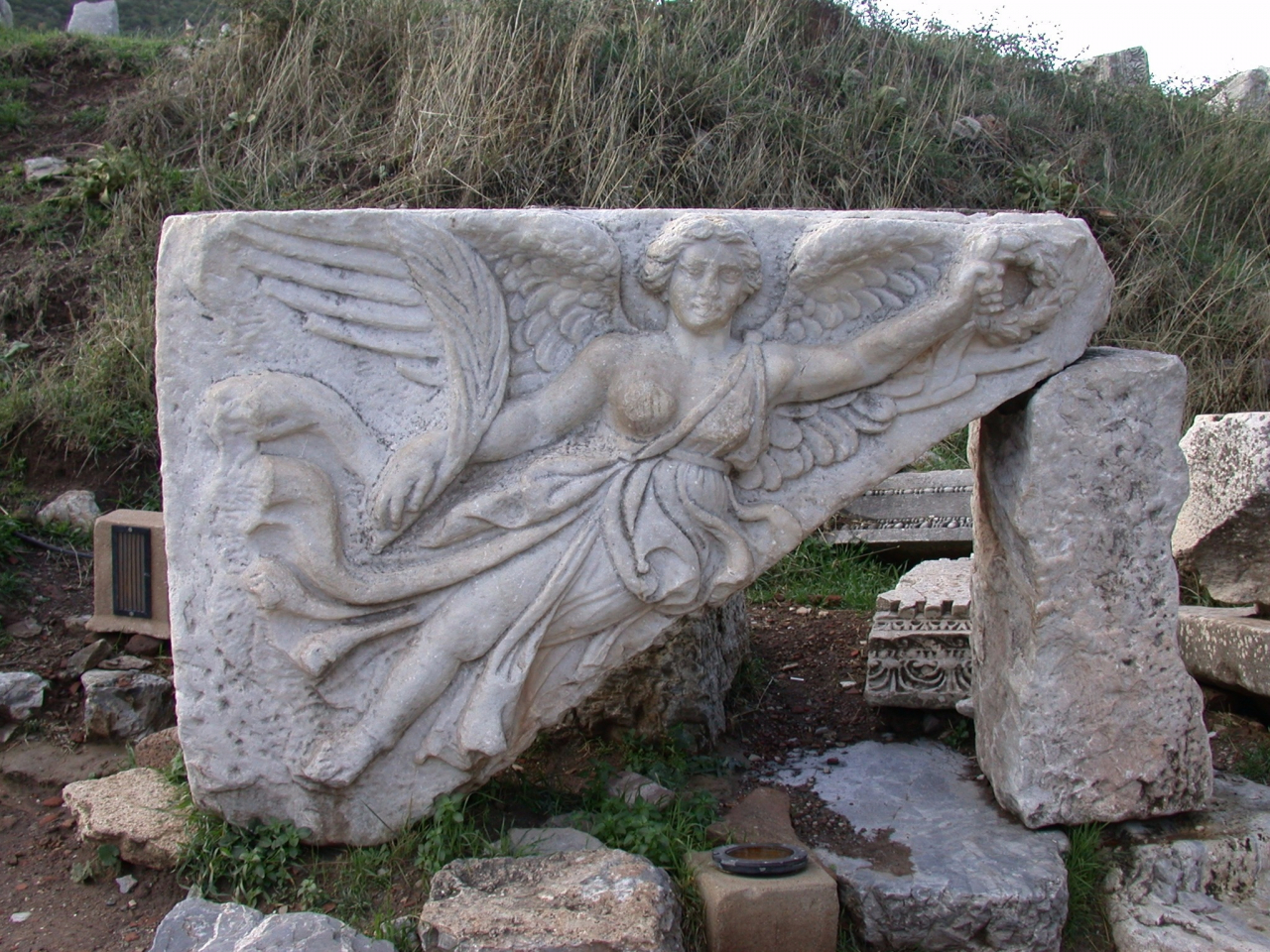 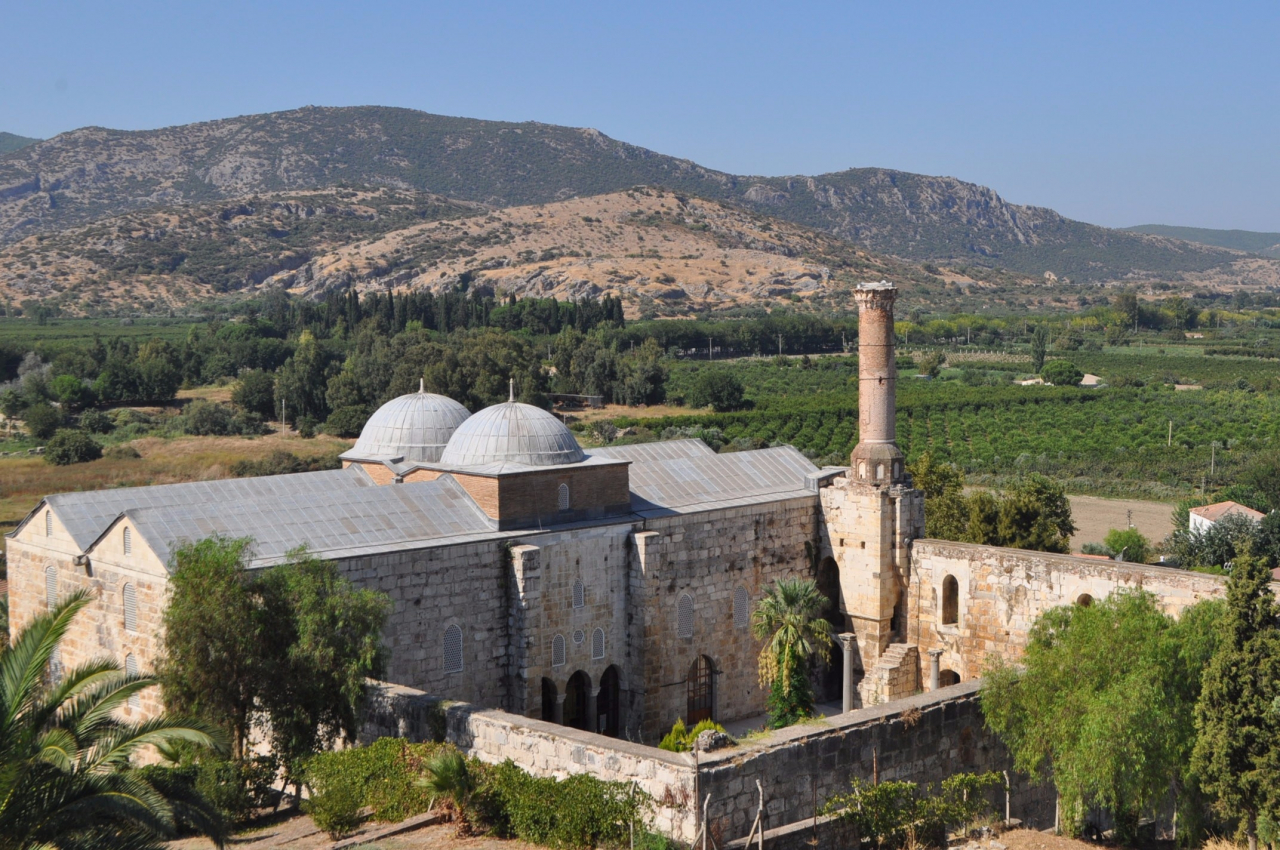 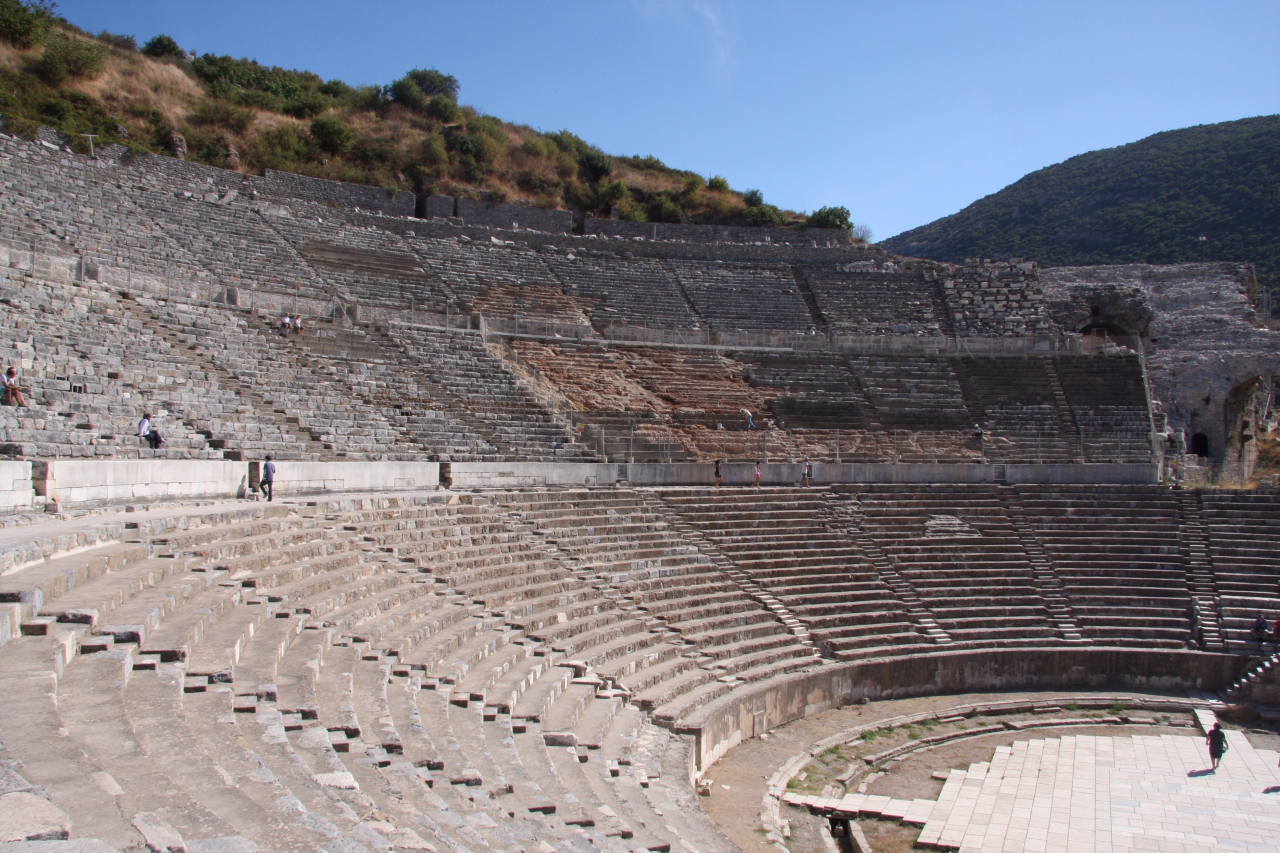