Textiles are a vital and diverse element of the legacy of the exchanges which occurred along the historic Silk Roads. Today, the study of textiles remains an important means of charting these exchanges and cross-cultural influences within the arts as apparent in the various styles, motifs, designs, materials, and uses of textiles from across Eurasia. Despite the fact that they often survive only in relatively small fragments, textiles and clothing uncovered from archaeological sites can reveal the complex mutual influences amongst regions connected by the Silk Roads. However, the importance of textiles in terms of their role as vectors of cultural exchange is not only evidenced within surviving textiles themselves but can also been seen in other fields of the arts particularly within painting, murals, and other decorative coatings for walls. One interesting example of this from along the Silk Roads, which showcases both the artistic influence of portable textiles as well as reveals a host of cross-cultural exchanges in artistic motifs, is found on the walls of the remains of an Umayyad (661 – 750 CE) palace near the ancient city of Jericho.

Although the specifics of its patronage remain unknown, the site, which dates from the early 8th century CE, is often referred to as ‘Hisham’s Palace’. In addition to a large palace, the site once comprised of a bath complex and a large agricultural estate with a complex irrigation system. As was common throughout much of Ancient and Medieval history, the interiors of the palace would have been extensively decorated with textiles, such as curtains, hangings, carpets, and mats. However, due to the fragile nature of much of this material, surviving examples of such textiles are rare. Despite this, the influence of textiles on the decorative styles utilised during this time period remains apparent in some surviving features of the palace, namely decorative wall panels of carved stucco (a construction material made of aggregates, a binder, and water) and numerous painted murals. Scholars have argued that these wall adornments not only resemble, but were in fact a deliberate imitation of, wall textiles, carpets, and other portable textiles. Additionally, it has been suggested that the origins of a number of the design motifs present on these wall decorations lie in regions from along the Silk Roads and which may have reached the Umayyads via the exchange of portable silk and wool textiles throughout the 7th and 8th centuries CE with China, Sassanid Iran, Sogdiana, Central Asia, Byzantium, and Egypt.

In particular, two design elements and motifs on the palace walls stand out as reflecting the cultural interactions occurring at the time via the exchange of portable textiles. The first is the presence on the murals of a ‘simurgh’, a mythical creature with the head of a dog, lion paws, and a peacock tail, set inside a repeating geometric pattern in a similar manner to many textiles. This figure is commonly found in art from the Iranian Plateau across numerous time periods and has also featured in the iconography of the Eastern Roman Empire, and what is today Armenia, Azerbaijan, and Georgia. During this time, this mythical creature was commonly found in Sasanian art, usually symbolising royalty. Its use spread to other regions along the Silk Roads with a simurgh also appearing on the Sogdian ‘Ambassador’s painting’, an outstanding and rare surviving example of Sogdian art which dates from the 7th century CE and was uncovered on the walls of a private house in the ancient city of Afrasiab near present day Samarkand, Uzbekistan.

The second motif present on the Umayyad palace wall decorations, which has been interpreted as influenced by textile exchange, is a stucco panel featuring three-dimensional human figures enclosed in interlacing pearled medallions. Whilst this exact design is not often seen on textiles, in covering the entire wall the stucco panel resembles a wall carpet. Moreover, stucco busts, or human heads enclosed in frames, usually pearl medallions, were a common decorative motif in Persian palaces and pearl medallions in general were often featured on textiles from the Iranian Plateau and regions of Central Asia. Indeed, Sasanian textiles were celebrated in Classical, Islamic, and Chinese sources as highly valuable commodities of exchange and which likely influenced the production of many imitations, including within the designs on the walls at the Umayyad palace.

The origins of both the murals and the stucco panels at the Umayyad palace appear to be textile imitations from Sasanian Iran and Central Asia, particularly Sogdiana, influences which reached the Umayyads via trade in luxury goods and through diplomatic gifts which played an important role in shaping a shared cosmopolitan artistic culture. These similarities between textiles and decorative wall coatings are just one of many examples of the complex ways in which artistic features were exchanged, adopted, and reformed by different societies along these routes, an artistic legacy which remains evident in textiles in the present day. 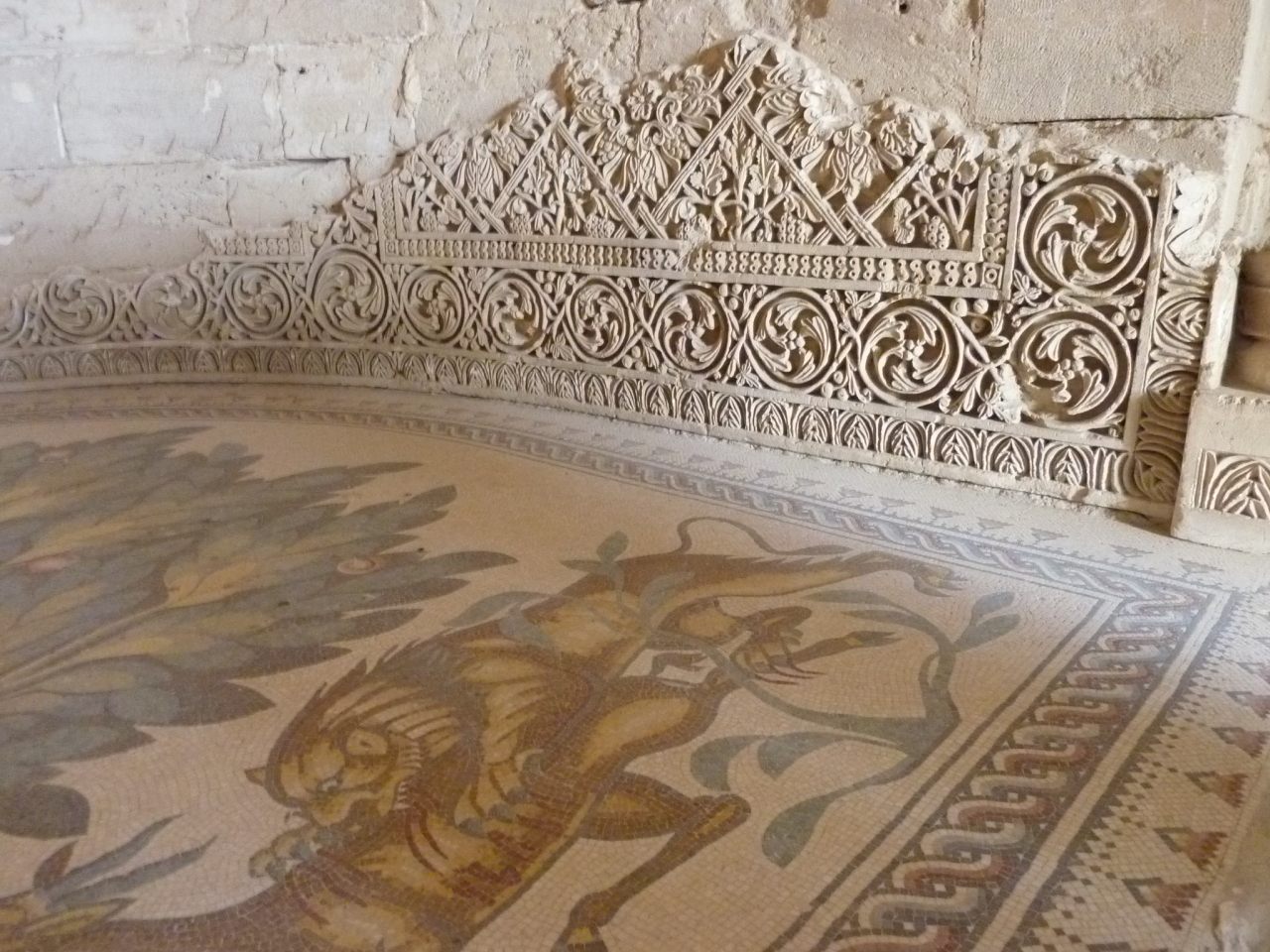 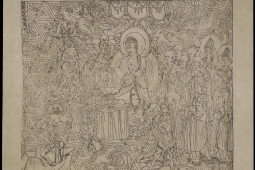 Elements of Exchange Reflected in Early Printed Texts from the Silk Roads, such as the ‘Diamond Sutra