The Noosa Biosphere Reserve is situated in Eastern Australia at the northern end of the Southeast Queensland region. A combination of erosion, the deposition of underlying geological formations, growth, sand erosion and Aeolian transport produced the topography of the area. While the eastern part of the reserve comprises littoral rainforests, lake systems and coastal dune heaths, the western and northwestern regions are rather mountainous with elevations up to 450 metres. Inselbergs that rise up to 430 metres, such as Mount Cooroy, Mount Cooroora and Mount Cooran, dominate the western landscape. The reserve also features an extensive system of saline and freshwater lakes, heathlands and marshes. 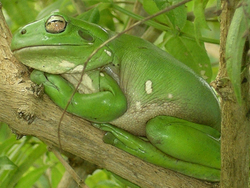 The southern coastline of Noosa is dominated by sand dunes featuring different types of vegetation that rise over 100 metres. The Biosphere Reserve is characterized by rich vegetation in tall, open eucalyptus forests and melaleuca. While renowned for its large diversity in flora and fauna, the Biosphere Reserve is globally recognized for its effective conservation approach. Approximately 1,365 species of higher flora have been identified across 63 distinct ecosystems, of which 10 are endangered (these cover 13.4% of remnant vegetation within the reserve). Endangered and vulnerable flora species include Boronia keysii (a shrub), Eucalyptus conglomerate (a stringybark) and Tecomanthe hillii(Rainforest vine). In addition, the Cooloola area contains the largest remaining area of vegetation growing on Aeolian sands.

Noosa is also home to the largest variety of amphibians, birds, snakes and bats in all Australia. Altogether, around 711 species of native fauna live within the reserve, including 78 butterflies, 303 birds, 64 mammals, 30 amphibians, and 121 marine and 22 freshwater fish. The extensive lake and river system of the area produces ideal conditions for the growth of mangroves and rainforest. These, in return, provide numerous habitats for globally unique fauna species. All in all, 30 fauna species are of international importance, and around 45% of all resident and regular migratory birds in Australia live in Noosa. Moreover, wet sclerophyll forests contain the highest number of endangered or threatened reptile and mammal species: 66 fauna species are rare and threatened. Examples include Litoria cooloolensis (Cooloola Sedge frog), Sterna albifrons Sinensis (Little Tern) and Xeromys myoides (False Water-rat). 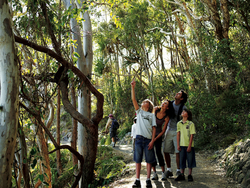 The eastern coastal areas of Noosa are mainly urbanized; 15,000 people visit the reserve seasonally and 50,500 reside permanently in the Noosa Shire. Statistically, only 0.8% indigenous Australians live in the area, while 93.2% of the population are Australian or originate from an English-speaking country. Local and national authorities pay great attention to population growth within the area, since Noosa aims to retain its great ecological and historical value. Approximately 1.65 million tourists vacation within and near the reserve. However, they undertake only certain activities that are healthy for the environment, such as birdwatching and nature hikes. Today, the main economic activities in the reserve are sustainable agriculture and forestry.

Aboriginals occupied the area 20,000 years before the present day. Evidence of their habitation can still be discovered. Middens found in Teewah Beach are of great archaeological value and are listed on Atralia’s Register of the National Estate. In addition, ceremonial sites exist at Lake Cooroibah and Lake Cootharaba. Many campsites are located at Cooran Lagoon. The first European to set foot in the area was James Cook in 1770. European settlers followed, occupying the area and exploiting the timber industry. European settlements also resulted in major conflicts with the Aboriginals. Consequently, cultural information was lost until 1967, when the “Aboriginal Relics and Preservation Act” was passed to protect Aboriginal relics.