On the eve of the twenty-first century over half the world's population will be living in cities. Urbanization is proceeding at a pace that would have been unimaginable a few decades ago.

In the developing countries, rapid population growth and the concentration of economic activity around big cities have swelled a massive influx of urban migrants which governments can no longer reverse or even slow down. Rampant urbanization has gone hand in hand with inner city decline, proliferating squatter settlements, and the construction of illegal dwellings in mushrooming slums and shanty towns.

The industrialized countries, where around 80 per cent of the population already lives in urban areas, are also facing problems. Where they have survived the ravages of war or the Utopian dreams of planners, many historic city centres are a prey to speculation and pollution, while soulless suburban development testifies to the failure of ill-thought-out approaches to urban planning.

Cities everywhere present increasingly striking contrasts. Though they may produce much of a country's wealth, they also bear the brunt of its poverty.

It is high time to mobilize this wealth to create urban centres fit for people to live in, to return the city to those who live in it. Many city-dwellers deploy indomitable forces of ingenuity, tenacity and solidarity in a struggle for survival. These energies must be tapped if we are to avert tragedy and create a bright urban future. 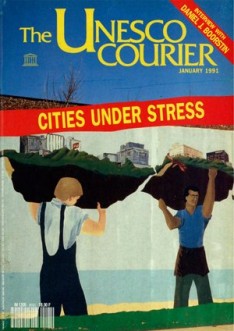