The Mariñas Coruñesas e Terras do Mandeo biosphere reserve is located on the Cantabrian-Atlantic coast of Galicia to the northwest of the Iberian Peninsula. The territory consists mainly of two large river basins belonging to the rivers Mero and Mandeo, and includes other small coastal watersheds. 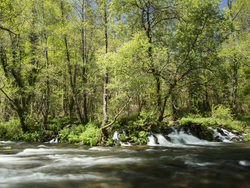 The main natural elements of the biosphere reserve are the river corridors, which are crucial for the conservation of habitats and species. These areas sheltered humid subtropical species (Culcita macrocarpa, Woodwardia radicans, Vandenboschia speciosa) during the cold periods of the Quaternary, and facilitated the expansion of these and other species into higher-altitude areas during thermal periods.

The river corridors also include much of the country's representative natural forests. These are home to a significant number of unique species, many of which are threatened or endemic. These forests are popularly known in Galicia as 'fragas' (Quercus robur and Quercus Pyrenees).

The biosphere reserve also has more than 17 000 ha of shrubland, which is home to a wide diversity of flora and fauna, including endemic, rare and endangered relict species. 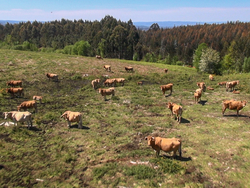 The area has an important cultural diversity, linked to the use of natural resources (e.g. production of fertilizers and honey) and the conservation of local breeds of livestock.

The main economic activities are the service industry, tourism, agriculture, livestock and forestry.

Historically, the territory was the main food provider for the city of A Coruña. However, in recent decades many agricultural lands have been abandoned, which has led to depopulation in rural areas, and, consequently, the risk of fires, loss of biodiversity and traditional landscape.

For this reason, Mariñas Coruñesas is creating a Local Food System. It promotes organic agriculture as an employment opportunity among young people. For more information on this initiative and other good practices in biosphere reserves, check out our section on Good Practices of the World Network of Biosphere Reserves.