Shiga Highland Biosphere Reserve is located in the central part of Honshu in Japan, spreading over 5 municipalities in 2 prefectures, namely Yamanouchi Town and Takayama Village of Nagano Prefecture and Nakanojo Town (former Kuni Village), Kusatsu Town and Tsumagoi Village of Gunma Prefecture. The Core Area and Buffer Zone overlap Joshin’etsukogen National Park. The volcanic lake of Mt. Shirane is reputed to be the most acid lake in the world with a pH of 0.8. 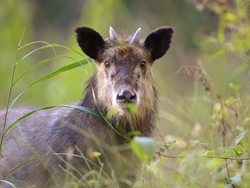 The geographical features of the Shiga Highland Biosphere Reserve are the mountains formed by volcanic activities and valleys, river terraces, and alluvial fans formed by rivers. The surface layer of the mountains and valleys is covered by forests while habitats, paddy fields, fields, and orchards are spread around the river terraces and alluvial fans. Mt. Shirane in the southeast of the Buffer Zone is an active volcano, around which vegetation affected by the volcanic activity exists.

While deciduous broad-leaved forests spread across the zone at less than 1,600-1,700 m above sea level, the parts affected by humans are covered by secondary forests of broad-leaved deciduous trees, planted coniferous forests, or bamboo bushes.

Habitats, paddy fields, fields, and orchards spread around the river terraces, alluvial fans, and hills less than 800 m above sea level where volcanic hot springs rise in many places. In the rural zone, the landscape of typical Japanese Satoyama, which comprises secondary forests managed by humans and pastoral land, can be seen. 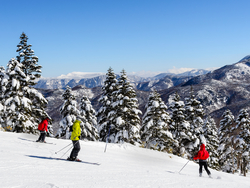 Major industries are agriculture focusing on the cultivation of rice, vegetables, and fruits and tourism based on spas and ski resorts, which benefit from the ecosystem services by making the most of the topographical features and natural environment.

The municipalities are taking the lead in the promotion of environmental conservation-oriented agriculture since the 1980s as well as renewable energy to implement the activities for the development of a sustainable society.