Located in the state of Sikkim, bordering Nepal to the west and Tibet (China) to the north-west, this biosphere reserve is one of the highest ecosystems in the world, reaching elevations of 1,220 to 8,586 metres above sea level. The site is one of the world’s 34 biodiversity hotspots. It includes vast natural forests that support high species diversity with high levels of endemism. The main economic activities are agricultural and horticultural crops, animal husbandry, fish, dairy and poultry farming. 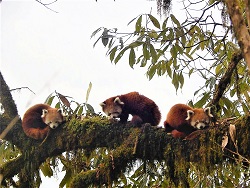 Situated over the Himalayan trans-axial belt, the Biosphere Reserve’s most common constituents are valleys with numerous ravines, deep gorges and gullies, saddles, crests, knolls and river-terraces. These are mostly found in the lower part of the mountains. At the high reaches, the hill slopes are moulded into gentler alpine meadows. Several lakes of different sizes are also found at this belt. Further up the important topographic features are rocky outcrops at the base of Himalayas, with glacial moraines, scarps, talons, etc. There are 73 important lakes, covering 3.34 km2 area, which embedded in seven watersheds. The glaciers, mountains and peaks take up permanent position at the highest points of the reserve.

The biosphere reserve is a trans-boundary bio-diversity hotspot conservation area. There are about 22 endemic and 22 rare and threatened plants in the area. The reserve also housed some of the newly described plant taxa such as, Myrmechis bakhimensis (Orchidaceae), Craniotome furcata var. sikkimensis (Lamiaceae), Craniotome furcata var. ureolata (Lamiaceae) and Cortiella gauri (Apiaceae). The epiphytes and lianas are abundant here. Besides, there are about 30 species of rhododendrons recorded and out of over 42 confirmed mammal species belonging to 16 families in the area. 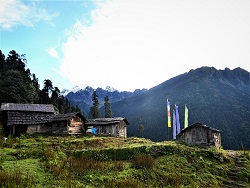 The biosphere reserve has high religious significance and cultural values. Many of the mountains and peaks, lakes, caves, rocks, stupas (shrines) and hot springs are the sacred and pilgrimage sites. There are no local communities within the biosphere reserve. In the transition zone, there are 8,353 families with a population of 35,757 people living in 44 villages.

The rural economy of the area mostly depends on traditional farming, horticulture and animal husbandry, apart from a few openings through tourism. However, all these activities are low-key enterprises with ephemeral incomes. About 75% of the households are considered to be at subsistence level and they do not much depend on the Biosphere Reserve for their livelihood.