Great Nicobar is the southernmost island of the Nicobar Islands Archipelago. It covers 103 870 hectares of unique and threatened tropical evergreen forest ecosystems. It is home to a very rich ecosystems, including 650 species of angiosperms, ferns, gymnosperms, bryophytes, among others. In terms of fauna, there are over 1800 species, some of which are endemic to this area. 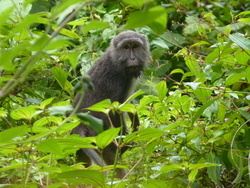 The Great Nicobar Biosphere Reserve harbours a wide spectrum of ecosystems comprising tropical wet evergreen forests, mountain ranges reaching a height of 642 m (Mt. Thullier) above sea level, and coastal plains. The region is noted for its rich biodiversity. It houses 650 species of angiosperms, ferns, gymnosperms, bryophytes and lichens among others. The tract is rich in plant diversity and fosters a number of rare and endemic species, including Cyathea albosetacea (tree fern) and Phalaenopsis speciosa (orchid). A total of 14 species of mammals, 71 species of birds, 26 species of reptiles, 10 species of amphibians and 113 species of fish have been reported. The region also harbours a large number of endemic and endangered species of fauna. To date, 11 species of mammals, 32 species of birds, 7 species of reptiles and 4 species of amphibians have been found to be endemic. Of these, the well-known Crab-eating Macaque, Nicobar Tree Shrew, Dugong, Nicobar Megapode, Serpent Eagle, salt water crocodile, marine turtles and Reticulated Python are endemic and/or endangered. 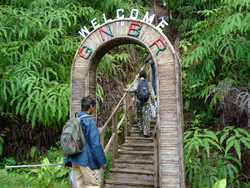 The Mongoloid Shompen Tribe, about 200 in number, live in the forests of the biosphere reserve particularly along the rivers and streams. They are hunters and food gatherers, dependent on forest and marine resources for sustenance. Another Mongoloid Tribe, Nicobarese, about 300 in number, used to live in settlements along the west coast. After the tsunami in 2004, which devastated their settlement on the western coast, they were relocated to Afra Bay in the North Coast and Campbell Bay. They survive on fish caught from the sea. The settlers and mainlanders, which number over 8 000, live along the southeast coast of the island, practising agriculture, horticulture and fishing. The Shompens move between the Core and Buffer Zones, while the settlers and Nicobarese live in settlements spread along the coast in the Transition zone.