The region of the Saloum Delta is a remarkable testimony to the synergy between a natural environment with extensive biodiversity and a style of human development that is still present albeit fragile. Located in the center west of the country, it is an interesing site in terms of conservation of the biological diversity, because the Biosphere reserve is characterized by a great diversity of habitats, including savannah, mangrove, sandy islets, lagoons and shorelines.

For instance, the region is home to a quarter of the world's population of King Terns (Sterna maxima albidorsalis). Bird Island is also the world's first hibernation and breeding site for this endangered species. 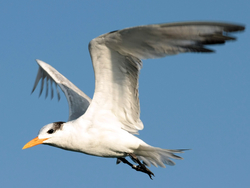 This biosphere reserve and national park is situated in the Delta of the seasonal Sine and Saloum rivers about 150 km south-east of Dakar. The biosphere reserve comprises 72,000 hectares marine areas, 23,000 hectares of flooded areas, and 85,000 hectares of terrestrial islands. Mangroves are dominant, but sand dunes, open forest on sandy soils, coastal waters and sand islands also characterize the area. The mangrove is principally made up of four species: Rhizophora racemosa, R. mangle, R. harrisonii and Avicennia nitida.

Sustainable shellfish gathering and fishing practices in brackish water, and the processing of the harvest for its preservation and export was developed here. The shell mounds and the tumulus mounds form specific and exceptional cultural landscapes.

On the other hand, there is a permanent threat to the mangroves by extension of rice culture and forest exploitation in the Fathala area. Other impacts on the environment include fires in the forest zone, excessive fishing, destruction of bird colonies and conflicts with industrial and agricultural development. Grassroot village associations play a critical role in mangrove restoration programmes, including the establishment of nurseries and setting up of reforestation plots. Village community organizations also have a key function in combining traditional and modern practices in fisheries or to set up ‘eco-guards’. In cooperation with the Direction des Parcs Nationaux, the IUCN regional office based in Dakar is working with the local communities and with national agencies and students of the University of Dakar on an integrated management plan for the Delta du Saloum Biosphere Reserve.