Timeline of the global education movement 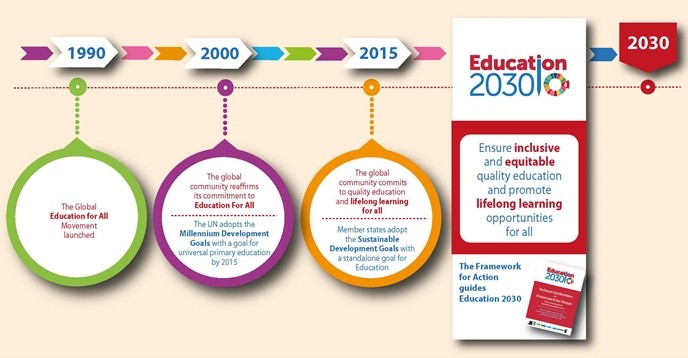 The right to education was enshrined in UNESCO’s constitution in 1945 following the guiding fundamental principles of non-discrimination, equality of opportunity, universal access and solidarity. The Universal Declaration of Human Rights adopted in 1948 defined education as a fundamental human right.

The Global Education 2030 Agenda is a new agenda which is based on the United Nations’ Sustainable Development Goal 4 on education. This new agenda represents the culmination of global action in expanding educational opportunity.

The move for greater international cooperation in education began in 1990 with the adoption of the World Declaration on Education for All, in Jomtien, Thailand, by some 150 governmental and non-governmental organizations. The aim was to create universal access to basic education for all children, youth and adults by the end of the decade.

This was not achieved by 2000 when new impetus was given at the World Education Forum in Dakar where 164 governments pledged to achieve 6 Education for All (EFA) goals incorporating the concepts of gender equality and quality education.

In 2000, the United Nations adopted the 8 Millennium Development Goals with Goal 2 being to achieve universal primary education by 2015.

In 2015, the World Education Forum in Incheon, Republic of Korea adopted the Incheon Declaration reaffirming the Education for All commitments of Jomtien and Dakar and committing to the new Global Education 2030 Agenda.