The UN General Assembly Resolution 56/183 (21 December 2001) endorsed the holding of the World Summit on the Information Society (WSIS) in two phases. The first phase took place in Geneva from 10 to 12 December 2003 and the second phase took place in Tunis, from 16 to 18 November 2005. Outcomes were reviewed by Member States at UN Headquarters in New York at the WSIS tenth anniversary (WSIS+10). The forthcoming review process, WSIS+20, will be held in 2025.

UNESCO themes and approaches figure prominently in the WSIS+10 High-Level Review outcome document adopted on 16 December 2015 at the United Nations General Assembly.
The outcome document recognizes that “the same rights that people have offline must also be protected online”; “call[s] on States to take all appropriate measures necessary to ensure the right to freedom of opinion”; affirms the “commitment to bridging digital and knowledge divides”; and the ambition “to move beyond ‘information societies’ to ‘knowledge societies’, in which information is not only created and disseminated, but put to the benefit of human development.” Many other UNESCO facilitated themes are also addressed, including: the protection of journalists; ICT and education; cultural diversity; sciences; access to information and knowledge; people with disabilities; multilingualism; indigenous peoples; local content; media and information literacy; capacity building; and ethics.

The objective of the second phase was to put Geneva's Plan of Action into motion as well as to find solutions and reach agreements in the fields of Internet governance, financing mechanisms, and follow-up and implementation of the Geneva and Tunis documents.

Nearly 50 Heads of state/government and Vice-Presidents and 197 Ministers, Vice Ministers and Deputy Ministers from 174 countries as well as high-level representatives from international organizations, private sector, and civil society attended the Tunis Phase of WSIS and gave political support to the Tunis Commitment and Tunis Agenda for the Information Society that were adopted on 18 November 2005. More than 19,000 participants from 174 countries attended the Summit and related events.

The objective of the first phase was to develop and foster a clear statement of political will and take concrete steps to establish the foundations for an Information Society for all, reflecting all the different interests at stake.

Nearly 50 Heads of state/government and Vice-Presidents, 82 Ministers, and 26 Vice-Ministers from 175 countries as well as high-level representatives from international organizations, private sector, and civil society attended the Geneva Phase of WSIS and gave political support to the Geneva Declaration of Principles and Geneva Plan of Action that were adopted on 12 December 2003. More than 11,000 participants from 175 countries attended the Summit and related events.

What is UNESCO's role in the WSIS?

Agenda 2030 is innovative in recognising the growing importance of science and technology for furthering development. Paragraph 15 of Transforming Our World: the 2030 Agenda for Sustainable Development specifically mentions and acknowledges the potential of Information and Communication Technologies (ICTs) for development:

"The spread of information and communications technology and global interconnectedness has great potential to accelerate human progress, to bridge the digital divide and to develop knowledge societies"

ICTs have an important and valuable role to play in sustainable development. The implementation of WSIS Action Lines, which are organised thematically along areas of activity in which ICTs are harnessed for development, will therefore contribute directly to achieving the SDGs.

The Geneva Plan of Action, which was agreed at the first WSIS Summit in 2003, identified eighteen areas of activity in which governments, civil society entities, businesses and international organizations could work together to achieve the potential of ICTs for development.

UNESCO is responsible for six of Action Lines as listed below:

As a coordinator, UNESCO co-organizes with ITU, UNDP and UNCTAD an annual multistakeholder event called the “WSIS Forum”, which is built on the Action Line facilitators consultation meetings. This event provides excellent networking opportunities, facilitates communication among the Stakeholders and therefore efficiently contribute to the advancement of the WSIS outcomes implementation.

www.wsis-community.org - The WSIS KC is an online collaborative platform open to all and hosted by UNESCO with 7500 members discussing and exchanging information and ideas. The objective is to facilitate information gathering and exchange, and to stimulate the common development of ideas and projects in the area of Information and Communication Technologies (ICTs) for development.. 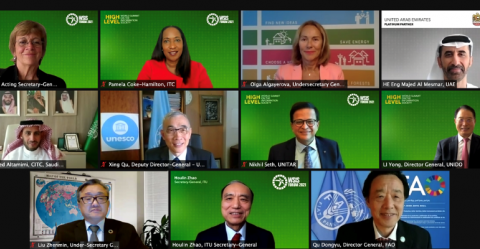 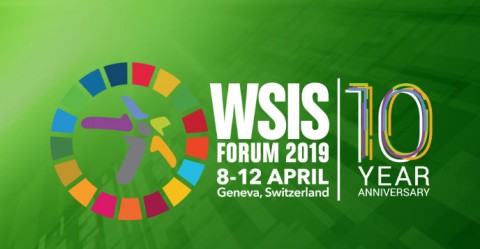 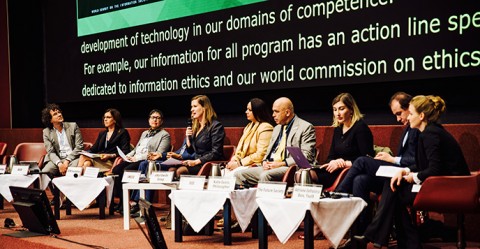 Reports and conclusions of the thematic meetings organized by UNESCO in preparation of the second meeting of the World Summit on the Information Society (WSIS)
END_OF_DOCUMENT_TOKEN_TO_BE_REPLACED
Links:
Internet Universality Indicators