Located in the semi-arid Chaco sub-region, the Biosphere Reserve presents a high level of natural environmental heterogeneity, determining a complex mosaic of ecological systems representative of the region of dry tropical forests. Within this general framework, the reserve is located in the Chaco region with continental type climate with average to low rainfall concentrated in spring and summer; and mild winters and warm summers.

The Biosphere Reserve belongs to the Chaco biogeographical region with tropical dry or deciduous forests, particularly ‘quebrachal’ dominated by Aspidosperma quebracho-blanco and Schinopsis lorentzii in the valleys, matorral scrublands and forests with matorral, flooded matorral, flooded savannas, agricultural systems and grazing forests. Wetlands are also present, located mostly along rivers, providing a refuge for a wide range of species including migratory birds.

The environment to be protected is representative of the woody ecosystems of the semi-arid Chaco, which until now was weakly represented among protected areas in South America. The environmental heterogeneity includes from abrasive pasture (aíbales-espartillales) to hardwood forests (quebrachales) and is a site that collaborates in the protection of endangered species, such as the tatú carreta (Priodontes maximus). 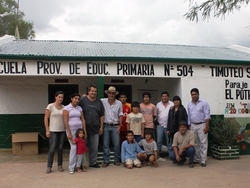 Approximately 75 to 80% of the Reserve's area is covered by forests in different degrees of exploitation. For the poor communities of this region, forest resources can become one of the basic components of development, tending towards the integrated management of natural resources based on economic growth, social equity and care for the environment. Human intervention has originated modifications in the described ecological systems, sometimes severe and others not. Basically this intervention is represented by three productive activities that are: agriculture, livestock and forestry.

Tourism to the natural areas is constantly increasing, and in order to interest the visiting tourists, in agreement with the entity of the APN and the Province of Formosa, through the Ministry of Production and Environment, collaborated in the implementation of "Interpretation Trails" in the zone of the BR, with improvement of the accesses and indicative signs, to facilitate the knowledge and awareness of the visitors.