Located in the southern part of the Río de la Plata estuary in Argentina, the Parque Costero del Sur Biosphere Reserve is a swampy region that comprises pampa grasslands, swamps, as well as wetlands and dry forests.

More than 200 bird species find refuge and food in the tala forests of the region, which is also home to mountain cats and ocelots. It is quite representative of the Pampas, fertile lowlands that cover several regions of Argentina, Uruguay and Brazil.

Tourism and livestock production are the most important economic activities. 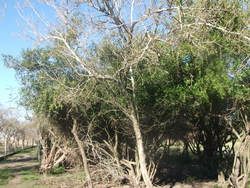 The biosphere reserve is located in the transition zone between two geosystems - the river and the pampas. It features a great diversity of ecological niches (fauna populations).

Due to its fertile soil, most of Pampas has been degraded by agriculture, making the Biosphere Reserve one of the last original and preserved areas. It has different kinds of terrains, like grasslands, flooded and unflooded swamps, as well as wetlands and forests, which is home for the marsh deer (Blastocerus dichotomus), currently considered vulnerable by the International Union for Conservation of Nature.

On the other hand, the tala (Celtis australis) forests are an important resting and feeding place for migrating and local birds. Its biological importance lies in the fact that the Celtis ehrenbergiana is not its only component, but is accompanied by a great variety of other tree, shrub, climbing and grass species, which serve as a shelter for mammals, birds, reptiles, amphibians and insects. 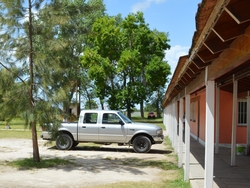 The towns of Punta Indio, Atalaya and Madalena are located within the Biosphere Reserve’s limits, with an altogether population of about 26,000 inhabitants. However, it receives a considerable influx of tourists on weekends and during the high season (around December).

Besides tourism, the region’s economy revolves around livestock production, which has an impact on the environment. The Biosphere Reserve has been promoting the production of natural grassland meat to mitigate these impacts, as well as other protocols for sustainable farming, beekeeping, and others.