Montes Azules is located in the Selva Lacadona region in the state of Chiapas in southeast Mexico, between the Lacantum and Locania Rivers. It comprises 331,200 hectares inside the area of forestry protection (1978) of the Lacandona Forest. It is one of the largest humid tropical forests in Mexico and Central America, with areas of pine forest in higher altitudes and mountain rainforest. 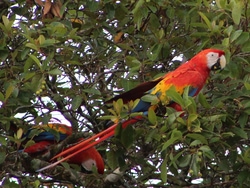 The Biosphere Reserve is the northernmost distribution boundary for a great number of biota proceeding from the Pleistocene refuges of Polochic in Guatemala and Chiriqui in Panama. The area contains the greatest amount of biodiversity in Neotropical Mexico: it covers 16% of the national territory and includes 20% of the country’s plant diversity, with approximately 4,300 species; 25% of the bird species, with 345 species and 27% of the mammals, with 114 species. In terms of invertebrates, for butterflies alone its 800 daytime species represent 44% of the total for Mexico.

It reserve contains some 500 species of trees. In the past, the forest has been exploited for chicle and mahogany, but has not been substantially altered. Authorities recognize that wood clearing, as well as fires, though, is a serious threat, once it can destroy the habitats of the hundreds of species of the region.

In the area, there are over 390 bird species (almost 50% of all known species in Mexico), 116 mammal species and other reptiles, such as the Northern tamandua (Tamandua mexicana), the Morelet’s crocodile (Crocodylus moreletii) and the currently vulnerable white-lipped peccary (Tayassu pecari).

Over 75,000 people (2002) live in the reserve, and they are mainly engaged in local agriculture, especially in the production of coffee and cattle farming. In the buffer zone, foresting and tourism also contribute for the local economy.

The latter benefits with tours to the Bonampak and the Yaxchilan archeological sites and fosters artisan activities, like the production of clothes, fabrics and sculptures with tropical woods. The tourism industry is also responsible for the creation of new jobs in the service sector, like small hotels, campsites, kayak and hiking trips and tours, among others.