The Atlantic rain forest is one of the seven moist forest areas of the Neotropics and the second largest after the Amazonian rain forest, It covers around 90 000 km.², along 3 000 km of the Atlantic Coast, covering 17 different Brazilian states. Although the remaining Atlantic forest (some 10% of the original vegetation) is rather homogeneous, the social diversity is very high as it includes large urban centers (Rio de Janeiro, Florianópolis, São Paulo, etc.) and also many small traditional communities of peasants, small-scale fishermen and forest extractive groups. 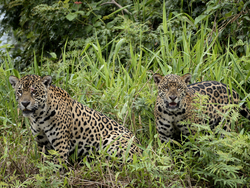 The remnants of Atlantic Forest are associated with relevant secondary forests, this forming an unique ecosystem stretching along a distance of more than 3,000 km parallel to the coast, comprising Serra Mantiqueira, Serra Geral and Serra do Mar. These very rare Atlantic Forest remnants and associated ecosystems such as mangroves, salt marsh scrublands as well as sand spits and upland grasslands are under pressure from the highest populated areas in the country.

The Mata Atlântica Biopshere Reserve is a biodiversity hotspot. Estimates say that 55% of tree species and 39% of mammal species are endemic to this region. It is home to 15% of Brazilian primates, including the golden lion tamarin (Leontopithecus rosalia), and also jaguars (Panthera onca) 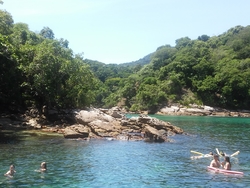 Almost 100 million people (2002) live in the urban and industrial areas of 3,000 out of the 5,507 municipalities within this Biosphere Reserve, which account to 60% of the Brazilian population.

The Mata Atlântica gathers the majority of the Universities and research centers and researchers in Brazil. Therefore, the RBMA focuses its efforts in the systematization and diffusion of scientific information that contribute to the conservation and sustainable use of the Forest. Likewise, it promotes the rescue and appreciation of the knowledge of the traditional populations on the handling of species and that are a fundamental part of our culture and the sustainable development of the Biome.