The Biosphere Reserve and its surrounding areas are characterized by a great diversity of habitats in a relatively small area, most of which are representative of the Pampas plains. 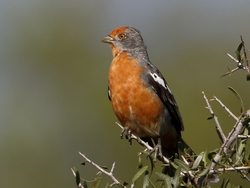 The Mar Chiquita Biosphere Reserve and surrounding areas constitute an area of faunal interest since, from a biogeographical point of view, it is located in a transition area between the Subtropical Zone or Domain and the Patagonian Zone or Domain, and on the other hand, because of the presence of estuary environments and a coastal lagoon, which make the area a unique biotope. The environmental heterogeneity of the zone is reflected in the diversity of fauna present in the area.

The most representative habitat, besides the lagoon, is the grassland (spartillards, dung heaps, cuttings and psamophytic vegetation). It should be noted in relation to the biological diversity of grasslands, that these environments have been identified as the type of ecosystem that will experience the greatest proportion of change globally, as a result of changes in land use and climate change, among others.

The biosphere reserve has been declared a Valuable Rangeland Area for Argentina by the consensus of experts in the country within the framework of the Rangeland Program of the Argentine Wildlife Foundation. The BR has also been declared an Important Bird Conservation Area (AICA), through the AICAs program coordinated by Aves Argentinas and within the framework of an international project coordinated by Birdlife International. The latter designation involves the entire reserve, not just the grasslands, and is based on the fact that the BR is inhabited by a group of globally threatened bird species. 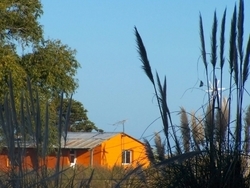 The settlements where the stable population lives in the reserve correspond to the urban area, the rural establishments and the fishing recreation areas. People also live temporarily in the CELPA base and the provincial park guard post.

Mar Chiquita is a small seaside village made up of family groups. Its stable population carries out its economic activities mainly in the area of two types of services: 1) Those associated with the community: municipal employees, administrative employees, members and employees of the Development Society, employees of the Electric Cooperative. 2) Those associated with tourism: hotels, gastronomy, shops in general. Agricultural, livestock and tourist activity.

Estancias ARSA and Estancia San Gabriel, are composed of groups family members with generational roots who carry out traditional livestock farming and to a lesser extent agriculture.