With altitudes that can reach almost 6,000 meters above sea level, the Laguna Blanca Biosphere Reserve features a typical arid Andean landscape, with a saline lake in a main depression and surrounding rocky formations. It is located in the province of Catamarca, in the northwest of Argentina.

Its creation in 1979 aimed at the conservation of the vicuña, back then endangered due to poaching. This goal led to the elaboration of sustainable handling strategies, like reviving the so-called Chaku – an ancient Inka practice of capturing, shearing and releasing the vicuñas.

In Laguna Blanca’s transition areas, there are around 600 inhabitants – mostly public servants or workers of the rather incipient tourism industry. 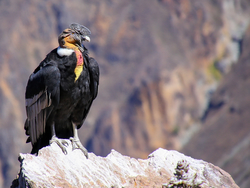 The Laguna Blanca Biosphere Reserve is located in the north of the Belén Department and in the southeast of the Antofagasta de la Sierra Department, in the province of Catamarca. It is biogeographically located in the Puna and High Andes Ecoregion, between 3000 in the depression south of the reserve and 5912 meters above sea level in the Cerro Galan. The climate is cold, dry and windy, with scarce seasonal rainfall, less than 250 mm per year.

It has tectonic origin, surrounded by mountain ranges (3200 masl - 5500 masl) whose predominant direction is N-S, with the lower areas occupied by lagoons, Laguna Blanca being the largest (approximately 3450 ha).

This area is located in the Puneñas and Altoandinas ecoregions (Perea, 2006). The vegetation consists of shrubby and grassy steppes with low vegetation cover and patches of bare soil. In sectors associated with wetlands, such as lagoons and streams, are the plains or bofedales, with vegetation dominated by grasses such as Festuca scirpifolia (chillaua) and Cortaderia sp. (white grass), cyperaceae such as Scirpus atacamensis, and reeds such as Juncus depauperatus, which completely cover the soil, constituting a privileged habitat for being sites where there is a high concentration of biodiversity. In the rocky areas there are interesting species of cactus of the genera Denmoza, Maihueniopsis, Lobivia and Opuntia.

It presents a diversity of environments, and a rich and varied biodiversity. Among the characteristic fauna species are mammals such as Vicugna vicugna, among others. 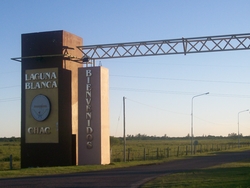 Within the Reserve there are four population groups, all in the Belén Department, which total about 600 people: Laguna Blanca, Corral Blanco, Aguas Calientes and La Angostura. There are also areas with scattered housing, such as La Puerta de Laguna Blanca, La Hoyada, Río Río, Ciénaga Redonda, etc. Most of them are dedicated to raising livestock, such as sheep, goats and llamas. They also work on handicrafts with wool and fibers from the shearing of cattle, and small-scale agriculture for self-consumption.

Tourism, although still incipient, is an activity that holds great potential for the future of the lagunistas, and in recent years there has been an interesting advance in the provision of basic services and tourist infrastructure. Local administration has been developing several strategies to increase tourism, including the promotion of ancient Inka rituals, like Chaku and Pachamama. It has also created special tours, such as visits to the lagoon, bird-watching routes, and others.