The Delta del Orinoco Biosphere Reserve (DOBR) was created by Decree N؛ 1.633 of 05-06-1991 (Official Gazette N؛ 34.812 of 3-10-1991) and encompass 1.125.000 ha including the protected areas, the buffer and transition areas, which represents circa 31% of Delta Amacuro State total surface. A great biological diversity characterizes the terrestrial and aquatic ecosystems of the Delta del Orinoco.  These ecosystems comprise a variable vegetation with more than 2.000  plants and a  very rich terrestrial and aquatic fauna integrated for more than 151 mammals species, 464 bird species, 76 reptiles, 39 amphibians and 210 ichthyology species. Considerable amounts of terrestrial and aquatic invertebrates inhabit this territory.

The Delta del Orinoco is a highly dynamic and complex fluvial-marine sedimentary basin formed in the Holocene, whose sediments deposited substantially by the Orinoco River main flow and in a lesser degree by geomorphologic units surrounding it, including San Juan River flows and other currents  draining from the plains of La Mesa. It is embedded in a mosaic of mangroves, swamp forest, moist forest, plains and aquatic ecosystem of shallow waters.  A series of fluvial channels and tide channels, the last one in the coastal plain divide the vegetation.

Besides common species in the region, like the Carina moschata, the Biosphere Reserve is also home to various endemic species, such as Dasyprocta guamara, Picummus nigropunctatus, Dendrocincla fuliginosa deltana and Anolis deltae. 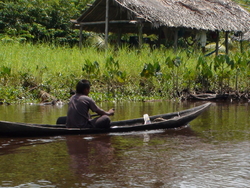 Most part of the population and indigenous warao settlements are located and spread in the eastern Delta, conforming most of the population of the sector (approximately 20.000 warao inhabitants). Primary use of this territory is fishing, hunting, harvesting of forestry produce and others that serve as base for handicraft manufacture and agriculture.

The Delta del Orinoco has geopolitical relevance because is the country’s entrance to the Atlantic Ocean, because it facilitates communications with the Caribbean Sea and its extraordinary navigation potential, the development of hydrocarbon resources industry and fishing; all important elements for territorial planning programs.