Located at the south-eastern tip of the State of Quintana Roo in Mexico's Yucatan Peninsula, Banco Chinchorro Biosphere Reserve encompasses within over 144,866 ha a mosaic of open water, sea grass beds, mangroves, sand beaches and coral reefs that is considered one of the most outstanding marine sites in the region. Banco Chinchorro is the biggest platform type reef complex system in Mexico and because of its isolated position, it represents well-preserved natural ecosystems. 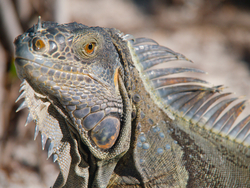 Corals characterize the area and form a circular strip made up of coral islets, which constitute the morphological structure of Banco Chinchorro. Due to this coral topography and the irregular submarine topography and orientation, a great diversity of habitats co-exist. Some 95 coral species have been inventoried.

Only 0.4% of the core area of the biosphere reserve is terrestrial and is strongly influenced by the sea. The saline substratum allows only the growth of halophyte or coastal dune vegetation and mangroves. The buffer area comprises the large area of the coral circular strip and a large marine zone to a depth of 60 meters.

Seagrass beds are abundant in the Cayo Norte zone and in the interior lagoon of Cayo Centro, serving as reproduction and breeding refuges of way ecologically and economically important species. In this latter category, the two main species of importance are found: the Caribbean lobster (Panulirus argus) and the conch (Strombus gigas). There are three coral systems: Coyo Norte, Cayo Centro and Cayo Lobos, which form the three core areas. 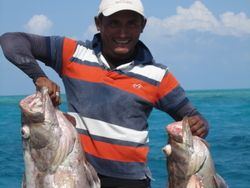 The transition area encompasses the fishing village gathering the 90 inhabitants of the Biosphere Reserve along the mainland coast. In order to minimize the effects of tourism and fishing activities, the local communities were fully consulted during the implementation of the management policy. They are involved and participate in the administration of the biosphere reserve through the Consejo Asesor of the Biosphere Reserve, which is made up of representatives of the different interested parties.