Located 140 km off the coast of Mexico, the Arrecife Alacranes forms the largest coral structure of the Gulf of Mexico, built by the calcification of overlapping colonies of various coral species for thousands of years. It has has high biodiversity and great potential for fishing.

The Arrecife Alacranes Biosphere Reserve contains the five main vegetated islands of Isla Pérez, Isla Desertora, Isla Pájaros, Isla Chica, and Isla Exterrada. Isla Pérez is the only inhabited one. The dynamic of tides and storms has granted the area an important cultural heritage due to its stranded boats, lighthouses and buildings, some of which are historical monuments. 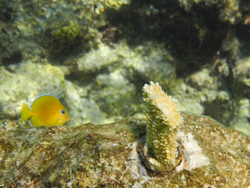 The Biosphere Reserve comprises five sandy islands with sand dunes and mangroves. Most of the reef has been built by the calcification of overlapping colonies of various species of corals for thousands of years. The dynamic rise of the islands and their constant change due to storms and tides contributes to the dynamics of the vegetation distribution and cover.

These landscapes are important nesting places for various bird species, including the endangered sharo-shinned hawk (Accipiter striatus), the peregrine falcon (Falco peregrinus) and the piping plover (Charadrius melodus).  Thirty-four coral species can be found on the reefs. 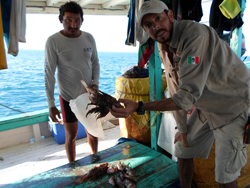 Tourism is one of the main economic activities of the Biosphere Reserve. Scuba diving is the area’s main attraction.

The site is also of great importance for the coastal communities as a source of food and marine products for local, national and international trade. Although fishing activities have had negative impacts in the ecosystems, several initiatives to implement sustainable techniques and to add value to lobster fishing have been implemented in order to tackle this problem and promote development to the local population.