The biosphere reserve comprises the ‘Pinacate’ area, the ‘Gran Desierto del Altar’ and the ‘Bahía of Adair’ in the Gulf of California’s border. It is located in the Sonora State in the extreme northeastern Mexico. Geological volcanic formations with craters, dunes, oasis and beaches, and the diversity of plants associations determine its special landscape.

In the transition and buffer areas, 129,516 (1990) inhabitants live in ‘ejidos’ or communal properties, mainly engaged in agriculture, forestry, mineral extractions and cattle raising located mainly in the coastal areas. One of the most important economic activities in the transition areas is the existence of international enterprises ‘maquiladoras’, in San Rio Colorado, which engage 5,880 people living in the urban villages. The same economic model is to be implemented in Sonoyta’s village as an ‘Industrial Park’. 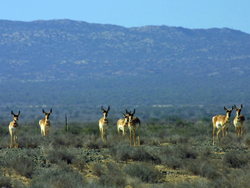 The variety of species in the zone ranges from marine through coastal to land species. Located in the coastal zone are flats, beaches and dune systems, granite sierras and the volcanic shield communities. The land fauna of the reserve is diverse, due to the varied mosaic of its vegetation, ranging from that associated with wetland areas to more inhospitable sites found in the sandy areas of the Great Desert. The Colorado River is the main habitat for the Hog fish (Lachnolaimus maximus).

This location is one of the few places in North America where the Fringe-toed Lizard (Uma inornata) is distributed, in addition to being the western limit for the distribution of the Gila Monster (Heloderma suspectum). Among the reptiles, the Diamond Rattlesnake, the Coral Snake, the Chameleon and the Desert Tortoise are worth mentioning. Birdlife is well represented with at least 80 species of land and aquatic birds, both resident and migratory, characterizing the area with high diversity.

The land mammals are mainly representative of the Sonora and San Bernardina biotic provinces: White-tailed Deer, Mule Deer (Odocoileus hemionus) Big-horned Sheep (ovis canadensis cremnobates), the Pronghorn (Antilocapra americana), the Javelina, and the Long-nosed Bat, among others. Species of vegetation include the Saguaro cactus, the Strawberry Hedgehog Cactus (Echinocereus engelmannii), the Thorny Biznaga cactus, the Mexican Palo Verde (Parkinsonia aculeata), and the Ironwood tree, among many others. The marine species include the Porpoise or Vaquita (Phocoena sinu)s, protected by Mexican law as an endangered species, the Totoaba and the Yuma Clapper Rail. 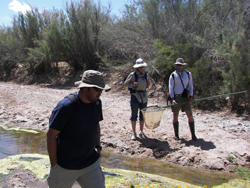 The main economic activities of the population living in the Biosphere Reserve's buffer zone are related to animal husbandry, agriculture, mining, fishing, and tourism.

In the core areas, very few activities are allowed and must be monitored, such as research and low-impact tourism. In the transition areas, agriculture is the main activity. Measures have been taken to dimish its impact over the environment, like keeping the livestock stabled and controling exoctic plants.

The number of tourists has grown steadily over the past decade, including from US neighboring states, who come for hiking, sport fishing, sandboarding and hunting.