The Wadden Sea along the coastline of the North Sea is one of Germany’s few remaining large-scale natural landscapes. It is protected as a national park whose global uniqueness has been recognized through the additional designation as UNESCO World Natural Heritage Site. The tidal flats and creeks, salt marshes and sand banks are largely preserved in their original state. The Wadden Sea is the area in Europe with the highest numbers of birds. Three UNESCO Biosphere Reserves encompass the entire German Wadden Sea (in Hamburg, Lower Saxony and Schleswig-Holstein). In 2016 they established a cooperation agreement to pave the way towards one unified Biosphere Reserve. The Wadden Sea along the coast of the federal state Schleswig-Holstein is one of the largest National Park in Europe and was designated as a UNESCO Biosphere Reserve already in 1990, with an extension to cover the Hallig islands, five small inhabited islands without protective dikes. 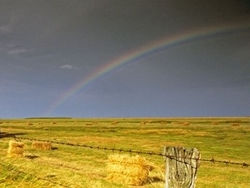 The Wadden Sea is a wetland which consists mainly of tidal mud flats and tidal creeks as well as salt marshes and sand banks. Only specialized species live in this extreme habitat exposed to the dynamics of the tides, but these occur in large numbers, including marine mammals such as harbour seals, gray seals and harbour porpoise. The Wadden Sea is also an important feeding area for migrating birds and a breeding and wintering site for over two million birds per year. The Biosphere Reserve includes an EU Important Bird Area and an EU Flora Fauna Habitat Area in its core zone. The International Maritime Organization has designated this part of the Biosphere Reserve a Particularly Sensitive Sea Area (PSSA) and the Ramsar Convention grants it the status of Wetlands of International Importance. The UNESCO World Heritage status was achieved in 2009.

The Hallig islands or Halligen are a unique phenomenon. These are ten small permanent islands formed of peat and mud, only a few with protective summer dikes. The five Halligen Gröde, Hooge, Langeneß, Nordstrandischmoor and Oland are part of the Biosphere Reserve since 2005 and represent its transition areas. The others are already in the national park and Biosphere Reserve and part of the core areas. 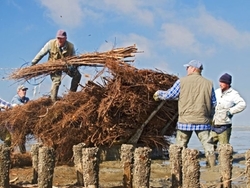 The small population of the Biosphere Reserve (approximately 360 people) lives on the 5 Hallig islands, in the transition zone. They face special challenges due to limited space for economic activities, difficult traffic connections as well as the natural conditions, with frequent and heavy storms and flooding – and rising sea levels.

A key goal thus is to reconcile the pressures of a very popular tourist destination with the conservation and sustainable development of the Wadden Sea. The management of the Biosphere Reserve offers tourist attractions such as guided walks on the mud flats at low tide. In order to raise awareness for nature conservation, the “Brent Goose Days” are celebrated each year since 1997.  As a result of the varied activities, not only bird watchers found the way to the Hallig islands. In order to foster a sustainable lifestyle in the Biosphere Reserve, the Hallig islands’ population adopted a “Sustainability policy paper” in 2010.