The Polana Biosphere Reserve is situated in central Slovakia within the Western Carpathians Mountains. It represents a mountain landscape with a diverse topography, reflecting a complex geologic history of volcanic activity, faulting and erosion. Nearly 85% of Polana is covered by mainly coniferous forests. The vegetation of Polana is characterized by a common occurrence of both thermophilous and mountain plant species. This reflects the changes in elevation, alternating rock and soil types, influence of the slope aspect and the region’s outlying position south of the main West Carpathians arc. 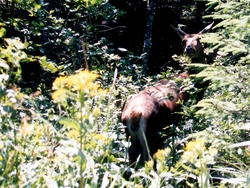 Polana is one of the greatest European former volcanoes (cca 2500 m above sea level) and it is the highest volcanic mountain range in Slovakia. The highest altitude is 1458 mabove sea level, the lowest one is 460 m above sea level. Polana BR is characterized by a common occurrence of both, thermophilous and mountain plant species. Forest covers almost 85% of the Polana BR, with the slight majority being coniferous forests, the rest being deciduous one.

Many of them have a character of primeval forest. The forest system is very diverse from oak forests to spruce forests growing on andesites, well known for their southern most occurrence within the Western Carpathians, cover the highest part of the mountain range. There are about 1220 species of higher plants in the area and it is also rich in lichens and mosses. Out of which 80 species are in categories of protection, threat and rareness. The variety and species-richness of the fauna in the Polana BR reflect its environmental diversity.

There are many biogeographically outstanding and biosociologically significant animal species, whose rare populations are often endangered and thus strictly protected. The invertebrate fauna includes several Carpathian endemic species. Particularly species rich is the fauna of beetles, butterflies, reptiles, birds as well as large predators including wolf (Canis lupus) Eurasian brown bear (Ursus arctos arctos) and lynx (Lynx lynx) . The avifauna is exceptionally rich. There are 174 species of birds in the area. In consideration of occurrence of endangered and rare bird species, the Polana has been recognised as Important Birds Area of Slovakia. 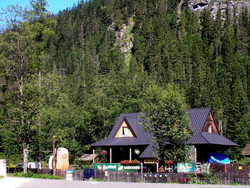 Even today, the area is sparsely inhabited, with only three settlements, one recreation centre, several farm- and forest houses. Most of the 400 permanent inhabitants are retired, and those employed commute to industrial enterprises outside the region, only a few work in forestry or agriculture.

Most of the region is covered by woodland, the rest being agricultural land, except for 50 ha of water reservoir. Forest management is according to decade plans which include most of the demands of nature conservation. Mountain meadows and pastures are mown and used for grazing by cattle and sheep.