This biosphere reserve comprises the Ordesa and Monte Perdido National Park ( 18% nucleus zone) and the Viñamala Hunting Reserve. It consists of the Ordesa Valley, a canyon with vertical walls, being the result of successive glaciations during the Quaternary period, and the valley of the Arazas River, confluent with the Ara River, with a large number of waterfalls.

Located in the central area of the Pyrenees, it is one of the best representations of mountain ecosystems linked to erosion and glacier formations and is home to unique species of flora and fauna within the regional and international context, many of them with some degree of threat, whose conservation is essential for the maintenance of biological diversity. Especially in its core area, the Ordesa y Monte Perdido National Park. 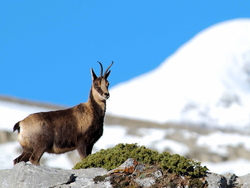 The Biosphere Reserve includes Pyrenean valleys and siliceous (Northwest) and limestone (South and East) mountains, with peaks reaching 3,355 m (Monte Perdido). Landforms have been modelled by glaciations forming deep valleys with a U profile, circuses and lakes excavated by the ice (locally known as ibones). The limestone massifs also contain labyrinths of caves and galleries opened up by the water (Karst) the most famous being the sinkholes of the Escuaín canyon, considered to be among the deepest in Europe.

The climate is variable in function of the altitude and orientation, oscillating between the continental sub- Mediterranean zones in the lower parts and Boreal-Alpine climate in the highlands. The vegetation is distributed in altitudinal layers ranging from Oak groves to mosses and lichens in the highest areas near the perpetual snows. The intermediary layers are covered with a succession of Oak, Beech, Fir and European Black Pine, mixed with Birch, European Yew, Aspen, Ash and Willow trees. Plant diversity is very high and over 2,000 species have been recorded.

Among the fauna, species of high value such as the Bearded Vulture, the Sarrius, the Pyrenean Frog, the Pyrenean Desman, the Snowy Partridge, the Capercaillie or the Black Woodpecker stand out. 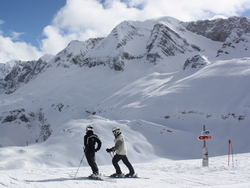 The Biosphere Reserve's limits were originally established in a way it didn't include populated areas, with the exception of two touristic areas. In the outskirts, the economy is based on tourism, especially winter sports-related tourism. Every year the Biosphere Reserve welcomes nearly a million visitors.

For centuries, extensive mountain livestock farming linked to the use of the pastures was the main economic activity of the Biosphere Reserve, and today the livestock population, especially cattle and sheep, is still very important. It is essential for the maintenance of the landscapes and traditional activities.

This livestock is complemented by a very important tourist sector that has become the main economic resource of the Reserve for years. More than one and a half million visitors a year are attracted by the possibility of enjoying multiple activities in nature such as the National Park, hiking, skiing and other winter sports, mountain biking, adventure sports, photography of flora and fauna, etc. And all this complemented by a rich cultural and gastronomic heritage, Romanesque churches, festivals, millenary pilgrimages, carnivals, etc, make this place a sustainable tourist destination of the first order.