Nordhordland Biosphere Reserve is centrally located on the coast of western Norway and comprises the coastal landscape between Bergen and Sognefjorden. It stretches from the Atlantic Ocean in the west, covers the outer coastal archipelago, through hundreds of fjords and inlets and ends in the mountains 1300 m above the sea level in the east. Water is a central theme for the biosphere reserve because water has been important for shaping the natural features of the region, and because people in the region have always utilised the lakes, the rivers, the fjords and the open ocean for hunting and fishing, and for transport. But Nordhordland is also vital for the Norwegian economy with large resources of hydroelectric power, and vast quantities of oil and gas which are extracted from the seabed off the coast. 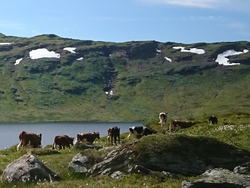 The Biosphere Reserve is characterised by a high diversity of ecosystems with their associated flora and fauna. At its western edge is the open archipelago which protects the mainland from the open sea. The ecosystems here are characterised by the deep ocean linked to the Norwegian Trench and the Norwegian Continental Shelf. The sea has clean, clear, Atlantic water with a high salt content. In the ocean depths are deep-water corals and, further in, large kelp forests. In addition to Lindåsosane – a system of small, shallow fjords – three major fjords stand out: the national salmon fjords of the island of Osterøy, Masfjorden, and Lurefjorden. The freshwater systems are characterised by a high diversity in the river systems flowing from the mountains to the fjords. These ecosystems are largely dependent upon nutrients and organic material transported from the land by runoff and wind. The water quality and the biological processes in the water are therefore strongly influenced by the bedrock, biological processes, and human activity in the catchment basin. These river systems are especially important in regional and global contexts as spawning areas for Atlantic salmon. 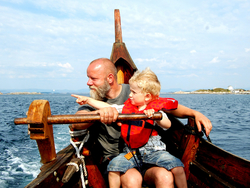 Nordhordland has a wide variety of typical Norwegian businesses and industry and represents a good cross-section of the Norwegian population with regard to employment and housing. It has large resources of hydroelectric power, and vast quantities of oil and gas are extracted from the seabed off the coast. The region also holds a central position in the very important aquaculture industry.

Nordhordland is located between two of the prime tourist attractions in Norway, the Hardangerfjord and the Sognefjord, and is near the tourist city of Bergen which has close to 2 million overnight stays and is visited by some half a million cruise ship tourists each year. Yet Nordhordland has very little tourism. The potential, however, is significant both for capitalizing on those who often visit the region, primarily using huts and cabins, and by increasing the number of new, visitors both from Norway and from other countries.