This biosphere reserve is situated on the eastern part of the Greece mainland and covers the eastern limestone foothills and the summit of Mount Olympus (2,914 metres above sea level). The landscape comprises maquis and Mediterranean sclerophyll shrublands, beech and oak woodlands, pine (Pinus nigra) forests, as well as montane grasslands and alpine areas.

The biosphere reserve is managed as a national park and hence there are no settlements within the area. As with almost all areas in the Mediterranean, this area was subject to heavy grazing and timber extraction in the past. Today, local communities use the buffer zone of the biosphere reserve for grazing, hunting, gathering of herbs and wood extraction. However, tourism is the main economic activity in the reserve. Many tourists as well national as foreign visit this centre of Greek mythology as, according to Homer, the twelve Greek gods have their palaces on Mount Olympus. 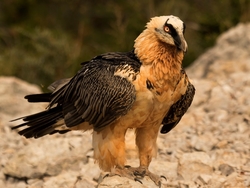 The region of the park is mountainous with Mount Olympus – the highest mountain in Greece – standing out from the surrounding area. In the north and east, alluvial plains ascend gradually to an altitude of around 300 metres, and from there the foothills of the mountain rise steeply. Deep valleys, especially in the east and north, dissect the massif.

The reserve consists of coniferous woodlands and forests between 500 m and 1,700 m. The main type of vegetation is black pine (Pinus nigra). Meadows and montane levels of several kinds occur in places where the forest has been removed. A Mediterranean Maquis shrubland covers the foothills of Mount Olympus.

One hundred and four species of birds, including seven species of woodpeckers, and 32 species of mammals have been observed in the different ecosystems of the biosphere reserve. Several animal species are endangered or threatened with extinction, including the Geoffroy’s bat (Myotis emarginatus), the chamois (Rupicapra rupicapra), the bearded vulture (Gypaetus barbarus), and the golden eagle (Aquila chrysaetos).

The biosphere reserve is uninhabited but there are several communities living in the areas around it, such as in Dion, Litochoro, Karitsa, and Kokinopilos. Tourism and agriculture are the main economic activities around Mount Olympus.

The entire Pierian Olympus has been declared an archaeological and historical site in order to preserve its monumental and historical physiognomy. Recent archaeological finds date back to the Iron Age. Indicating that prehistoric human chose to live at the foot of this mountain. Inspired by its mystery Homer created the legends that gave birth to the Twelve Greek Gods.