The Mont-Viso Biosphere Reserve is a glacial cirque situated between the Alpine mountains and the Mediterranean. It is surrounded by river valleys and high altitude lakes and enjoys a dry and sunny climate.

Monviso encompasses a mosaic of ecosystems ranging from the arid and rocky landscape found in the high altitudes of the Monviso massive (at a maximum elevation of 3 841 m) to the unusual forest ecosystem, which hosts, among others, Pinus cembra. The Alevè forest, which follows the whole length of the Western Alps, is the most unique and intact part of the reserve, while a continuum of different riparian environments can be found along the Po River, from its springs at Pian del Re (at an elevation of 2 020 m) to the Casalgrasso municipality, and then downstream towards the Torino Province – all of which are related to the permanent presence of the water stream.

Important ecosystems can be found along the water stream and little rivers, hosting endemic species of value for conservation. Among the fauna, Salamandra lanzai, Coronella austriaca, Parnassius apollo, Callimorpha quadripunctata, Tetrao tetrix and Mustela erminea are of particular note; while Primula hirsuta, Veronica allionii and Juncus triglumis are notable examples of flora. 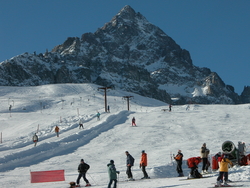 In 2009, the Mont-Viso biosphere reserve hosted nearly 24 975 inhabitants over 1 331 km². With twenty inhabitants/km², the area has a relatively low population density. Human activities specific to the culture of the territory include high-mountain agriculture, forestry and handicrafts.

The biosphere reserve receives many visitors throughout the year and tourism plays a major role in its economy. Some species of flora are also of real importance to the local economy, including medicinal and aromatic plants (e.g. arnica gentian, balm, wormwood, hyssop, buckthorn, edelweiss, blue thistle).