Located on the southwestern coast of Crete, this biosphere reserve and national park is situated in a mountainous limestone area famous for the deep narrow Samaria Gorge. The area comprises examples of high altitude Mediterranean forest (including virgin stands of Cupressus sempervirens), maquis and phrygana. The typical Mediterranean fauna include, endemic species of wild goat (Capra aegagrus cretensis). As in most parts of the Mediterranean, the area was formerly subject to grazing and timber extraction.

The area designated as biosphere reserve is currently uninhabited (1999). The region around the gorge is interesting from a cultural perspective, as it hosts ancient ruins, churches and castles. Tourism is the main economic activity in the area, however activities are restricted within the national park. There is a visitor’s centre at the entrance of the gorge. 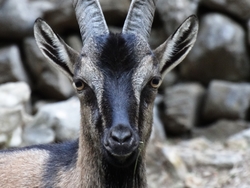 The Gorge of Samaria, located at the southern part of the Omalos plateau, dominates the area of the biosphere reserve. The gorge is a unique geological formation in the Mediterranean, and stretches about 16 km in length. Altitudes range from 0 to 2134 m above sea level. Twenty-two water springs, numerous torrents, karstic caves and, most imposingly, the steep almost vertical rocks, combine to present a highly diverse geomorphological relief. Soils are poor in quality, comprising mainly Terra rossa. 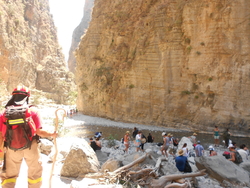 There are no apparent ethnic differences between the people living around the reserve and, the people of Lakki, Agia Roumeli, Agios Ioannis and , Anopolis, who belong to the local district of Skafia, all share a strong identity. The majority work as shepherds, a traditional livelihood, while those living near the coast work in tourism during the summer. About 70% of tourists visiting the biosphere reserve are foreigners.

Ancient ruins have been excavated at several sites within the reserve. At Agios Nikolaos, an excavation has brought to light vases and fragments of ancient relics. It is believed that these pieces come from an ancient temple of Apollo. A variety of old churches have also been found in the biosphere reserve, some of which contain inscriptions dating back to the fourteenth century.