The Fuerteventura Biosphere Reserve is located on the oldest and second largest of the Canary Islands. The western coastline stretches over 100 kilometres and is free of human intervention. Unlike the other Canary Islands, the topography of Fuerteventura is characterized by U-shaped valleys and low mountains. The highest peak is Pico de la Zarza (807 metres) located in the south of the reserve. The island also contains a rich fossil record, distributed among 50 paleontological sites of global importance. 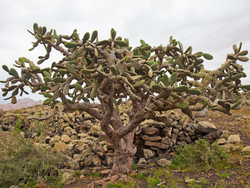 Due to the proximity of the African continent, the reserve’s climate is very arid, resulting in an almost complete lack of tree cover. However, the lack of abundant vegetation facilitates the observation of climate change impacts on the islands and efforts to understand the development of geological features. Volcanic activity can be traced back more than 20 million years with the formation of a mountain more than 3,000 metres in altitude. However, the highest mountain on the island today barely exceeds 800 metres.

The main habitat types in Fuerteventura are steppe, sea cliffs and the largest desert and semi-desert in Europe. However, despite its arid character the island hosts a significant range of biodiversity. Zygophylletum Fontanesii (genus of Zygophyllaceae family) and Tringa nebularia (Common greenshank) are the most common flora species, while other noticeable species are Olea europaea (Olive), Pistacia atlantica (Persian turpentine tree) and Pistacia lentiscus (small tree of the pistachio genus). In addition, the biosphere reserve is home to approximately 644 species of vascular plants, representing one-third of all such species found on the Canary Islands.

There are 97,859 people permanently resident in the Fuerteventura Biosphere Reserve with numbers having increased steadily since the 1970s through immigration. Moreover, up to 140,000 tourists from Germany and the United Kingdom visit the island during the summer season.

In the past, Fuerteventura produced significant amounts of grain products, leading to the island being termed the ‘breadbasket of the archipelago’. An aboriginal settlement, Poblado de La Atalayita (Antigua), is located at the foot of the hill of La Atalayita, in the valley of Black Pozo. It contains various archaeological sites, such as volcanic pipes that served as housing facilities.

Another example of a renowned archaeological site is Barranco de Tinojay (La Oliva), which features a series of engravings that represent boats. These have led archaeologists to the conclusion that the island was visited thousands of years ago by Phoenicians, Greeks, Carthaginians and Romans.

Other buildings of historical and architectural value in the biosphere reserve include windmills, churches and chapels. Of particular significance are the churches of Santo Domingo de Guzmán and Nuestra Sra. de la Candelaria and the hermitage of San Vicente Ferrer.