The Danube Delta Biosphere Reserve is a labyrinth of water and land shared between Romania and Ukraine. It is made up of countless lakes, channels and islands at the end of a 2,860 km-long river. The Danube Delta is the largest European wetland and reed bed, and also constitutes Europe’s largest water purification system. The area is particularly well known for its abundance of birdlife, with the presence of 312 important bird species, many of which use the Delta as an important stopover and breeding area. About 90 fish species are present including populations of sturgeon (Acipenser). The Delta is also one of the last refuges of the European mink (Mustela lutreola), the wildcat (Felis silvestris), the freshwater otter (Lutra lutra) and the globally threatened monk seal (Monachus monachus).

The Danube Delta is home to a rich mix of Bulgarian, Gagauz, Lipovan, Moldavan, Russian, Turkish and Ukrainian people, scattered around the delta in small villages. The main economic activities in the biosphere reserve are fishing, hunting, reed harvesting, livestock raising and subsistence agriculture, as well as tourism. 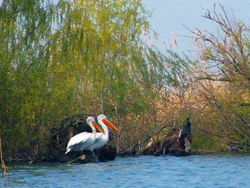 The Danube Delta is the Europe’s largest wetland and reed bed, and functions as its most important water purification system. The delta has wet soils temporarily covered with water, with plants adapted to living in wet conditions. The Danube Delta also includes fixed and mobile sand dune areas home to psamophilic plants. Grassland ecosystems are located on higher parts of riverine bars and on the edges of reef beds, adjacent to coastal bars. The water ecosystems of the reserve are very diverse, including the freshwater ecosystems of watercourses, limans and numerous lakes and bays, and brackish water ecosystems in the delta of the Kiliya Arm.

The freshwater ecosystems give the reserve a rich biodiversity: 312 bird species can be found including the glossy ibis (Plegadis falcinellus), the purple heron (Ardea purpurea), the white-tailed eagle (Haliaeetus albicilla) and the largest population of great white pelicans (Pelecanus onocrotalus) in Europe. Fish species include the starlet (Acipenser ruthenus) – a small sturgeon, the thornback ray (Raja clavata) and the spined loach (Cobitis danubialis).

Other animals living in the Danube Delta include the meadow viper (Vipera ursinii), the European mink (Mustela lutreola), the harbour porpoise (Phocoena phocoena) and the common bottlenose dolphin (Tursiops truncates). 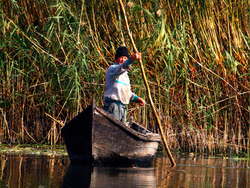 The local population generally engages in traditional occupations such as fishing, agriculture, animal husbandry, reed harvesting and tourism. Fishing is the predominant and oldest occupation. Various ethnic minorities live in the Delta, the most representative of which are the Gagauz, Lipovans, Russians, Tartars, Turks and Ukrainians,

The area is home to numerous historical, architectural and artistic monuments that lend cultural and historical interest to the localities. Ancient Roman Catholic churches are situated in Malcoci, Sulina and Tulcea.