It represents a coastal environment with small islands in the Baltic Sea. The island societies are small-scaled and the people who have lived there for generations have a close contact with the sea and the nature. The traditional livelihoods like fishing and agriculture are getting less profitable and the population has greatly decreased since the beginning of the last century.

The Centre for Economic Development, Transport and the Environment in Varsinais-Suomi (ELY-center)

The mosaic-like archipelago consists of 6500 islands (>0.5 ha) and is unique worldwide. The post-glacial land-uplift is an important factor in forming the archipelago topography and scenery. The present rate of the land-uplift is 4-5 mm/year. The bedrock in the Archipelago Sea area is a remnant of an ancient mountain chain called the Svecofennides and forms a peneplain. The bedrock consists mainly of granite, gneiss and schist. In addition, there are small local limestone occurrences. 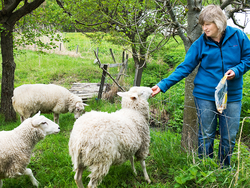 The Archipelago Sea National Park, which represents the core area of the biosphere reserve, differs in many aspects from other Finish national parks since it comprises traditional landscape with grazing and hay-cutting activities as well as fishing and hunting activities. It was established in order to protect the natural environment and culture of the Archipelago Sea, to safeguard the traditional ways of utilizing natural resources, to protect a living community and to promote environmental research and interest in nature.