Situated in the central Atlas Mountains, the Atlas Cedar Biosphere Reserve is home to 75% of the world’s majestic Atlas cedar tree population. This region is characterized by a wealth of ecosystems and the mountain peaks, which reach up to 3,700 m, provide the region with critically important water resources. Fruit plantations, modern agriculture and tourist activities have replaced semi-nomadic pastoral traditions, but are taking their toll on scarce water resources. The local Berber culture is particularly strong in this area. 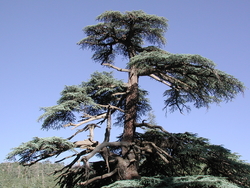 The Atlas Cedar Biosphere Reserve is home to the majestic Atlas cedar tree (Cedrus atlantica manetti) and accounts for 75% of the total global Atlas cedar tree population. In addition to the Atlas and other types of cedar, green oak (Quercus rotundifolia) and maritime pine (Pinus pinaster) occur in the forests. The high Atlas section to the south of the reserve has peaks reaching up to 3,700 m, which provide the region with critically important water resources. The main ecosystem is the Haute Moulouya plain, an arid steppe at 1,500 m.

The region is home to the last surviving examples of the Maghreb leopard (Panthera pardus panthera). Other mammals inhabiting the area include the Barbary macaque (Macaca sylvanus), the serval (Leptailurus serval), the Cuvier’s gazelle (Gazella cuvieri) and the lesser kestrel (Falco naumanni). 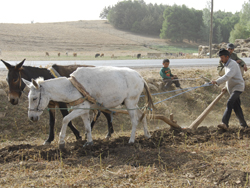 Approximately 1 million inhabitants live in the Atlas Cedar Biosphere Reserve. The local Amazigh or Berber culture constitutes the majority culture and is characterized by the remarkable preservation of language and traditions. The economy is pastoral with the use of irrigated modern agriculture in some areas.

For centuries, the region was exclusively defined by semi-nomadic pastoral traditions, characterized by extremely efficient water consumption, leaving nearly 90% of karst water resources to cover the needs of the entire country. However, fruit plantations, modern agriculture, and urban and tourist activities are taking a toll on scarce water resources.