UNESCO: Building peace in the minds of men and women 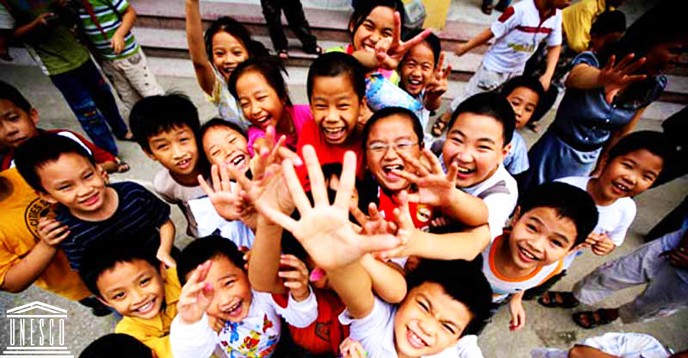 The Preamble to the Constitution of UNESCO declares that “since wars begin in the minds of men, it is in the minds of men that the defences of peace must be constructed.” In 1945, UNESCO was created in order to respond to the firm belief of nations, forged by two world wars in less than a generation that political and economic agreements are not enough to build a lasting peace. Peace must be established on the basis of humanity’s moral and intellectual solidarity.

The growth of global challenges such as inequality, exclusion, violence and sectarianism has resulted in a foreseeable social intolerance that drives humanity apart. The role of UNESCO to accomplish every day its fundamental humanist mission to support people in understanding each other and working together to build lasting peace has become a centre point in making a safer world for diversity and future generations. Be it through education, the sciences, culture, communication and information, peace is promoted in all of the Organization’s fields of work.

It was in 1989 that the concept of Culture of Peace was established at the UNESCO International Congress on “Peace in the Minds of Men” in Yamoussoukro (Côte d’Ivoire). It was at this occasion that UNESCO adopted the vision that peace is much more than the end of armed conflict.

Through learning and understanding, individuals become more interculturally competent to comprehend the richness that lays within a diverse world, resulting in tools for the ongoing construction of lasting peace, when consequently they become prepared to appreciate, rather than reject, diversity as well as to manage conflicts in accordance with the values of pluralism and mutual understanding.

With this objective in mind, UNESCO has constantly developed programmes that have the objective to teach about diversity and the comprehension of the unfamiliar, or that would enable societies to work together and promote a healthy exercise of cooperation.

Following the Congress of Yamoussoukro, UNESCO established in 1989 the Félix Houphouët-Boigny Peace Prize, which is intended to honor living individuals and active public or private bodies or institutions that have made a significant contribution to promoting, seeking, safeguarding or maintaining peace. The first laureates were Nelson Mandela, at the time President of the African National Congress and future UNESCO Goodwill Ambassador, and Frederik W. De Klerk, President of the Republic of South Africa. They were awarded in 1991 for their contribution to international peace and as a tribute to what they have done to educate their people towards an understanding and an overcoming of prejudice that many would not have thought possible even a few years earlier. Two years later, they shared the Nobel Peace Prize, a clear evidence of UNESCO’s role as a pioneer. Many of past laureates have gone on to win the prestigious Nobel Prize.

As a sign of unity and to counteract the destruction of cultural heritage and the persecution of minorities, UNESCO Director-General, Irina Bokova, launched the #Unite4Heritage campaign in March 2015, which aspires to use the power of social media to create a global movement with young people for them to raise their voice and take action for the safeguarding of heritage under threat, that must be protected as a force for mutual understanding.

Education is vital to achieving acceptance and respect for all people regardless of colour, gender, or national, ethnic or religious identity, being especially important to reach out to children and young people during their formative years through their formal education. Therefore, another project was launched in 2012: the UNESCO-USA-Brazil project “Teaching Respect for All” that aims to design a curricular framework to fight racism and promote tolerance, which countries can adapt to their respective contexts and needs.

In September 2014, the culture of peace has returned to its source in the heart of Africa. UNESCO and Côte d’Ivoire celebrated the origin of the concept that took place in Yamoussoukro twenty-five years ago and that has changed the way we understand peace. This event had the dual aim of measuring the progress made since 1989 and exploring future avenues. In this regard, UNESCO and the Government of the Republic of Angola are scheduled to co-organize a biannual Pan-African Forum for a Culture of Peace in Africa, entitled “Biennale of Luanda”, in September 2015.

As said by UNESCO’s Director-General “Peace is more than the absence of war, it is living together with our differences – of sex, race, language, religion or culture – while furthering universal respect for justice and human rights on which such coexistence depends.”

Peace is reverence for life.
Peace is the most precious possession of humanity.
Peace is more than the end of armed conflict.
Peace is a mode of behaviour.
Peace is a deep-rooted commitment to the principles of liberty, justice, equality and solidarity among all human beings.
Peace is also a harmonious partnership of humankind with the environment.
Today, on the eve of the twenty-first century, peace is within our reach.