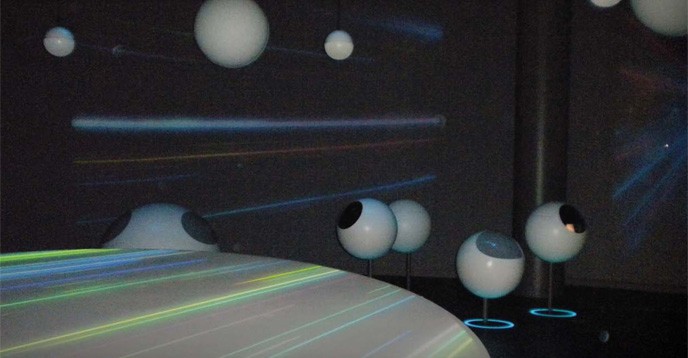 The Universe of Particles exhibition aims to help visitors to CERN understand the major issues in contemporary physics.
© UNESCO/J. Šopova

Fostering scientific cooperation, making science education more attractive, facilitating access to scientific knowledge for a fairer world – these are common objectives being pursued by UNESCO and the European Organization for Nuclear Research, better-known by its historic acronym, CERN. The two organizations have been closely linked for 60 years.

Few people today remember that the idea of creating a European Council for Nuclear Research (CERN) was mooted in 1950, in Florence (Italy), at the fifth session of the UNESCO General Conference. At that time, the world was still licking its wounds after the still recent Second World War. European intellectuals, men and women of the arts and scientists had all understood one thing – that cooperation was essential for the construction of peace. What was needed was a common project around which European researchers could join together, coming from both Allied countries and the Axis powers.

The Florence project was to enter into force three years later, with the signature of the final Convention on the creation of CERN (the ‘Council’ having metamorphosed into ‘Centre’). The Convention was ratified by 12 countries1 in 1954 and the first stone of the building was laid, just outside Geneva (Switzerland), in 1955.

Today, beneath the buildings of the European Organization for Nuclear Research, which has kept its historic acronym, is the world’s largest particle accelerator. Some 27 kilometres in circumference, the Large Hadron Collider (LHC) is a gigantic instrument, equipped with 9300 magnets.

On 30 March 2010, news coming out of CERN set the world talking – LHC had succeeded in colliding beams at close to the speed of light. “With this experiment”, says Rolf-Dieter Heuer, CERN’s Director-General, “we got to within a fraction of a second of the Big Bang. “It’s a new step forward, opening areas of research into the Creation of the universe that we could never have imagined before.”

The historical discovery of 30 March was made possible through the “Atlas Collaboration” which brings together around 3000 physicists (including 1000 students) from 40 countries, and belonging to over 170 universities and laboratories. This an entire “virtual nation”, to use an expression often heard at CERN. “Motivation – and this alone – can explain the success of this gigantic undertaking. Although we come from different regions of the world, we’re all moving in the same direction – towards knowledge,” says the Director-General. If, one day, we discover the famous Higgs boson – a hypothetical particle dubbed The Grail by physicists, because they’ve all been searching for it for half a century – it will be thanks to the Atlas. “We know everything about this particle, except whether it exists,” he says, smiling.

CERN is not alone in pursuing this quest, though. There is also Fermilab, just outside of Chicago (USA). “Today, CERN has the most powerful accelerator in the world, but until recently it was Fermilab, and they have amassed a huge quantity of data over 25 years, whereas we have just begun. LHC was only launched in September 2008. But, having said this,” confides Rolf-Dieter Heuer, “I think that, with it, we have a good chance of beating them to the discovery of the Higgs boson.” Do the two organizations collaborate? “I call it competitive collaboration or collaborative competition. Fermilab helped us a lot when the LHC went down, [shortly after it opened].” And do they exchange data? “Not for the moment. Come back in a few years and ask me that question again.”

There is no progress without competition – nor without cooperation.

“There is no progress without competition,” says Rolf-Dieter Heuer. “Nor without cooperation.” This was at the origin of the birth of CERN and remains its driving force, but it is also one of the permanent ideals of UNESCO. And one of the Organization’s recent projects is to support the Synchrotronlight for Experimental Science and Applications in the Middle East (SESAME) centre in Allan (Jordan). In terms of international scientific cooperation, SESAME is the Middle East’s equivalent of CERN. It brings together Bahrain, Cyprus, Egypt, Iran, Israel, Jordan, Pakistan, the Palestinian Authority and Turkey. “We don’t have the same fields of expertise,” explains CERN’s Director-General, “but the idea of using science for peace underlies both projects. And CERN has not shied away from helping create SESAME, especially in terms of expertise.”

In the framework of common initiatives (SESAME, virtual libraries in African universities, training teaching staff, etc.), CERN puts its expertise at the disposal of UNESCO, while UNESCO’s International Basic Sciences Programme (IBSP) offers the European Organization a framework for cooperation with researchers from countries that are not its members. Indeed, CERN has 20 Member States, but its projects include 10,000 associate experts from 85 different nationalities.

We never know when or how a result of basic science will be applied. But it always is, in the end, either directly or indirectly.

CERN also counts on UNESCO to help it promote the idea of a new approach to teaching physics and mathematics on an international scale. “We can no longer continue to teach physics starting with theories developed in the 18th century!” protests Rolf-Dieter Heuer. “Current research on the universe, for example, is very appealing to young people. Schools should start by stimulating their curiosity and then gradually move on to the basics. CERN cannot develop a method that would suit all countries, but it can raise awareness and train teaching staff from all over the world. And UNESCO can convince political leaders that we absolutely have to make science subjects more attractive to pupils in secondary school, so that they are not turned off.” The struggle could be a long one. “I know, the battle is not going to be a walk-over. But if we don’t start with a battle, we have already lost!”

Basic science is another area where the objectives of the two organizations coincide. Decision-makers often perceive basic science as too abstract, because there may be no immediate applications for its results. But for RolfDieter Heuer, this is nonsense.

“I define basic science as open research with a focus on results, but not with a focus on application. Imagine if you had asked Wilhelm Röntgen to invent a machine to photograph your skeleton! He would never have come up with radiation. And yet, without any preconceived ideas, he discovered, in 1895, the X-rays that still underlie modern radiography.” There is no lack of examples to illustrate Heuer’s conclusion – “We never know when or how a result of basic science will be applied. But it always is, in the end, either directly or indirectly.”

The German physicist Rolf-Dieter Heuer took over as Director-General of CERN on 1 January 2009. He took up his post just as the Large Hadron Collier (LHC) started operating.