The Printed word: from movable type to the microchip

Only a few years ago, it was widely contended that one of the great transformations of modern society was the decline of the written and printed word and the rise to pre-eminence of the audiovisual media of communication. Today, to paraphrase a remark once made by the American humorist Mark Twain when news of his own death had been prematurely and inadvertently published, it may seem that reports of the demise of the printed word have been greatly exaggerated.

While for centuries after the invention of printing with movable metal type, printing processes remained essentially unchanged, today the production of books, periodicals and other forms of printed matter is being revolutionized by computerized type design and photocomposition, satellite text transmission and other new technologies.

Paradoxically enough, the development of microcomputers and "desktop publishing" in theory at least may offer its practitioners the extensive control over many stages of the printing and publishing process that was enjoyed by the European printers of 500 years ago.

This issue of the Unesco Courier presents some landmarks in the history of printing and publishing from the invention of paper in China 2,000 years ago to modern electronic breakthroughs. It is largely devoted to practical developments, ranging from the evolution of calligraphy and typography in late medieval Europe to methods of computerized typesetting in modern China.

Some of the problems ofprinting and publishing in the developing world are highlighted in an article on the book situation in India by Lokenath Bhattacharya, who reminds us that "the principal factors governing publishing activities in a country are its literacy rate, the size and nature of its educated population, and its educational policies and programmes". 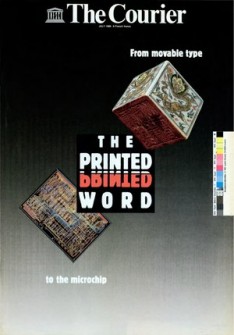