Radio: Stronger and more vibrant than ever 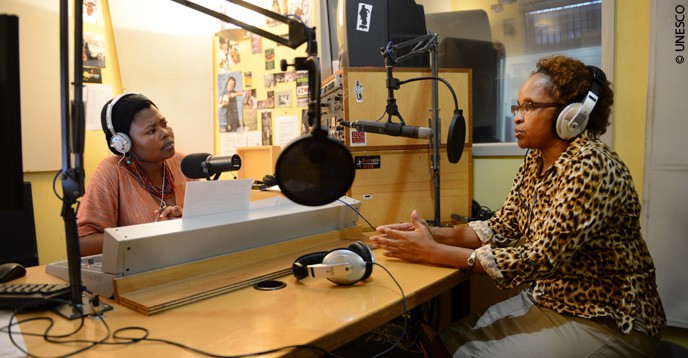 Half the programmers at Bush Radio, a community radio station in Cape Town, South Africa, are women.

First the arrival of television, then the emergence of the internet, followed by the eruption of social networks – all these should have gotten the better of it. Yet, radio continues to broadcast and echo what is happening in the world today. Since 2011, it has even had its own World Radio Day, celebrated on 13 February every year – with diversity as its theme in 2020.

Certainly, after a century of existence, the medium has changed. Transistors have given way to computers and mobile phones. The invention of the podcast in the 2000s has made it possible to develop new kinds of radio scripts and create programming that is free of the constraints of live broadcasts.

Radio Ambulante, a Spanish-language podcast service, for example, delivers long-form stories drawn from the daily lives of people in the Americas – as its founder, Carolina Guerrero, explains.

China’s digital platform, Himalaya FM, has also succeeded in meeting its challenge of enabling professionals and amateurs alike to create paid content, on demand. In just a few years, it has become the country’s most popular audio network.

This podcast boom has not meant the end of FM radio, however. In Burkina Faso, where there are no fewer than 154 active radio stations, the enthusiasm of citizens for this medium remains intact – allowing even those in remote areas to stay informed and take part in the debates that are making news in the country.

With the rise of social media, citizen listeners can express their opinions live on air, and even help shape their programmes. Radio stations, whether FM or digital, must now deal with this new form of citizen participation.

They have also had to give more space to women, who have been regular listeners since the early days of the medium.

In spite of technological developments and modes of consumption, radio remains a voice. A voice that seems to speak to us alone. A voice that speaks to our imagination, especially at night, that special time when more intimate, less constrained, words can be used on air.

Radio is also a voice through which world news is told. Like that of Mark Tully, a legendary figure of the BBC in India, who, for nearly twenty-five years covered the news at a time when radio was the principal means of communication in this country of more than a billion people.

From Algeria to Mexico, from the Comoros to China, via the United States and  Guinea-Bissau – photographer Nadia Ferroukhi explores different facets of matriarchal societies in her series In the Name of Mother, in Zoom.

Were prehistoric humans savages, always ready for a fight? Not necessarily. In the Ideas section, prehistorian Marylène Patou-Mathis, research director at the French National Centre for Scientific Research (CNRS), challenges preconceived ideas about our ancestors, and shows that collective violence actually started with sedentarization.

In Ayka, she plays a Kyrgyz migrant forced to abandon her newborn, and a part of herself, in the hope of a better life in Moscow. Kazakh actress Samal Yeslyamova and Sergey Dvortsevoy, director of the 2018 film, are Our Guests.

In the Current Affairs section, the Courier takes a detour into the past to look at the League of Nations, the international organization founded a century ago, which was the origin of the International Commission on Intellectual Cooperation, the forerunner of UNESCO.

Helen Pankhurst, great-granddaughter of Emmeline Pankhurst, the emblematic figure of the suffragette movement in the United Kingdom, discusses the successive waves of feminism, while tracing the history of this movement which fought for women’s right to vote.

The League of Nations: A universal dream that has stood the test of time
Helen Pankhurst: “Feminism is in my blood”