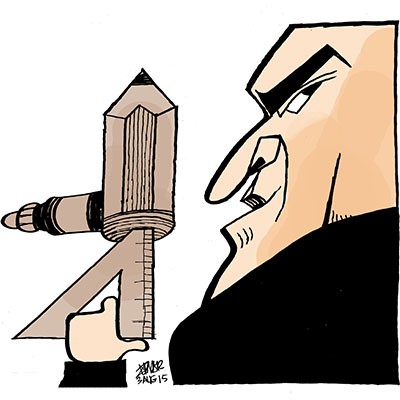 With his slogan, “How Can I be Neutral, Even My Pen Has a Stand”, Zunar exposes corruption and abuse of power committed by the government of Malaysia through his art. Until 2018, he was facing nine charges under the archaic Sedition Act, was subject to a travel ban and facing possible 43 years imprisonment. The previous Malaysian government had banned five of his cartoon books on the ground that their content was “detrimental to public order.” Charges against him were dropped following a change of government. Zunar was the only Malaysian selected by Amnesty International for their biggest annual international campaign, “Write for Rights (#W4R) 2015”. He won the Cartooning for Peace “International Press Cartoon Award” in May 2016 in Geneva, the “Courage in Editorial Cartooning Award 2011” by Cartoonists Right Network International (CRNI), the Human Rights Watch Hellman/Hammett Award in 2011 & 2015 and the “International Press Freedom Award” from the Committee to Protect Journalist (CPJ), New York 2015.