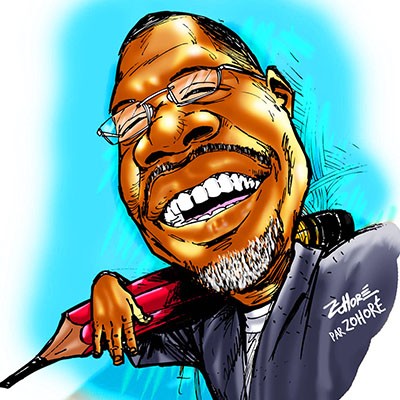 Currently Cartooning for Peace ambassador for Côte d'Ivoire, Lassane Zohoré (Zohoré) became the cartoonist for the column “Le sourire du jour” in the Ivorian daily newsaper Fraternité Matin in 1985. Several newspapers, including Courrier International and Jeune Afrique, solicited his talent. International institutions and NGOs such as Reporters Without Borders have also often used his cartoons as part of awareness-raising campaigns. Beside his work as a cartoonist, Zohoré co-founded the journal Gbich! with Illary Simplice in 1999, of which he has been the publishing director since its creation. Author of various comic books, he is also the president of Tâche d'encre, the association of press cartoonists and comic strips of the Ivory coast, and of Coco Bulles, the International festival of press cartoons and comics in The Ivory coast. He is the 2nd vice-president of the Press Publishers of the Ivory coast association (GEPCI).